Here’s every song that Robin Scherbatsky (Cobie Smulders) performed under her teenage pop star persona, Robin Sparkles, in How I Met Your Mother. While growing up in Canada, Robin became a teenage music sensation by performing in malls across the country. Robin wore an ’80s outfit despite the fact that she toured in the ’90s, since Canada was said to be a decade behind in trends.

The song featured in “Slap Bet” was Robin Sparkles’ breakout single, “Let’s Go to the Mall”. She released it in 1993 when she was just 16-years-old. Robin performed the song at malls across Canada and stated that she lived off of Orange Juliuses and Wetzel’s Pretzels. Robin’s musical history was based on Alanis Morissette, but the single itself was inspired by the song “I Think We’re Alone Now”, by Tiffany. She performed the song across malls in 1987 and wore a personalized denim jacket, just like Robin Sparkles. But that wasn’t the end of Robin’s journey as a musical artist. 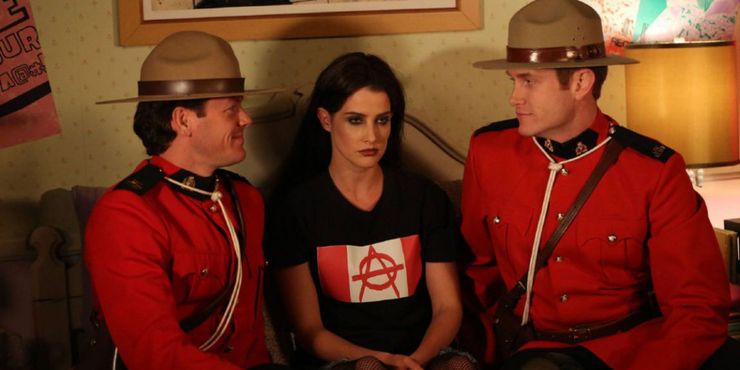 Robin Sparkles follow-up to “Let’s Go to the Mall” came in the form of “Sandcastles in the Sand”. The song was featured in How I Met Your Mother season 3, episode 16, after Robin reunited with an old boyfriend, Simon (James Van Der Beek). The artistic ballad featured Simon in the music video as well as Tiffany and ’80s star Alan Thicke. The song, however, was not as successful as “Let’s Go to the Mall”. Robin did rejoin Alan Thicke for another project during her time as Robin Sparkles. In the season 6 episode, “Glitter,” Robin revealed that she starred in a Canadian children’s show, Space Teens, with Thicke and her best friend, Jessica Glitter. Robin and Jessica were shown performing the song, “Two Beavers Are Better Than One”, during an episode of the kids’ show.

In the mid-’90s, Robin Sparkles took a dark turn and she transformed into the grungy Robin Daggers. In How I Met Your Mother season 8, episode 15, Robin revealed that she was obsessed with a man as a teenager. Barney did some more digging and unearthed an episode of Underneath The Tunes featuring Robin Sparkles. In the episode, she turned into Robin Daggers and sang a song called “P.S. I Love You”. The song was aimed at Robin’s obsession with Paul Shaffer. Her record label refused to release the title and her time in music came to an end.

Just because Robin’s career as Robin Sparkles was over on How I Met Your Mother, that doesn’t mean her accomplishments weren’t totally forgotten. Robin’s friends would not let the Robin Sparkles revelation go and Ted (Josh Radnor) even used “Let’s Go to the Mall” as his ring-tone for a time. Marshall also performed the song during karaoke at the Hoser Hut, a Canadian bar in New York City. Robin eventually embraced her past and she walked down the aisle to an instrumental version of “Sandcastles in the Sand” when she married Barney.