1. When the script for the original pilot was released in 2014, it became clear that things could have been very, very different had the writers stuck to the initial idea. 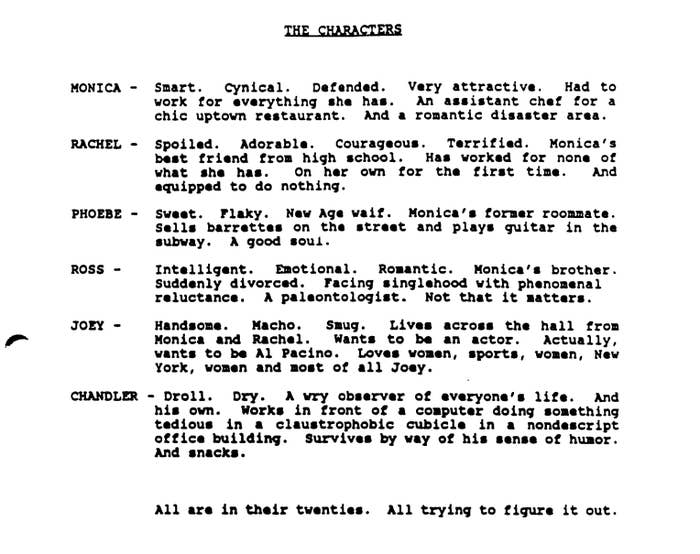 2. For one, Monica and Rachel wouldn’t have reconnected. 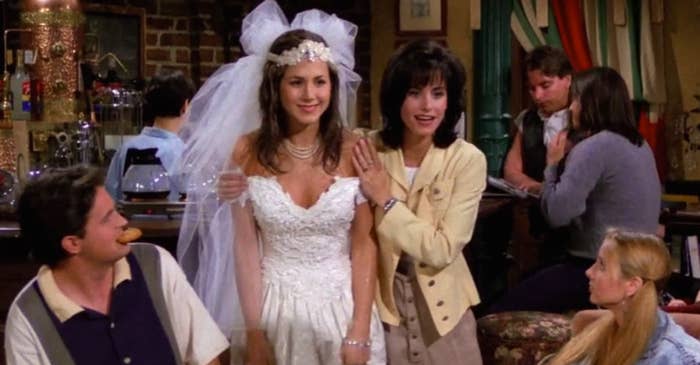 In the script, Monica was very reluctant to reconnect with Rachel because she was jealous of her wealth and mad that she wasn’t invited to her wedding. In fact, unlike the version we’ve come to know and love, in the pilot Monica didn’t offer Rachel a place to stay and was also very persistent in trying to get her to leave.

3. Ross’ job wasn’t intended to be integral to his character — in fact, the character description of him from the original pilot reads: “A palaeontologist. Not that it matters.” 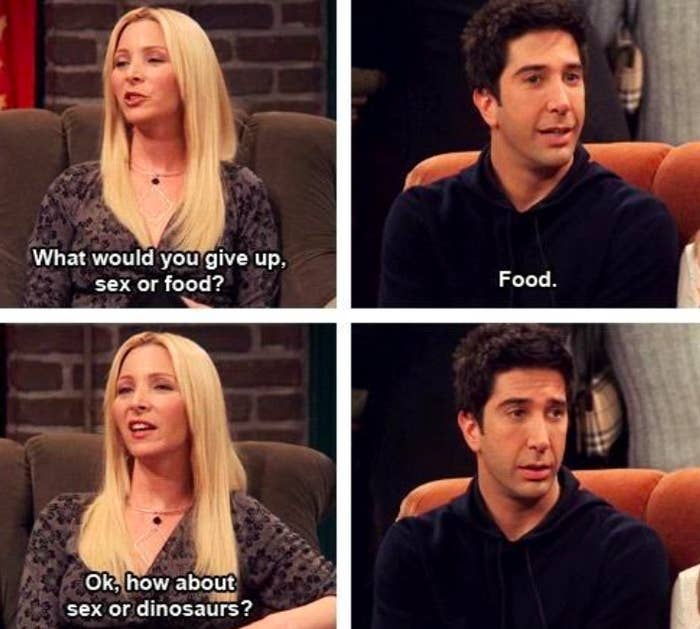 Can you imagine a world in which Ross didn’t speak about dinosaurs every five minutes?

4. Phoebe was originally written as a “serial monogamist.” She was described as the kind of person who “doesn’t date, but just moves in with guys.” 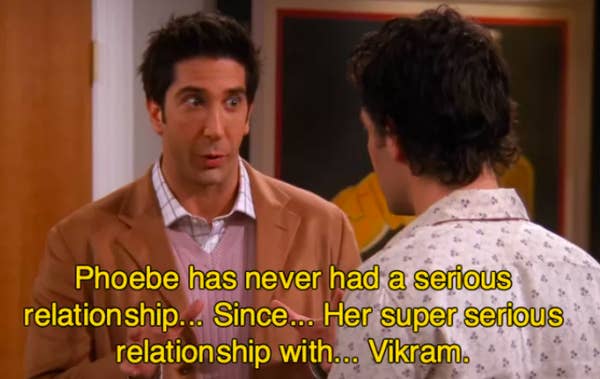 A far cry from the woman who had never had a serious relationship with a guy until she met Mike in season nine. 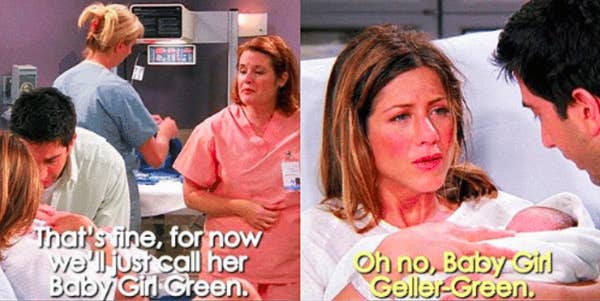 6. If the creators of the show had taken the cast’s advice, the Rachel/Joey storyline would never have happened. 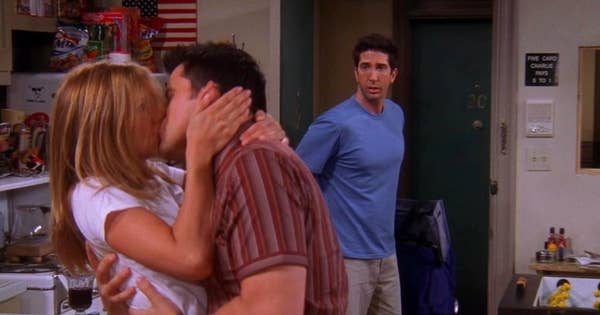 The entire cast were vehemently against the storyline, with Matt LeBlanc saying he felt the whole thing was “wildly inappropriate.” David Schwimmer later recalled that the cast went to the show’s creators and said: “We’re really concerned about this. It doesn’t feel right. We have a problem with it.” However, the creators told them: “Yes, it’s absolutely wrong. That’s why we have to do it.” You can’t just keep spinning the same plates. You have to go places where you’re not expected to go.” 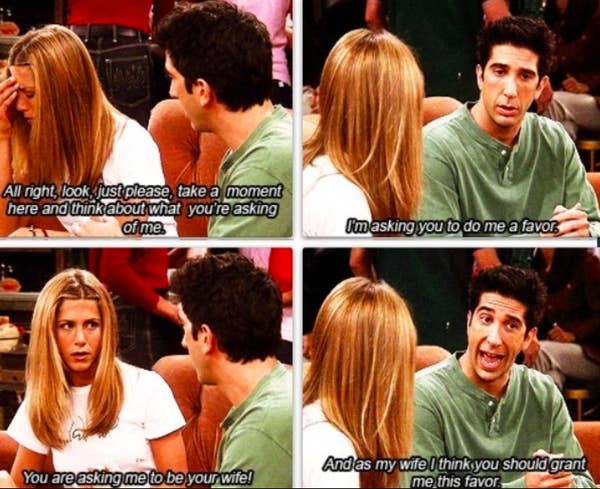 David has since said: “The whole arc of the relationship was weird then. For him to be able to move on enough to marry someone else, and then go back to being in love with Rachel later just went a bit too far.”

8. Lisa Kudrow and Matt LeBlanc once pitched a story idea in which it would be discovered that Phoebe and Joey had been having casual sex the entire time.

The idea was to reshoot the show’s most iconic scenes, but right before the most memorable moment, Joey and Phoebe would emerge from a cupboard together. The writers turned the idea down.

9. There was also supposed to be a storyline in which Chandler went to a male strip club because he really liked the sandwiches. Matthew Perry convinced the writers to scrap it. 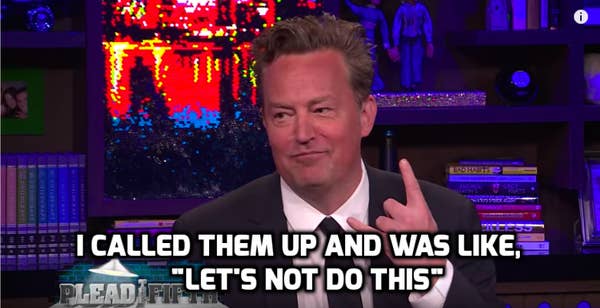 10. There was a whole scene about hijacking and bombs cut from an episode in season nine because it was due to air in the weeks after 9/11. 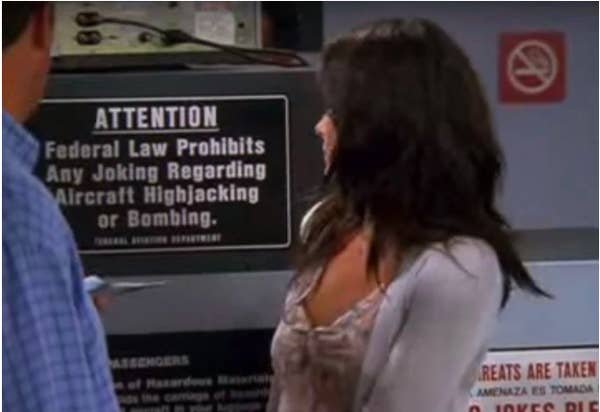 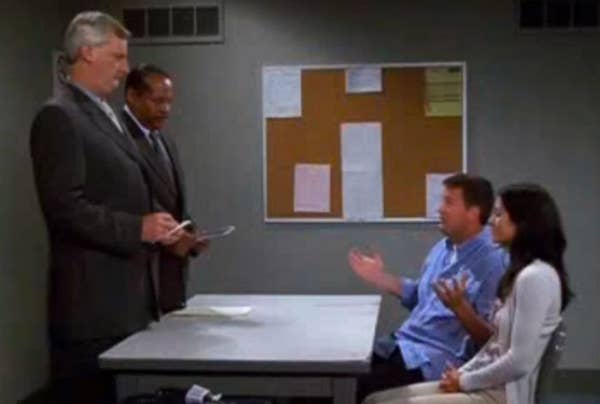 In “The One Where Rachel Tells Ross,” Monica and Chandler head off on their honeymoon. Having spotted a sign in the airport which said: “Jokes regarding aircraft hijacking or bombing are prohibited,” Chandler couldn’t resist quipping: “You don’t have to worry about me, I take my bombs very seriously.” Security guards immediately pounced and took him and Monica away for questioning. Producers decided the scenes would be too insensitive to air in the wake of 9/11, and so hastily re-wrote and shot the scene.

11. Joey was always intended to be a ~womaniser,~ but Matt LeBlanc quickly became concerned that the character was so “creepy” that he wouldn’t have any longevity. 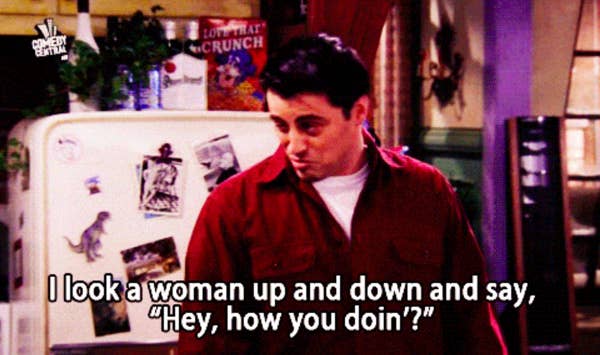 In fact, Joey’s character was initially so predatory and creepy that Lisa Kudrow, Jennifer Aniston and Courteney Cox were afraid of and nervous around Matt LeBlanc when they first met him.

12. So, Matt LeBlanc went to the creators of the show and made a “creative suggestion” to mould Joey into a more appealing and realistic character. 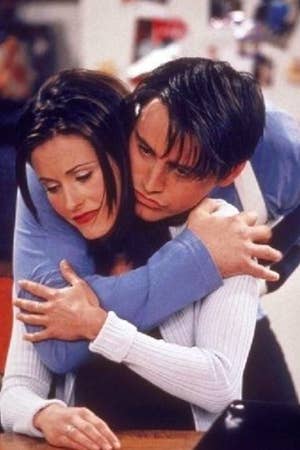 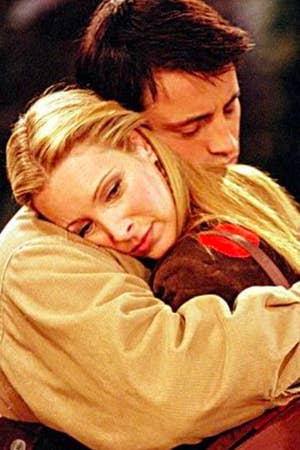 Matt later revealed he’d asked the creators: “Could it be that Joey thinks of these three girls as little sisters, and wants to go to bed with every other girl in New York but these three? Then I’d buy that they’re friends. Otherwise, I just don’t think they’d even talk to him if he hits on them every single time.”

13. The writers set about making the changes to Joey’s character immediately, ensuring he was more dimensional while retaining his womaniser status. However, this change meant that the original central romance between Monica and Joey, which was planned from the start, was scrapped. 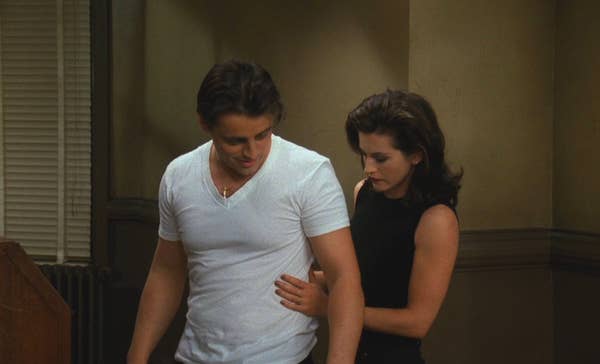 Yep, that’s right — the writers intended Monica and Joey to be the show’s romantic leads because they were the “most sexual” of the characters.

14. Courteney Cox was originally asked to play Rachel. However, after reading the scripts, she requested to audition for Monica instead, feeling that she “related” more to her. 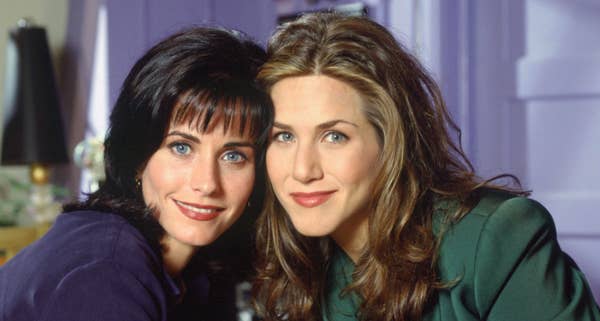 15. However, the writers had envisioned Monica as dark, edgy and snarky and so were unsure whether Courteney would be right for the role. But, after her audition, they decided that her portrayal of the character was “a lovelier place to go.” 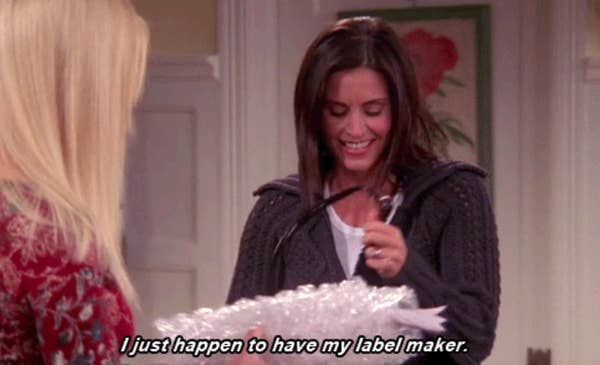 16. Joey was never written as dim — the writers decided to make it part of his character thanks to Matt LeBlanc’s skill at playing dumb. 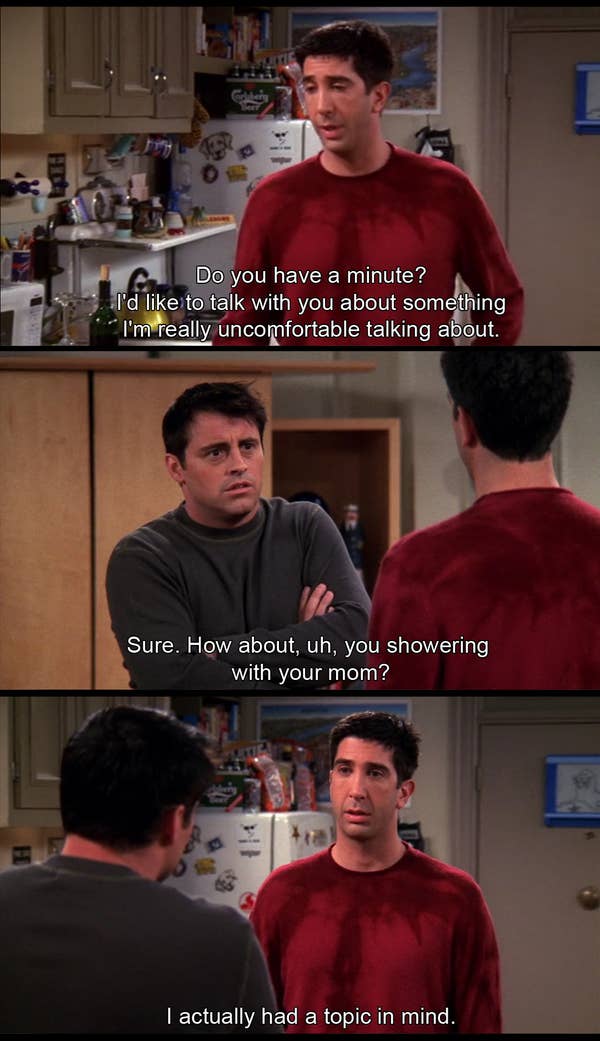 17. Hank Azaria had his heart set on playing Joey. He was so desperate for the role that after being rejected a first time, he begged for a second audition. He didn’t get the role, but further down the line was cast as Phoebe’s boyfriend David. 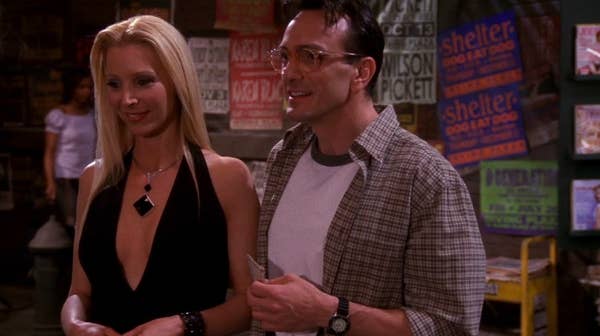 18. The character Charlie only came about because of the criticism levelled at the show for not being diverse enough. 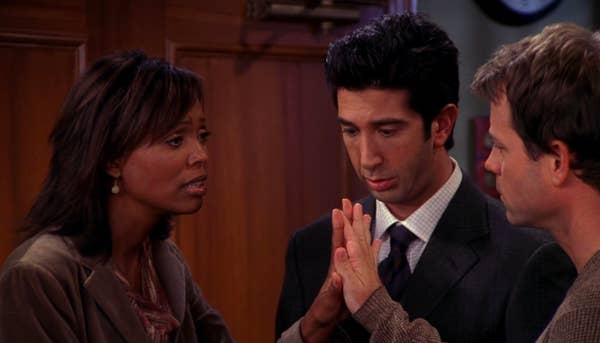 Charlie was therefore specifically created and Aisha Tyler cast to address the issue.

19. Ellen DeGeneres was offered the role of Phoebe, but turned it down. 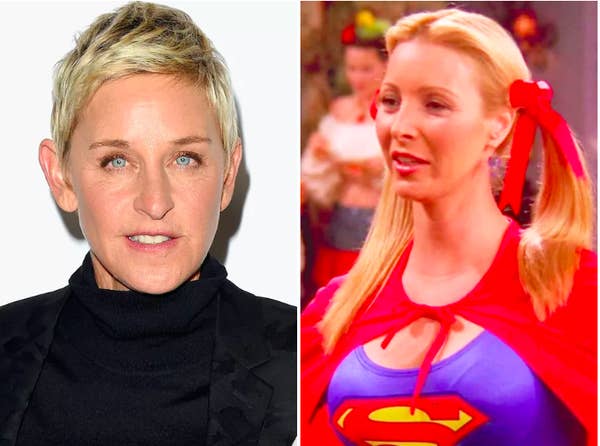 20. The show’s original theme song was “Shiny Happy People” by R.E.M. In fact, the song was even used in the pilot episode, but was eventually switched out in favour of “I’ll Be There For You” at the suggestion of one of the producers.

21. And the show also went through a series of title changes — in fact, Friends very easily could have been called Insomnia Cafe, Six of One, or Friends Like Us. 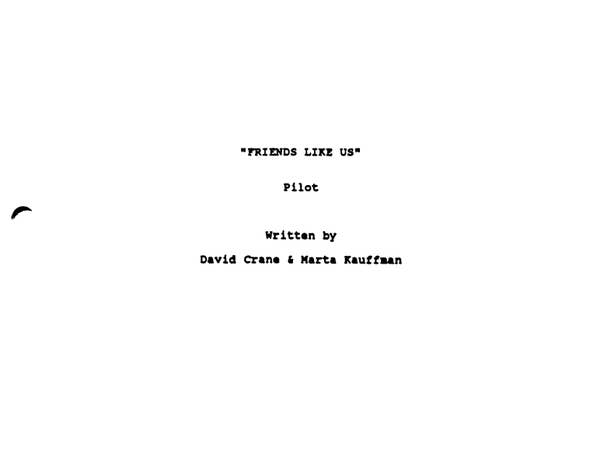