Monica has had some bad relationships in Friends, but one deleted scene makes her weirdest romance even worse. Before Chandler (Matthew Perry), Monica’s (Courteney Cox) most stable boyfriend in Friends was Richard Burke (Tom Selleck). Richard first appears in Friends season 2. He’s around two decades older than Monica and her parents’ friend, so their relationship has some snags early on; however, the pair remain into each other. Though they eventually break up because Monica wants children, Richard remains an option for Monica even up until Chandler’s proposal in season 6.

Though Richard is an exception, Monica has dated awful people. In season 1, Monica went out with Paul the Wine Guy (John Allen Nelson), who lied to her about not being able to perform sexually. Monica later learns it was just a line Paul tells women. Season 3 introduces another of Monica’s problematic exes, a co-worker named Julio (Carlos Gómez). He makes a poem about an empty vase, which Monica initially likes. However, she is later insulted, thinking Julio’s poem is saying she’s empty inside. Julio assures her it’s not about her. It’s actually about “all women.” From misogynists to man-children, Monica doesn’t have a lot of luck in the dating scene.

While many of Monica’s relationships are terrible, an extended scene from season 4 puts her worst one in a new light. In the season 4 episode, “The One With Chandler In A Box,” Monica goes to the eye doctor, who turns out to be Timothy (Michael Vartan), Richard’s son. Monica invites him over to spend Thanksgiving with her friends, and the pair eventually kiss. It doesn’t go well since it reminds Monica a little too much of Richard. However, an extended scene (via YouTube) shows Timothy has a problem too. “You know what the worst thing is for me is that you actually remind me of a younger version of my mom,” he says. 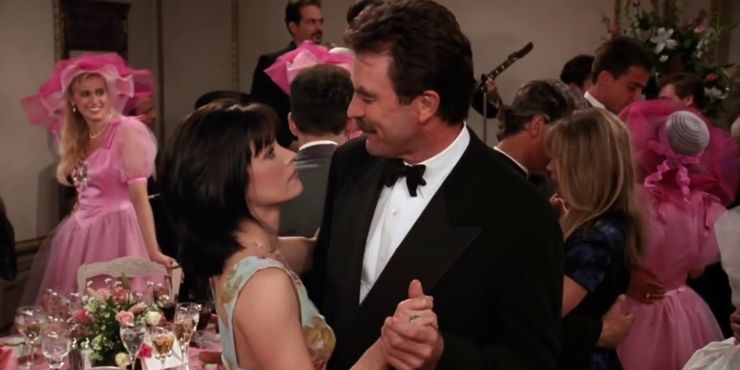 The line makes the moment even worse. For Monica, kissing Timothy is like kissing Richard. For Timothy, kissing Monica is like kissing his mom. Timothy’s line about his mom repulses Monica, making her turn around in disgust. It’s also extra strange because Monica was the one who backs out of a second kiss. Despite thinking she was like his mom, Timothy had no qualms about kissing her again. Thankfully, Timothy wasn’t in additional episodes, so that oddity didn’t need to be explained.

While Timothy’s line makes the weird Friends relationship even weirder, it also give some other character insight. Perhaps Richard was so in love with Monica because she reminded him of Timothy’s mom, Barbara, a woman he once loved. The reason Richard and Barbara divorced isn’t clear, but the pair once had a strong marriage. In season 2, he says she was his high school sweetheart, and that they were married for 30 years. Though the Friends extended scene definitely makes Monica’s relationship with Timothy weirder, it also further explains her connection with Richard.