1. Hermione’s logic puzzle in the Sorcerer’s Stone film is nowhere to be seen.

“IN THE MOVIE THEY TOOK AWAY HERMIONE’S LOGIC PUZZLE THAT GOT HARRY INTO THE [Sorceror’s Stone room].”

“Was Hagrid exonerated? Was he able to use magic legally again? Was he given a chance to finish his studies? This bothers me more than it should.”

3. Harry breaks the Elder Wand before he fixes his own.

“Literally would have taken an extra 0.5 seconds of film time.”

4. Where the bleeping heck is all the cool stuff in the maze?

“The final challenge in the Triwizard Tournament in the fourth movie grinds my gears. I wanted to see a Sphinx and other giant creatures in a maze. What we got was Poison Ivy’s leftover trimmings and some stiff breezes. Where’s the challenge in that?”

“It infuriated me when Harry didn’t tell McGonagall that Umbridge made him write with the punishment quill in The Order of the Phoenix.”

6. If Harry had opened his gift and used the mirror, Sirius might still be alive.

7. The Burrow burning down.

“Literally the fact that in the sixth movie, the Burrow burns down! When does that happen in the book? WHEN?????”

8. The Dursleys never get the punishment they deserve.

“When the Dursleys never got charged or prosecuted for child neglect, verbal abuse, emotional abuse, mental abuse, and possible (?) physical abuse. I mean, hello! His first letter was addressed to, and I quote, ‘The Cupboard Under the Stairs.'”

9. Ron and Harry get seriously mad at Hermione when she’s worried the broomstick sent to him has been jinxed.

“I fucking hate when Ron and Harry turn on Hermione in Prisoner of Azkaban just because she was concerned that a broomstick sent from an anonymous person might have come from that serial killer who was currently trying to murder Harry. Like all that happened was the Firebolt got screened by the professors and given back.”

10. The fact that they don’t use the Time Turner to stop Wormtail from escaping…

“If I honestly have to pick one moment, I would have to say Harry and Hermione not using the Time Turner to stop Peter. By this point, they’ve already broken a million rules — what stopped them from breaking this one? Other than plot, don’t @ me.”

“The one that always bothers me is in Prisoner of Azkaban. Why didn’t anyone just petrificus totalus Wormtail when they were in the Shrieking Shack? Sirius could have cleared his name and Harry would’ve been free of the Dursleys.”

“In the books, it was: ‘Tom Riddle hit the floor with a mundane finality, his body feeble and shrunken, the white hands empty, the snake-like face vacant and unknowing.’

13. How Cedric’s “hint” for Harry is pretty much useless. 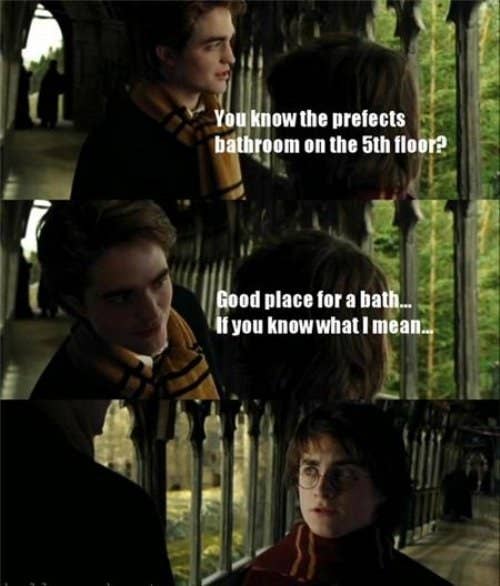 “The fact that Harry straight up told Cedric about the dragons (‘Dragons. That’s the first task’), and then in return, Cedric only *hinted* about egg and taking a bath. Harry can’t even get a ‘Swimming for a long time is the second task’ or at least a ‘Put the egg under water to listen to it’?”

14. Lupin never explains to Harry how he knows what the Marauder’s Map is in the third film.

“In the Prisoner of Azkaban movie, neither Lupin nor Sirius ever explains to Harry who Moony, Wormtail, Padfoot, and Prongs are, yet somehow, Harry isn’t one bit curious how Lupin knows what the Marauder’s Map is and how to use it. I sometimes wonder how movie-only fans even understand the films with so many unexplained plot holes.”

15. The fact that Dumbledore has no idea the freakin’ Dark Lord is on the other side of Professor Quirrell’s face.

“Honestly, like, I love Dumbledore — he is so smart and witty and elegant AF, and he always seems to know everything that’s going on — but how did he not figure out that Voldemort was living under Quirrell’s turban for an entire year? Like, he knows where the horcruxes are, but Voldemort’s face on top of someone’s head is too much for him.”

17. Every time Lockhart suggests that Harry is a fame seeker. 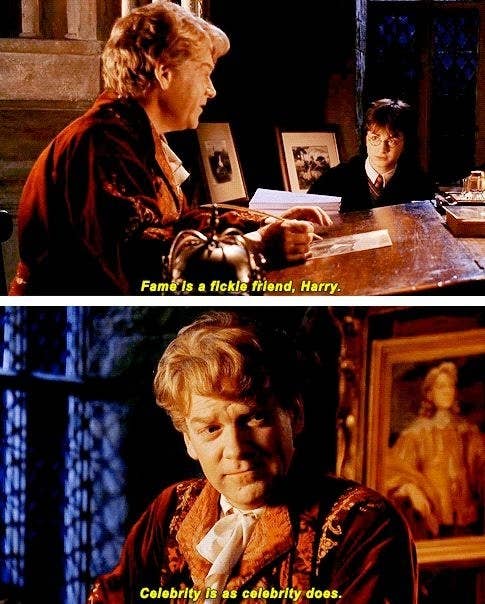 “Not to mention he literally removed all the bones in Harry’s arm.”

18. The lack of chemistry between Ginny and Harry in the movies.

“I’m weird and saw the movies first, and I didn’t get that pairing at ALL until I read the books.”

19. Book Hermione never would have asked this question.

“In the book, Seamus is the one who asks Sir Nicholas, ‘How can you be nearly headless?’ Hermione would never have asked anything like that so rudely.”