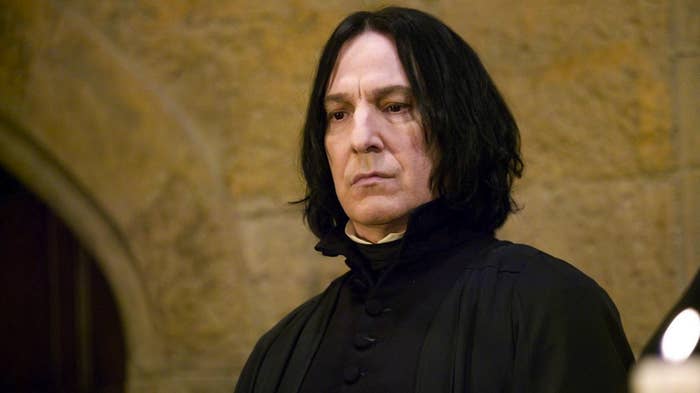 Yes, he betrayed Voldemort to help the good guys, but only after he heard the Dark Lord was going to murder the woman he loved. Yes, he killed Dumbledore, but only because Dumbledore asked him to. THERE ARE LAYERS.

Even his creator agrees.

One thing we can all agree on, though, is that he’s dead. It’s been almost seven years since Snape died onscreen in Harry Potter and the Deathly Hallows — Part 2, after it was revealed he’d spent his time at Hogwarts working closely with Dumbledore to protect Harry.

Or, perhaps more truthfully, to preserve what Harry represented: the last remaining genetic bit of the only woman he ever loved, Lily Potter.

Now, I think most of us have seen all the Harry Potter movies quite a few times over the years. We can quote them, we know where the Easter eggs are, and we’ve watched every behind-the-scenes feature. But today I discovered a detail that has somehow escaped me for the past almost-seven years.

Earlier in Deathly Hallows — Part 2, before he dies, Snape briefly battles Professor McGonagall. It’s tense and badass and my girl, of course, wins.

But there’s a very quick moment you might have missed:

It looks like Snape blocks and then redirects McGonagall’s spell so that it hits the Death Eaters behind him, Alecto and Amycus Carrow, thus helping Harry and the other waiting Order members.

Yes, this detail has been out there for a while, but I just saw it today and I am shook, so you’re gonna be shook with me.

Just one more Snape Layer to add to the pile.