1. Pam and Jim from The Office

“After rewatching the show, I hated how Jim treated Pam after they got married. Pam gave up everything for Jim and she didn’t even get to follow her dreams. They’re an overrated couple. I’d never want to be the woman in that relationship. Pam definitely got the short end of the stick.”

2. Meredith and Derek from Grey’s Anatomy 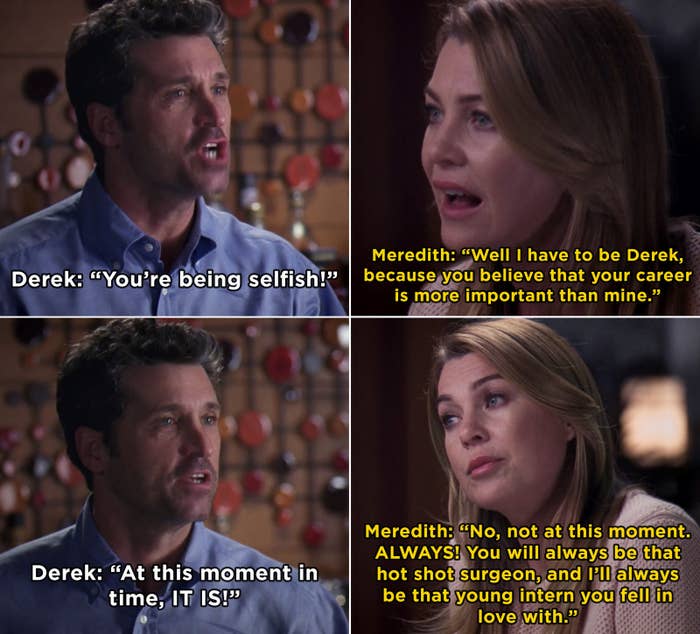 “In the beginning, I loved them so much, but by the end Derek was forcing her to put her dreams on hold for his. When the show briefly introduced Riggs as Meredith’s potential love interest, I realized how toxic Meredith and Derek were together. Meredith deserved so much better than selfish Derek.”

“I used to be obsessed with their relationship, but looking back, they shouldn’t have been together because he was her teacher and he knew she was younger than him when they first hooked up in that bathroom. He was also seeing Alison before that! So, Ezra had a pattern of being creepy!”

4. Rory and Dean from Gilmore Girls 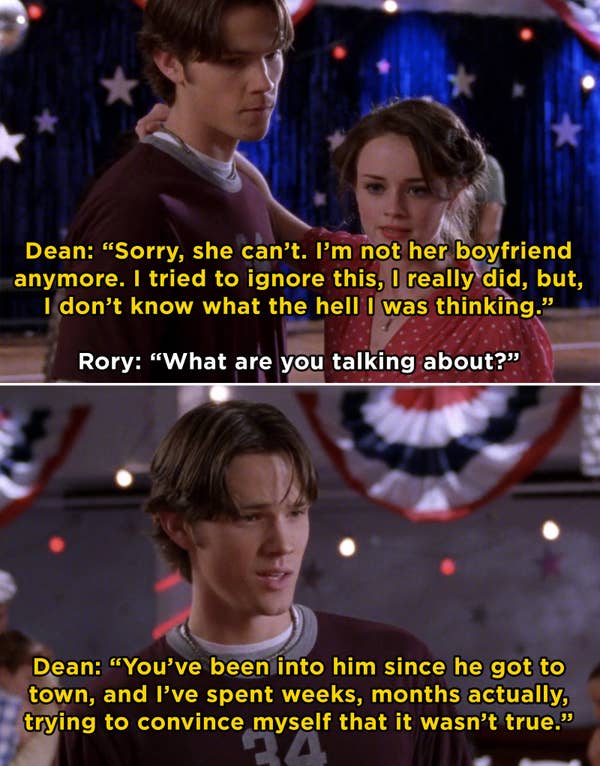 “When I rewatch their relationship unfold as someone who has now been in a healthy relationship, I realize how shitty and immature Rory and Dean were. They had very little in common, Rory regularly lied to him and cheated on him (both physically and emotionally), and Dean was possessive and jealous.”

5. Ross and Rachel from Friends 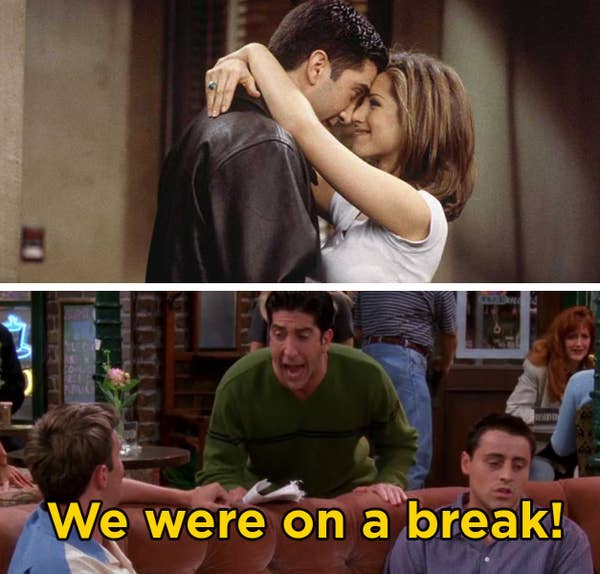 “The first time I watched Friends, I was so happy that Rachel chose to stay with Ross. They were one of my favorite couples on the show. When I watched the show for a second time, I realized how horrible Ross was to Rachel. He cheated on her because ‘they were on a break,’ and when she found out, he basically begged her to stay with him. And then at the end of the show, Ross literally told Rachel to pick him over her dream job in Paris. If I were Rachel, I would’ve stayed on that plane.”

6. Ted and Robin from How I Met Your Mother 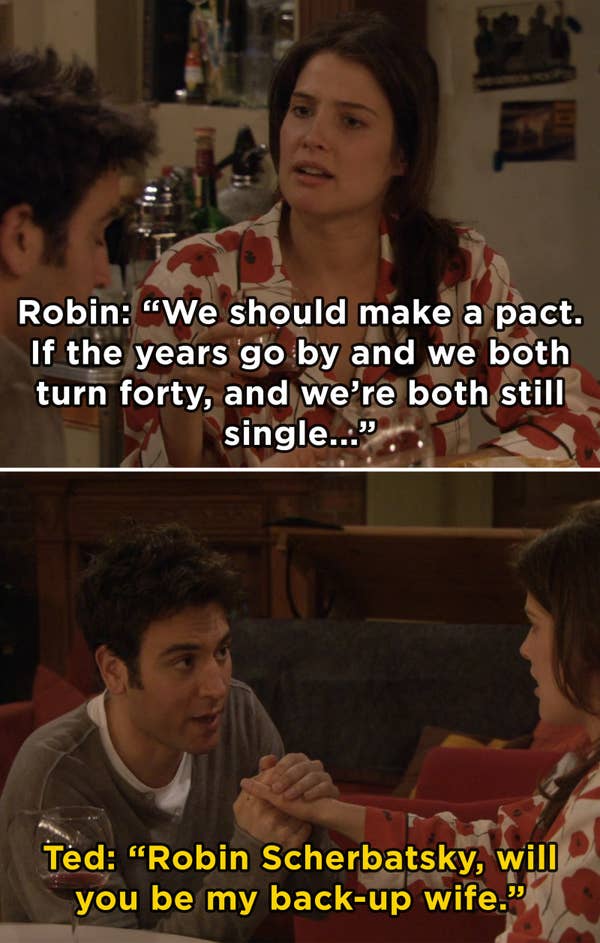 “I initially loved them together, but as the story went on I started to realize they were so annoying together.”

7. Dan and Serena from Gossip Girl 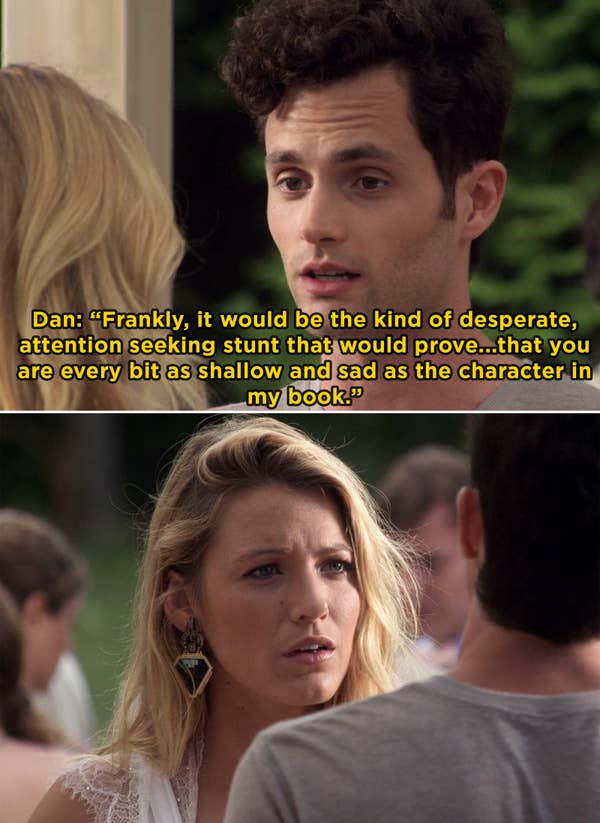 “They were my ultimate OTP growing up. After a recent rewatch I realized how awful Dan was as a person, but also how awful he made Serena be when she was with him. She deserved better.”

8. Damon and Elena from The Vampire Diaries 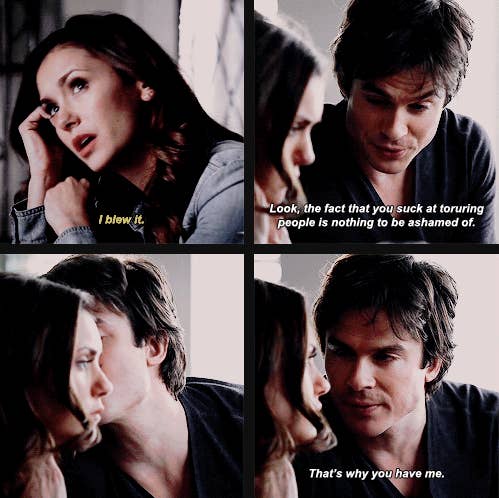 “I used to love them, but after rewatching the series, it’s so clear how Stefan and Elena should have been endgame. They were totally meant for each other.” 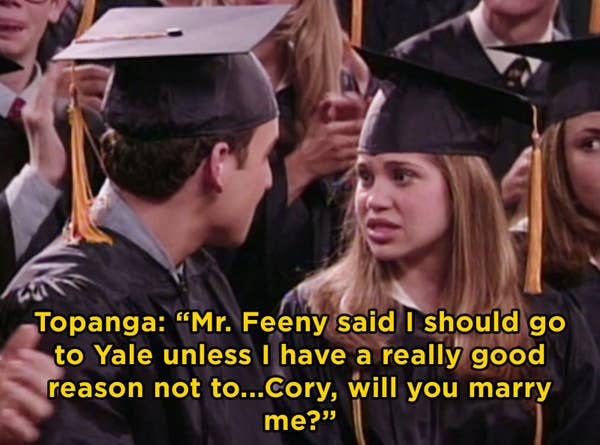 “I was obsessed with their relationship as a kid but now looking back it makes me cringe. She gave up going to Yale FOR A BOY!”

10. Owen and Cristina from Grey’s Anatomy 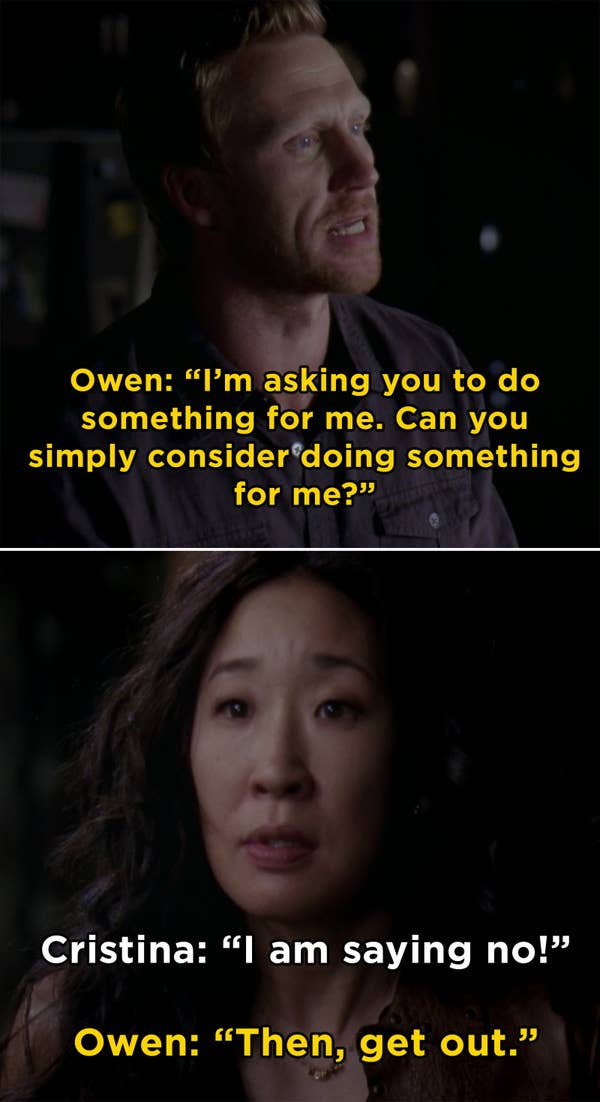 “At first I loved them, especially when Cristina helped Owen overcome his PTSD. Then I realized Owen was a complete jackass. He tried to force Cristina to get pregnant even though she didn’t want kids even BEFORE they got married. He even cheated on her! I’ve hated him ever since and then he did the same crap to Amelia.” 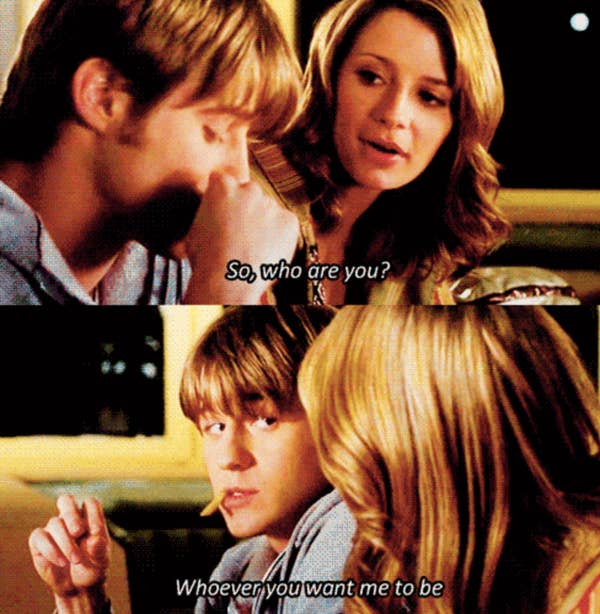 “When I was 19 it was so romantic, but now I see how toxic their relationship was when I rewatch the show as an adult.” 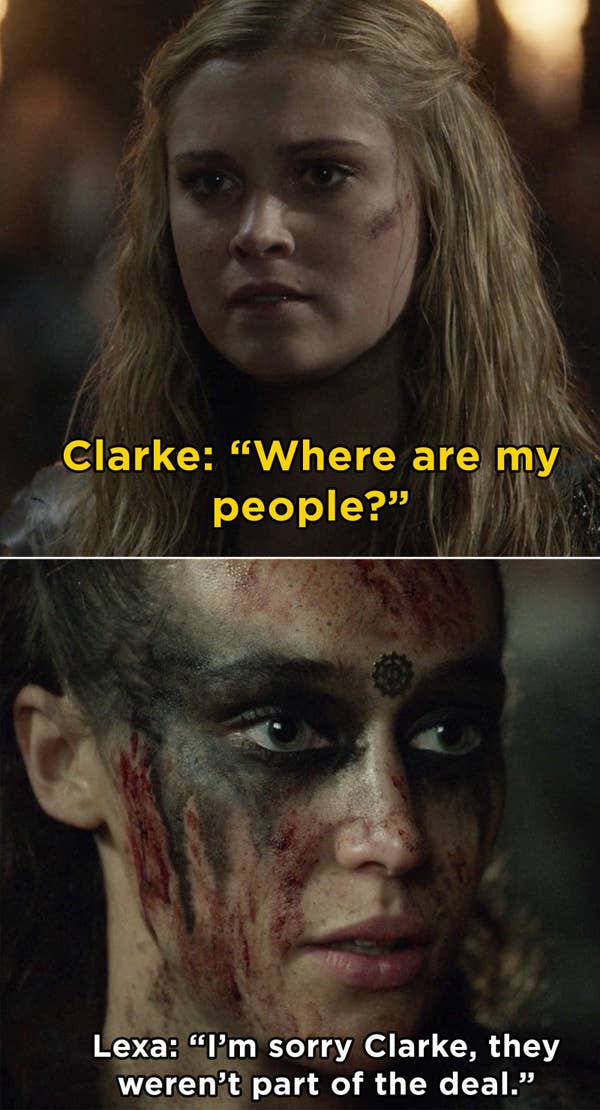 “I started watching The 100 because I saw pictures of Lexa and Clarke and thought ‘hell yeah, queer girl representation’ but then they actually introduced Lexa and she was really creepy and manipulative and Clarke deserved way better.”

13. Veronica and Archie from Riverdale

“When they first got together, I liked it, but currently in Season 2, they’re both so damn unlikeable! All they do is have sex and screw over their friends by working with Hiram Lodge.”

14. Barney and Robin from How I Met Your Mother

“Don’t get me wrong I love Neil Patrick Harris and Cobie Smulders, but now I just can’t fathom why anyone would want to be married to either of them. They’re both kind of the worst.”

“As a kid I thought they were meant to be together because they were the original OTP and I hated Hyde for ‘stealing’ Jackie away. But now I realize that they were horrible for each other and as sweet as they were, they would have never worked out.”

16. Buffy and Spike from Buffy the Vampire Slayer

“I used to love Buffy and Spike as a teen. But after rewatching the show a few times, I realized how destructive and full of self-loathing their relationship was. It was so unhealthy that it completely spoiled the romance of it.”

17. Chandler and Monica from Friends 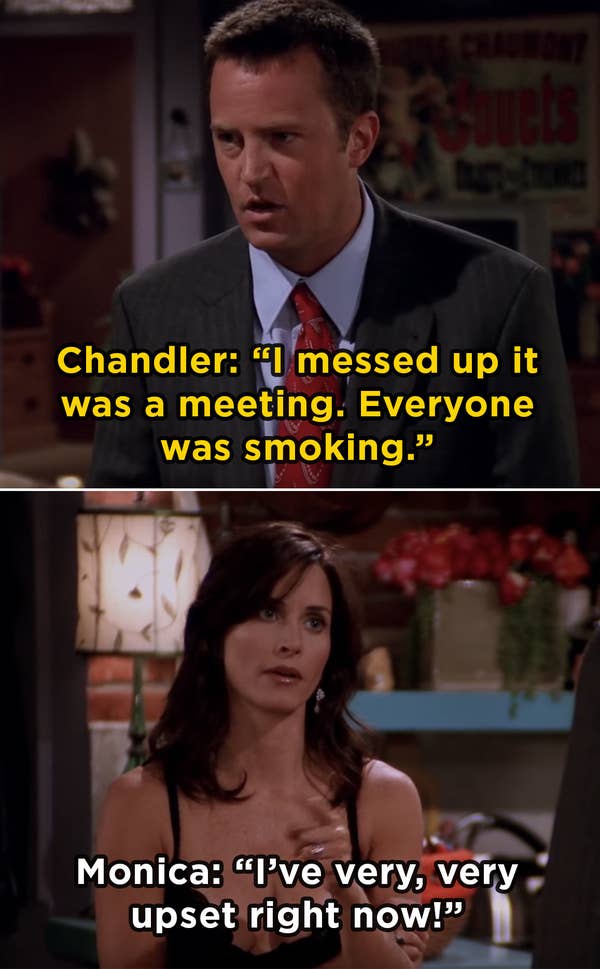 “Rewatching the show, I realized that most of the time they’re that awful couple that is constantly bickering. You almost never see them having fun with each other, they just fight and make up over and over again. I understand long term relationships go through ups and downs but they had way too few ups so it didn’t seem worth it.”

18. Chuck and Blair from Gossip Girl

“As a 16-year-old I was OBSESSED with their relationship but damn as an adult, I hate that whole relationship. Blair deserved someone better than the guy who sold her for a fucking hotel. Not to mention the intense emotional manipulating he did.”

19. Carrie and Mr. Big from Sex and the City

“Mr. Big never respected her. Carrie needed a Steve or a Harry!”

20. Lucas and Peyton from One Tree Hill 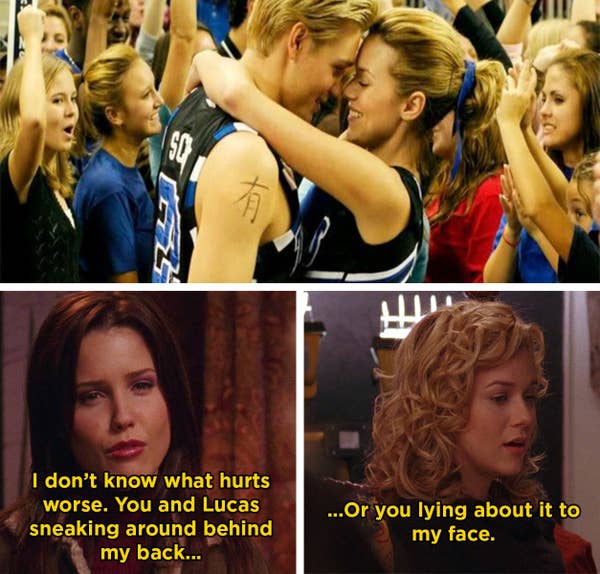 “When I first watched the show I was so excited when Lucas said he wanted her to be standing next to him when all his dreams came true. But when I rewatched it, I realized that their relationship was extremely volatile. They didn’t trust each other, they were constantly fighting, they would only support each other when it was convenient, and their relationship was basically built on Lucas cheating on Brooke in order to be with Peyton.”

21. Rory and Jess from Gilmore Girls 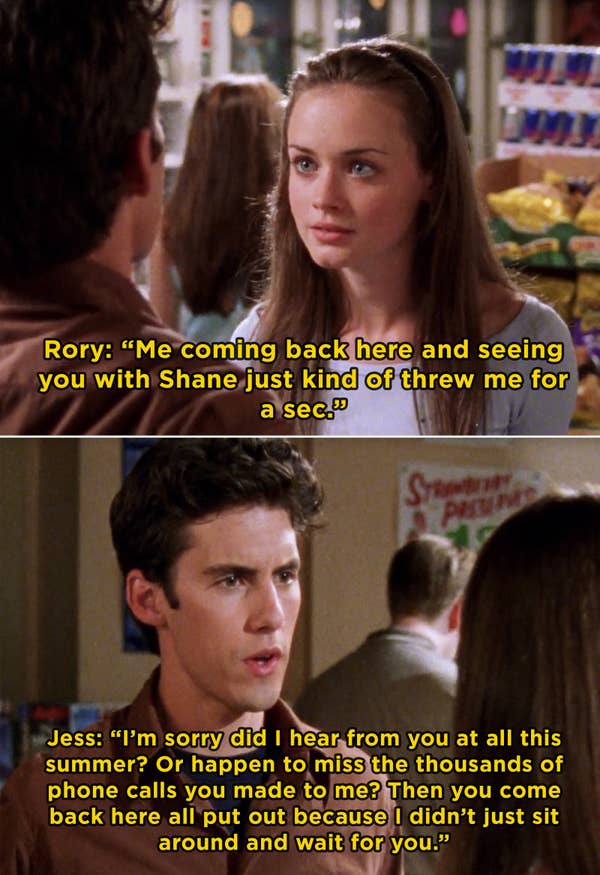 “Originally, I thought they were so cute together. Now I realize how much of a jerk he really was, like when he was with Shane just to annoy Rory. I’m officially Team Logan.”

22. Jane and Rafael from Jane the Virgin 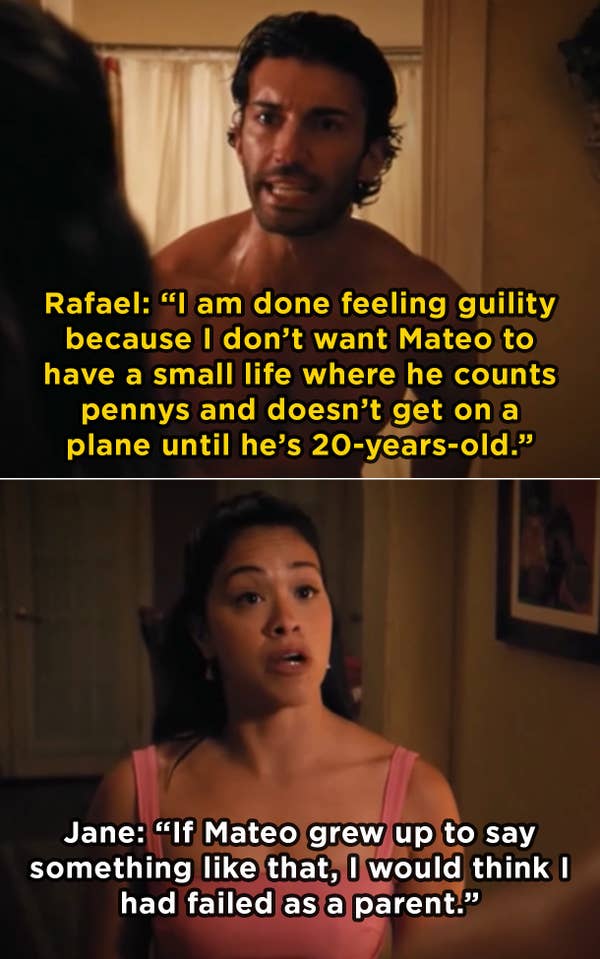 “I loved them before and thought that Michael ruined everything, but watching the show now I realize that Rafael never really respected Jane’s choices. Michael supported Jane, even when he didn’t agree with her. He always supported her opinions.”

23. Izzy and Alex from Grey’s Anatomy 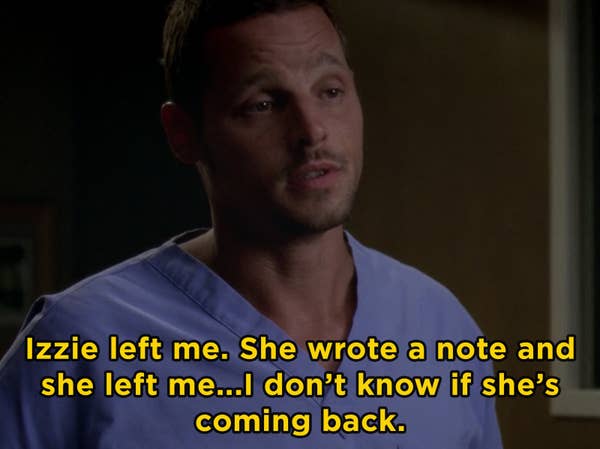 “At first, I thought they were meant for each other and when they broke up I was devastated. Now rewatching the show, I realize Izzy treated Alex horribly and he was way better off without her.”

24. Rumple and Belle from Once Upon a Time 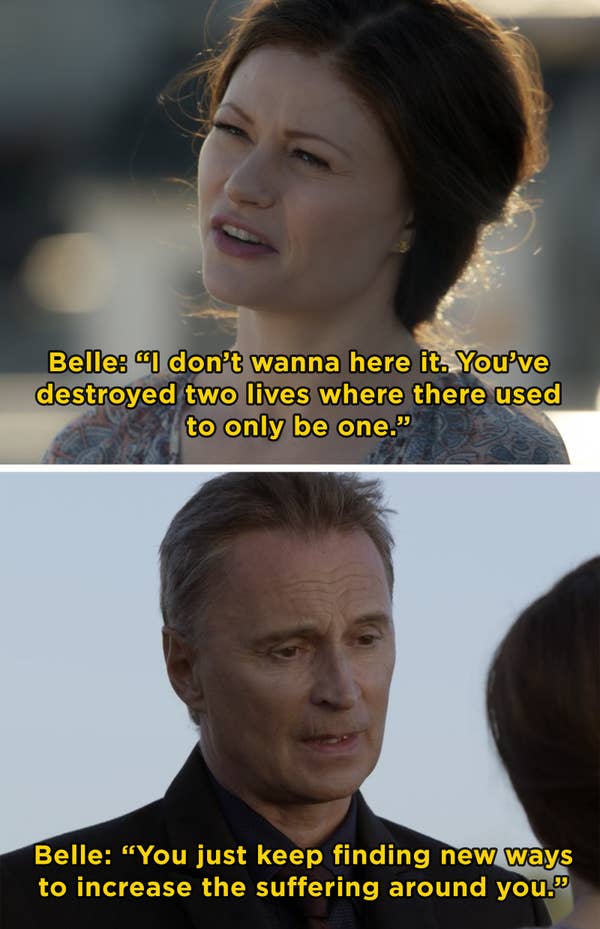 “I thought they were so cute, especially when they could see past their differences for each other. But then I realized that Belle was way too good for Rumple. He could never do what she needed, all she wanted was for him to stop being a killer and creep, but he loved power too much.”

25. Izzie and Denny from Grey’s Anatomy 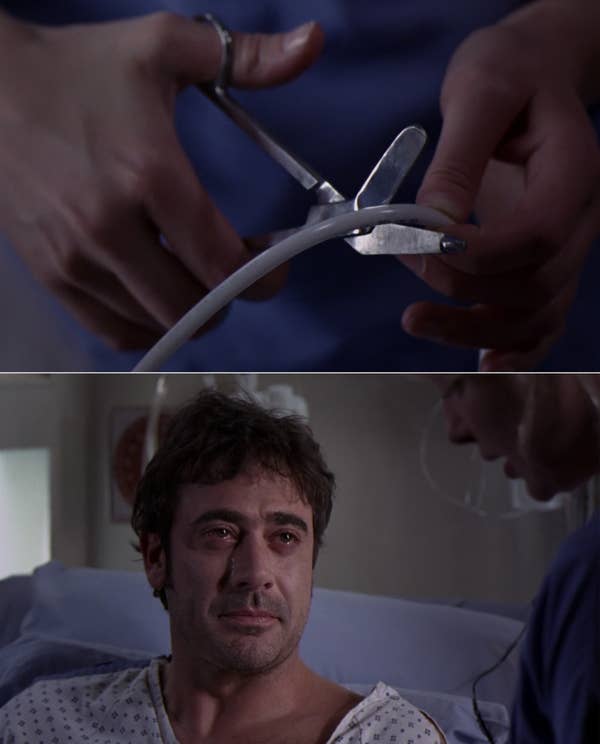 “When I first watched their story arc I was so heartbroken, but after watching it again, their situation made me cringe! They barely knew each other before Izzie starts cutting LVAD wires and stealing other people’s heart transplants, and Denny basically knew he was going to die. And then, all the Denny ghost hallucinations were obnoxious.” 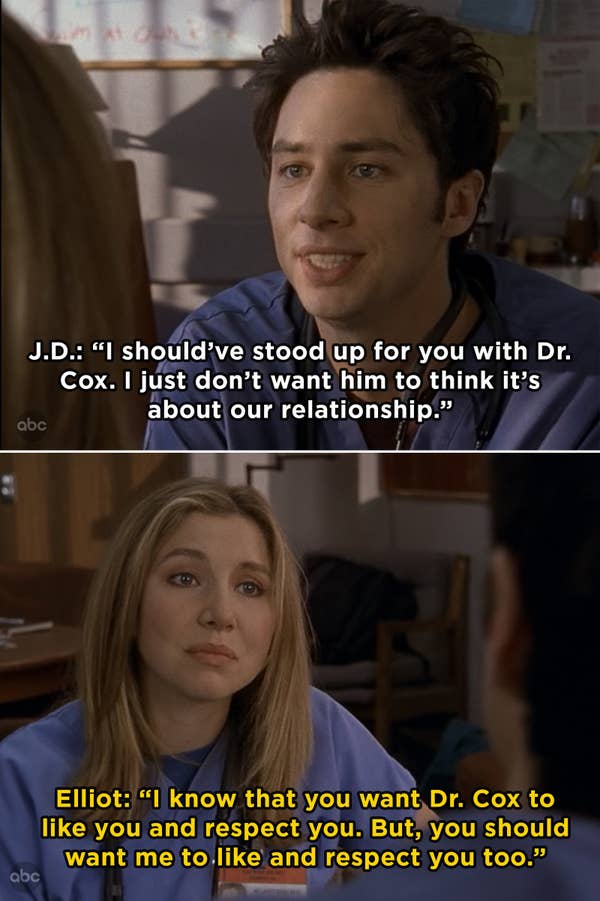 “I loved them in the beginning, but then they kept going back and forth about whether they wanted to be together or not. J.D. couldn’t fathom the thought of Elliot being with anyone but him, but he didn’t want her either.”

27. Veronica and Logan from Veronica Mars

“I initially liked them and enjoyed watching them gain a respect for each other and fall in love. But, somewhere along the way I got so tired of them constantly breaking up and getting back together. Veronica didn’t need to ‘end up’ with anyone.”

28. Oliver and Felicity from Arrow 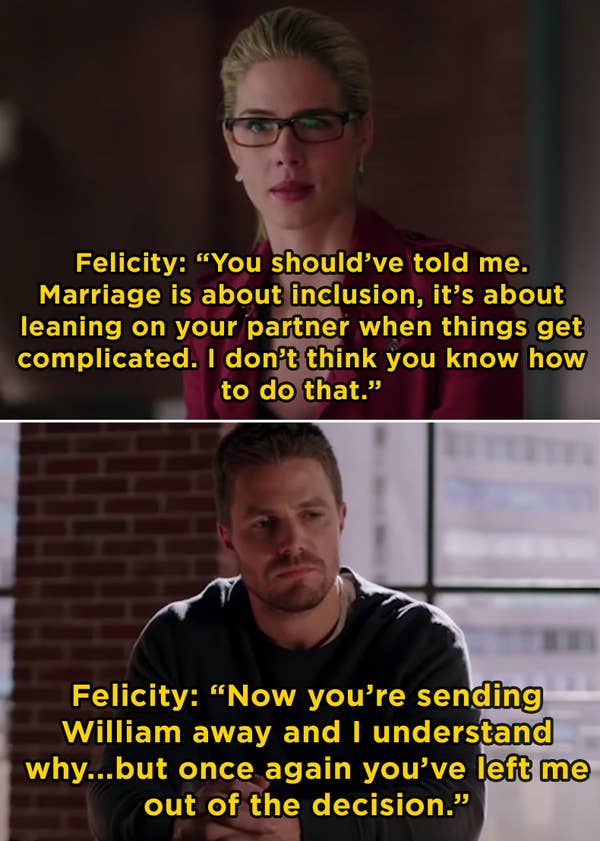 “I loved them together so much when the show first started. But then the show kept breaking them up and bringing them back together over and over again. I got so tired that I stopped caring about what happened to either of them and gave up on the show completely.”

29. Joey and Dawson from Dawson’s Creek 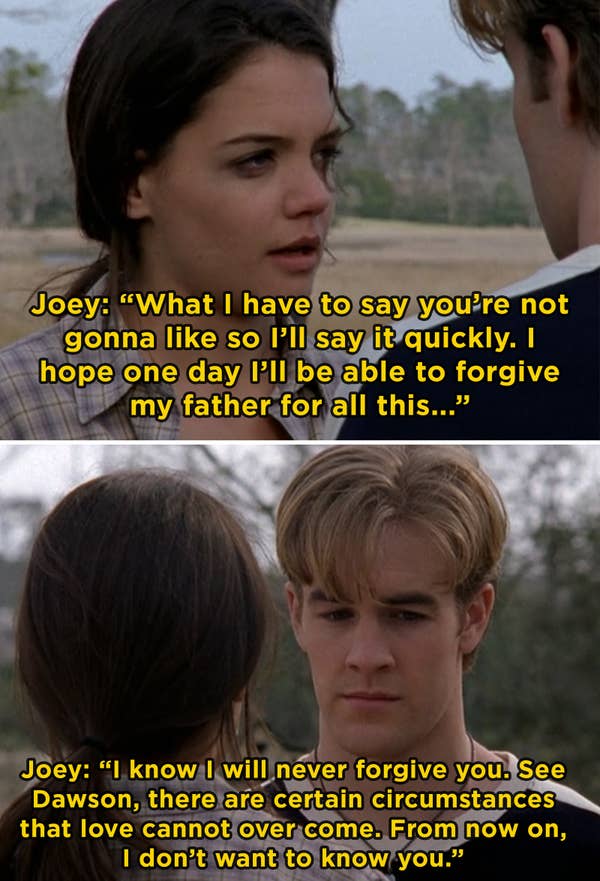 “Originally I was Team Dawson and Joey; but after rewatching the show I can finally admit that Dawson and Joey were not meant to be romantic partners. Joey belonged with Pacey Witter. End of discussion.”