We recently asked members of the BuzzFeed Community to tell us which piece of Harry Potter movie trivia totally blew their minds. Here’s what they had to say…

1. Tom Felton would sneak sweets and snacks on to set in the pockets of his robes, and when he was found out they were sewn shut.

“The rumour was that they sewed them up after the third film because I was sneaking food and drink on to set,” he said at a fan convention in 2014. “I want to clear this up because that is absolutely true.”

2. Before Richard Harris died, he told director Christopher Columbus that if he was recast, he would kill him.

“He did threaten to kill me if I recast him – I can’t even repeat what he said to me,” Columbus revealed just before Harris’s death was announced.

3. The train used to film scenes featuring the Hogwarts Express was vandalised between filming of Chamber of Secrets and Prisoner of Azkaban.

The vandals caused up to £3,000 worth of damage when they attacked the train’s carriages with green and silver spray paint overnight.

4. Malfoy’s “I didn’t know you could read” line was improvised by director Chris Columbus. Tom Felton said it was one of his favourite moments from the series. 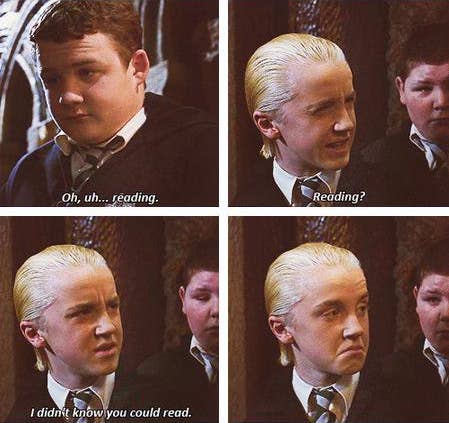 Many people believe Tom improvised the line because he forgot what he was actually supposed to say, but that isn’t the case.

5. The door to the Chamber of Secrets isn’t CGI: It’s all mechanical, and still works to this day. – brandies

You can see a video of the door working its magic at the Warner Bros. Studio Tour in London here. Unfortunately, it doesn’t move for just any visitor – its mechanics are delicate, so seeing it move is a rarity.

6. Harry’s wand changes between the second and third movies.

According to Pottermore, the wand’s design “evolved over the course of the films”. Before filming started on Prisoner of Azkaban, director Alfonso Cuarón offered the actors a selection of new wands to choose from. Daniel Radcliffe chose Harry’s famous tree trunk-esque, whittled wand, which art director Hattie Storey called “more mysterious and magical”.

7. And Daniel Radcliffe went through around 80 wands during filming, because he kept wearing them out.

On average, the prop team had to make six wands for each character, but ended up making around 80 for Dan, because he would use them to drum on various surfaces and fiddled with them so the paint came off. In fairness, he felt quite bad when he found out.

8. J.K. Rowling was offered the part of Lily Potter in the first movie’s flashback scenes, but turned it down.

She said no to the role because she’s “really not cut out to be an actress, even one who just has to stand there and wave”.

9. The puppets used to create the Dementors were filmed underwater and then animated to produce the eerie floating effect you see in the movies.

The filmmakers originally wanted the Dementors to be a practical effect (aka, not computer animated), but they realised that it would be impossible to control the Dementors’ motion underwater. They used footage of the underwater tests as a reference for the CGI animated Dementors we see in the films.

10. Emma Watson had an on-set hamster during the filming of the first movie, but it died, so the props department made a tiny hamster-sized coffin to bury it.

The coffin was mahogany and lined with velvet, and that hamster is probably really popular in hamster heaven.

11. Ralph Fiennes originally wore tights under his Voldemort robes, but the gusset would slip down and make it difficult to walk, so in the end he wore stockings and garters.

“If the stunt team ever got too macho I would tease them with my inner thigh,” he said at a panel event in 2011.

12. Harry doesn’t cast a single spell for the duration of the first movie.

He performs wandless magic, like when he vanishes the glass at the zoo, and some kind of magic-y things happen when he’s holding a wand, like at Ollivander’s, but he never actually successfully casts a spell by saying the incantation out loud.

13. The actress who played Moaning Myrtle was actually 36 years old at the time of filming Chamber of Secrets.

“She’s a multifaceted character; lots of mood swings and simmering emotions,” Shirley Henderson, who plays Myrtle, told the Telegraph. “Maybe that’s why they chose an adult rather than an actual 14-year-old.”

14. The actor who plays young Voldemort in Half-Blood Prince – Hero Fiennes-Tiffin – is the nephew of Ralph Fiennes, who plays the older Voldemort.

But it wasn’t his family connections that got him the part, according to director David Yates.

“I came up in these terrible spots after about a week,” he said in a conversation with J.K. Rowling. “Eventually we realised that I was actually allergic to the Harry Potter glasses, because I had these two rings of whiteheads around my eyes.”

16. Katie Leung, who played Cho Chang, listened to Coldplay in her dressing room so it was easier to start crying in scenes.

17. Dolores Umbridge’s outfits are a light pink at the beginning of Order of the Phoenix, but get darker and brighter as the movies go on, because she’s getting “more hysterical”.

18. Dame Maggie Smith was fighting breast cancer during the filming of Half-Blood Prince. 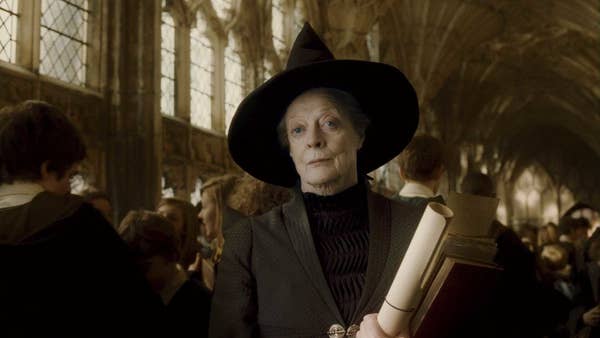 Although she was going through chemotherapy at the time, she refused to let it stop her from playing Professor McGonagall.

19. Emma Watson texted Helena Bonham-Carter with tips to prepare for the scene where Hermione transforms into Bellatrix to infiltrate Gringotts.

“It’s a really interesting way of working, because you suddenly become aware of your mannerisms, which I’m not really aware of,” Emma said of helping Helena prepare for the role. “Watching Helena do me was bizarre. She’s uncanny.”

20. It took 95 takes to film one shot of the seven Potters at the beginning of Deathly Hallows Part 1. 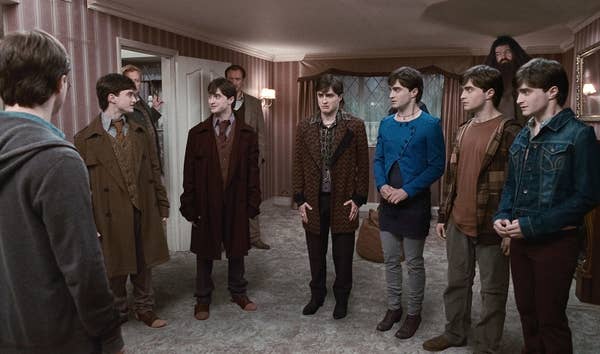 While it took Daniel Radcliffe around 12 takes to get each character’s mannerisms just right, he acted Hermione perfectly on his first try.

“When they were there actually filming that kiss, they did actually want me there to kind of play off something, but I just found that too funny. Emma sent me out because I kept laughing. It just looked really strange,” Rupert said.

22. When the movies ended, Daniel Radcliffe took Harry’s first and last pairs of glasses, Rupert Grint took the Deluminator and the number 4 from the house in Privet Drive, and Emma Watson took a wand, a cloak, and the Time Turner.

Rupert has also revealed that he tried to take a golden Triwizard egg from the set of the fourth movie, but was caught and had to give it back.