In the books, Luna wears dirigible plum earrings, so Evanna Lynch showed up to the audition with a pair she’d made herself. They were so good she ended up wearing them for the film as well!

2. Tom Felton stole so much food that they had to sew his pockets shut.

At the Calgary Comic and Entertainment Expo, Felton admitted it. “The robes had these huge pockets. The rumor was that they sewed them up after the third film because I was sneaking food and drink onto set. I want to clear this up because that is absolutely true.” A pretty Malfoy thing to do, no?

3. When the director of Prisoner of Azkaban asked the three main actors to write essays on their characters, Emma wrote 16 pages while Rupert didn’t do it at all.

The director of the third film, Alfonso Cuarón, asked Rupert, Emma, and Daniel to write essays on their characters. Emma turned in 16 pages on Hermione, Daniel turned in what he felt was a very strong page on Harry, and Rupert didn’t do it at all. His excuse? Ron wouldn’t have.

4. Tom Felton lied about having read Harry Potter at his audition.

This is so in character I can’t even.

5. Rupert Grint is terrified of spiders in real life.

This definitely gave the Aragog scene a dash of realism.

Oldman and Radcliffe bonded over their love of music, and Oldman even apparently bought Dan a bass guitar. This is especially in character because Sirius sent Harry a firebolt as a gift in the films!

7. Emma Watson is incredibly smart and even attended Brown University while filming the movies.

You probably already knew this one, but still!

8. Which meant Emma spent less time on set and had multiple body doubles.

Or MAYBE Emma was just using a time turner.

9. James and Oliver Phelps, who played the Weasley twins, would play pranks on set.

One of the worst pranks they did involved convincing Rupert’s stunt double he was going to be fired for partying too late. They also loved to prank each other, like when Oliver bid on an item in James’ name at a charity auction and forced him to pay for it, then gave it to him as a “gift.”

10. Rupert was doodling an unflattering drawing of Alan Rickman while filming a scene in Potions when he realized Rickman was standing right behind him. 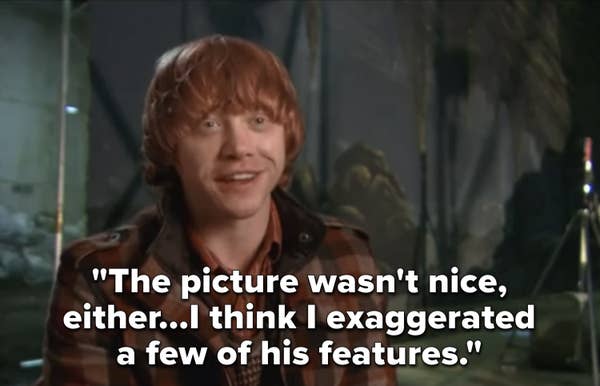 Rickman actually made him sign it and kept the drawing for years, saying he was “very fond of it.” That part’s not very in character, but Rupert’s actions definitely were.

11. Alan Rickman came up with the idea to embarrass Daniel Radcliffe by putting a remote-controlled fart machine in his sleeping bag during a scene where he was lying next to his crush. 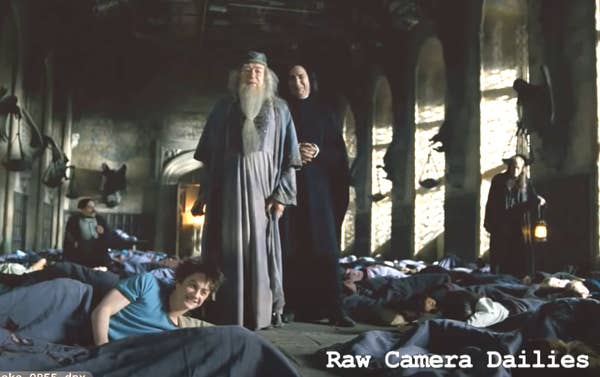 Michael Gambon and director Alfonso Cuarón were also in on the joke. In the video, you can see Rickman laughing hysterically as Gambon struggles to remain in character. I don’t think Snape would’ve been this fun, but he definitely would’ve jumped at an opportunity to embarrass Harry.

12. Maggie Smith, who played McGonagall, was in the middle of cancer treatment while filming the sixth movie.

Just like McGonagall, Smith is a true badass who powers through tough times for her job.

13. Rupert Grint had a crush on Emma Watson while filming.

So did Daniel Radcliffe.

14. Emma Watson was too embarrassed to hug both Rupert and Dan in the second film, so director Chris Columbus had her just hug Dan, then get too uncomfortable to hug Rupert.

This was actually super in character, as Hermione and Harry were only ever friends, and Hermione and Ron had a slow burn relationship. It makes sense that she’d be more shy with Ron!

15. Rickman was an expert at stealing stuff from set.

But when Jason Isaacs (Lucius Malfoy) tried to take just a newspaper home with him, he was caught and embarrassed in front of a friend he’d taken to set. That doesn’t surprise me – Snape got away with a lot of stuff others couldn’t have.

16. Daniel Radcliffe saw that Richard Harris (the original Dumbledore) was having trouble remembering his lines, so he pretended he needed practice and asked him to run lines.

One thing people don’t talk about with Harry is that he was so polite, especially in the first two books and films.

17. Rupert Grint rapped at his audition. 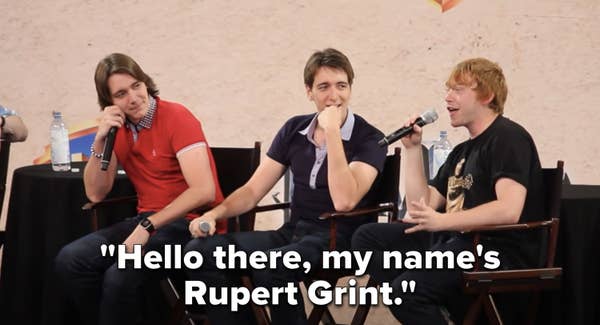 He tried to recite it years later (seen above): “Hello there my name’s Rupert Grint, I hope you like this and don’t think I stink. I’m 4’9″ and age 11.” I don’t know why, but I could DEFINITELY see a young Ron trying to rap.

18. When Rickman found out a child with cancer visiting set was denied his request to be in the film, he went into “Snape Mode” and demanded to know why.

Rickman even brought him into the shot, though the scene was later cut.

19. And finally, Alan Rickman knew that Snape loved Lily, and often argued with directors over their directions on how to portray Snape. He ended up frustrated with director David Yates, who he felt cared more about teen audience appeal.

This is especially in character as Snape was often unhappy with his role as a double agent, and voiced this to Dumbledore.