Some are simple, others very complex, but all of these Harry Potter alternative theories are plainly and bizarrely possible. From Ron being Dumbledore, to muggles winning a war against wizards, many Potterheads have come up with their own theories about the series, and we’d like to share them with you so you can make up your own mind.

1.The Ronbledore theory: Ron was actually a time-traveling Dumbledore. 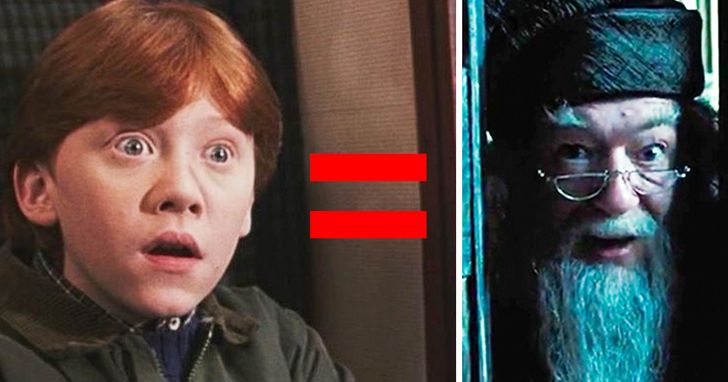 This theory states that Ron lived his “first life” as the book suggests: He goes to Hogwarts with Harry and Hermione, and ends up marrying her. However, at some point later in his life, he’s sent back in time to live a “second life” as Albus Dumbledore. This way, he would be able to become Harry’s mentor once all the problems and adventures from the series started. Here are the arguments:
They look alike, in fact, Ron is and Dumbledore was, red-headed, both have long noses, and the 2 are tall and thin. 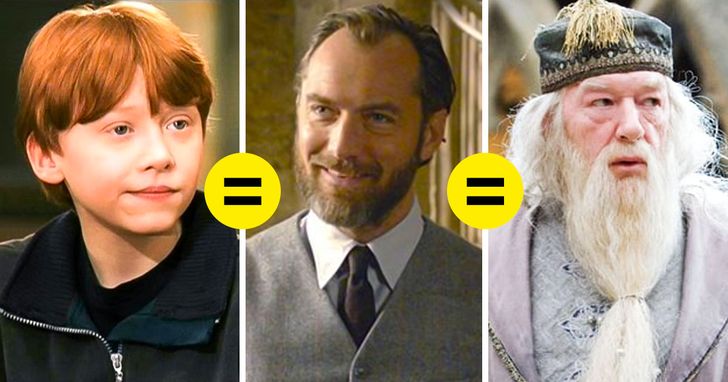 Dumbledore confessed that when he was young he started to dislike Bertie Bott’s Every Flavor Beans after eating a vomit flavored one. But there’s a timeline problem here: Dumbledore is around 150, because wizards live way longer than muggles, but Bertie Bott was founded in 1935. He would have had to be born after 1935 and not in the middle of the 1800s, as he appears, to have tried a vomit favored bean in his youth. 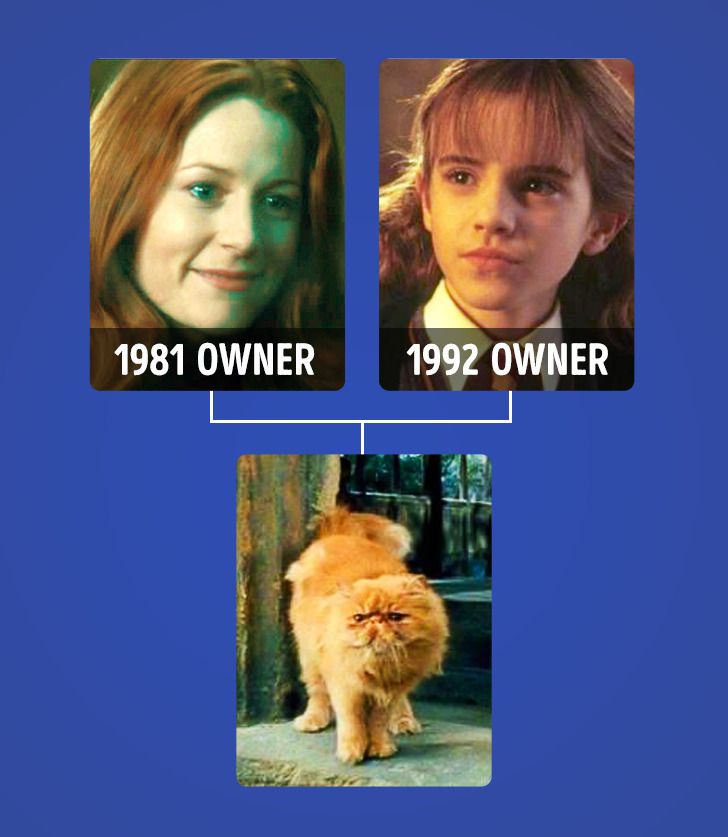 When the 3 friends are in Grimmauld Place, Harry finds a letter written by Lily, his mom. There she mentions that the Potter family owned a cat and that baby Harry almost stepped on it while he was playing with his toy broomstick. No one knows if the kitty came out alive after Voldemort’s attack, but many are sure that Crookshanks is that same cat. Here’s proof: 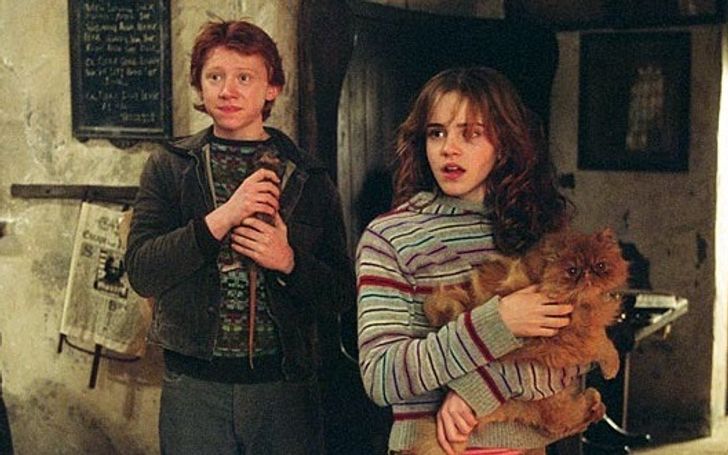 Hermione purchases Crookshanks in The Prisoner of Azkaban, at a place in Diagon Alley called Magical Menagerie. The store owner says that he has had the kitten for “quite some time” because no one wanted him. According to our timeline, from the attack to the day Hermione bought the cat, 12 years had passed, and that definitely qualifies as “quite some time.” 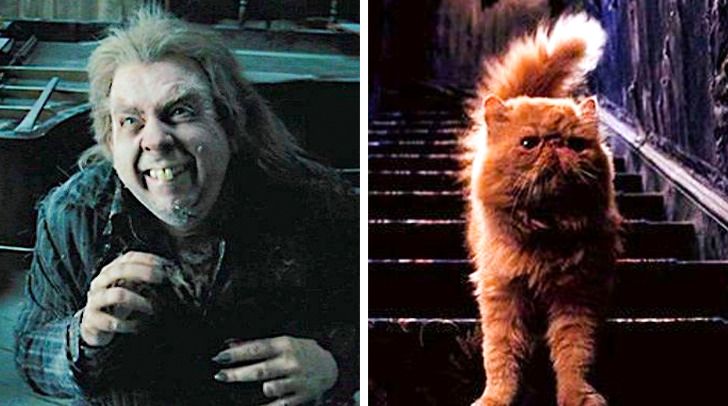 Crookshanks recognizes Scabbers and despises him immediately. Peter Pettigrew was also an old friend of James and Lily, but he was the one who betrayed them. The cat may not know what betrayal is, but he sure recognized him as being next to Voldemort the night of the attack and saw him turn into a rat after his owners lost their lives. 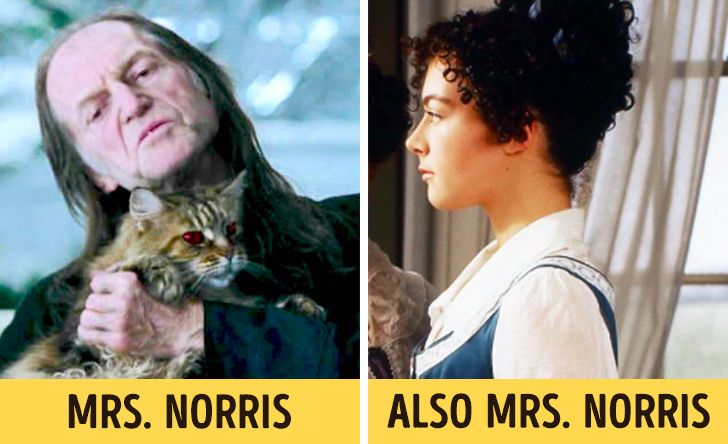 Argus Filch appears as a lonesome, grumpy, and rancorous man, but he certainly doesn’t behave like that toward his cat, Mrs. Norris. Because of the following compelling evidence, many have started to believe that the cat was not exactly his pet, but his wife, an Animagus that stayed as a cat after a transformation went wrong. 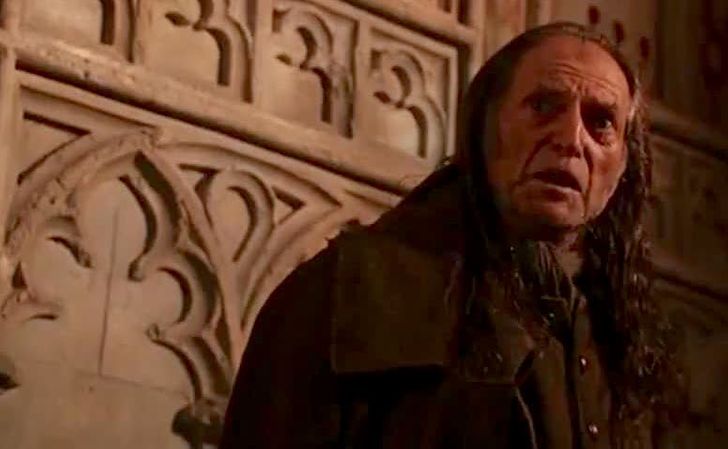 When the Basilisk petrifies her cat, Filch loses his mind. He accuses Harry of murder and starts sobbing. It’s hard to imagine that such a cold and bitter individual could react by crying over the death of a cat, even it was his pet. It made it look as if Mrs. Norris was more to him than just an animal companion. There’s no mention of Hedwig, for example, or Neville’s toad. However, the map doesn’t have the same treatment with Animagi, and the first time Harry opens the map, J.K. Rowling describes what it shows:
“A labeled dot in the top left corner showed that Professor Dumbledore was pacing in his study; the caretaker’s cat, Mrs. Norris, was prowling the second floor.”

4. It was Harry’s fault that the Dursleys were so mean to him. 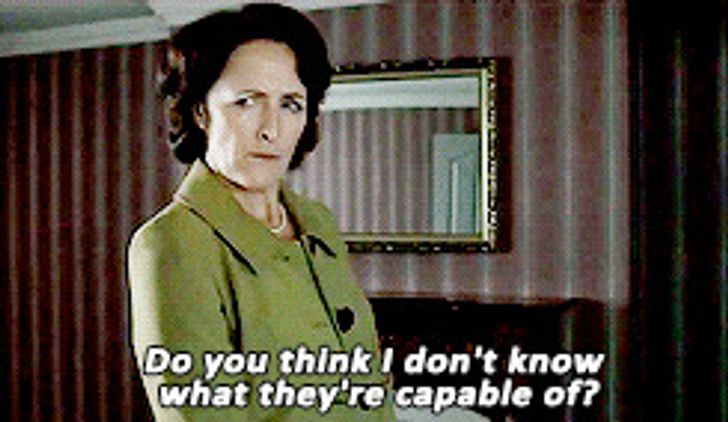 This theory states that the Dursleys treated Harry so terribly because they were exposed to the same sinister influence of the Horcrux that Harry was. Here are some thoughts to consider:
A Horcrux may be the darkest magic artifact, only achievable by murdering someone. It’s the sort of magic only sinister witches and wizards engage in. Whether they’re objects or people, the consequences they have on their surroundings, are the same: They make others hostile, intimidating, and even enable them to control others thoughts. 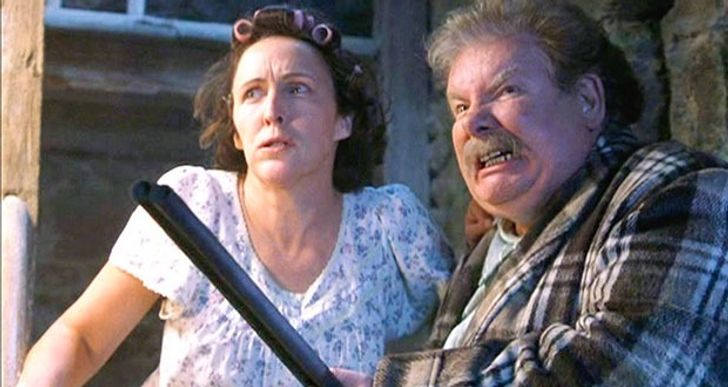 An example of this is Ron. Just remember how he abandoned Harry and Hermione in the woods after wearing the locket for only a few days. Harry was one of Voldemort’s 7 Horcruxes. If Ron left his friends after a few days, imagine how bitter and awful the Dursleys must’ve been after living more than a decade with a Horcrux.

5. We knew about Dumbledore’s death since the third book: Professor Trelawney predicted it. 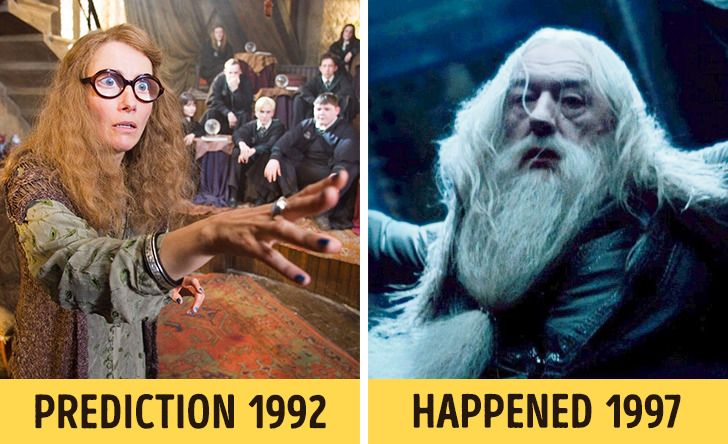 In The Prisoner of Azkaban, Professor Trelawney is hesitant about sitting down to enjoy a Christmas dinner with other students and professors because she saw 12 people seated at the table. She explained that when 13 people dine together, the first person to rise will be the first of them to die.
But there were already 13 people dining at the table. No one noticed Peter Pettigrew disguised as Scabbers the rat, hiding inside of Ron’s pocket. Albus Dumbledore was the first of them to rise to welcome Professor Trelawney, and he was the first of the party to die.

6. Hogwarts was, in reality, an insane asylum. 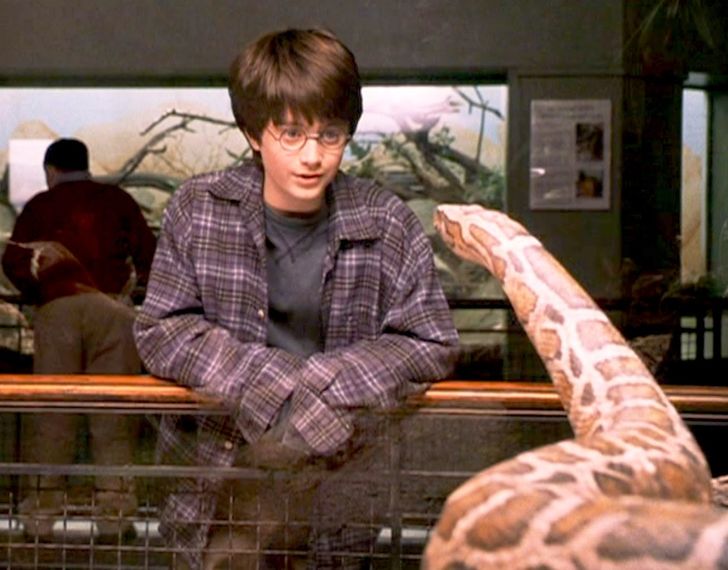 Some believe that the Harry Potter world is so supernatural, that the explanation for it is that it was all imagined by the characters. There were all sorts of imagined things like talking paintings, ghosts, and characters hearing voices or talking to animals. But, apart from all the magic, here are some clues on why Hogwarts may have been an insane asylum: 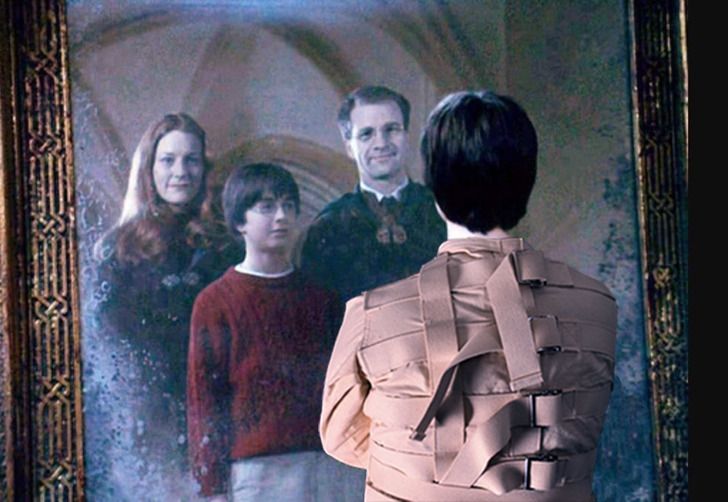 In The Philosopher’s Stone, Harry becomes obsessed with the Mirror of Erised and manages to sit in front of it while he’s eating every night. One of these nights, Dumbledore warns him that “men have wasted away before it, entranced by what they have seen, or been driven mad, not knowing if what it shows is real or even possible.” 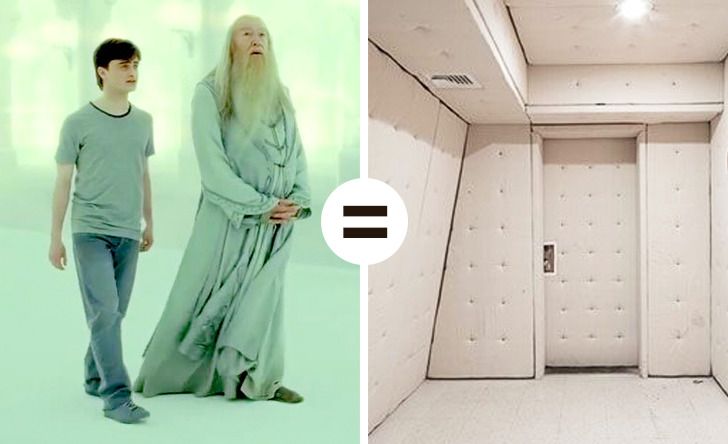 The moon has long been considered a symbol of lunacy. Lupin is a werewolf who undergoes his transformation every full moon. Harry is also very close to him, for which we can associate this pair with the moon and therefore, with insanity.

7. Wizards and muggles went to war in the middle ages and the muggles won. 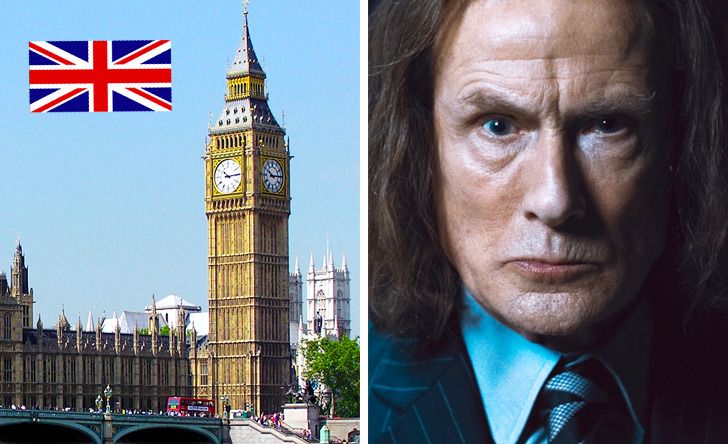 More than a few things inside the Wizarding World of Harry Potter don’t make much sense for some people, especially the way wizards and witches are regulated through the Ministry of Magic. This has led some fans to believe that around the 14th or 15th century, wizards and muggles went to war, where muggles were victorious. Therefore, they began to control and confine wizards through the Ministry of Magic. You may want to give some thought to these arguments: 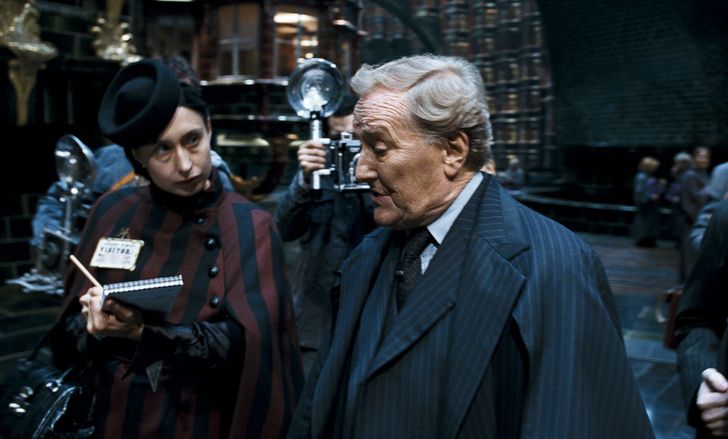 The name of the “Ministry of Magic” doesn’t convey the image of a whole government but it sounds like a branch of a larger governmental body, which would be that of the UK. Every head of state is called “president” or “prime minister,” not “minister of something.” Plus, no elections are mentioned in the books, nor are where this government and its authority come from.