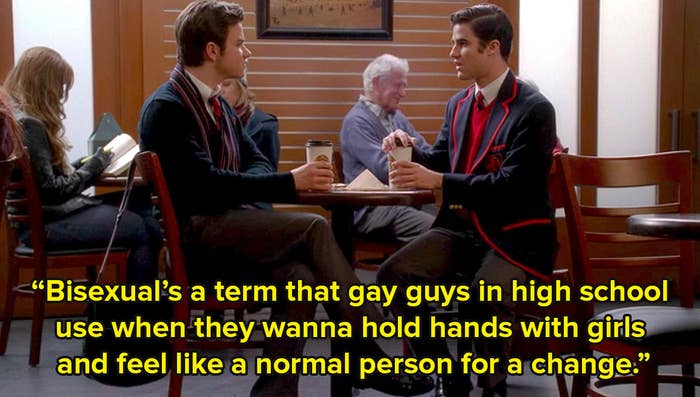 Glee was a revolutionary show for LGBTQ+ representation, but it still had some pretty biphobic moments that were never properly addressed. However, the show did end up earning some bi-points with its characterisation of Brittany S. Pierce, an openly bisexual cheerleader who has relationships with men and women throughout the show.

2. And that moment when the supposedly sex-positive protagonist of Sex and the City, Carrie, unfortunately seemed to hold the same view on bisexuals. 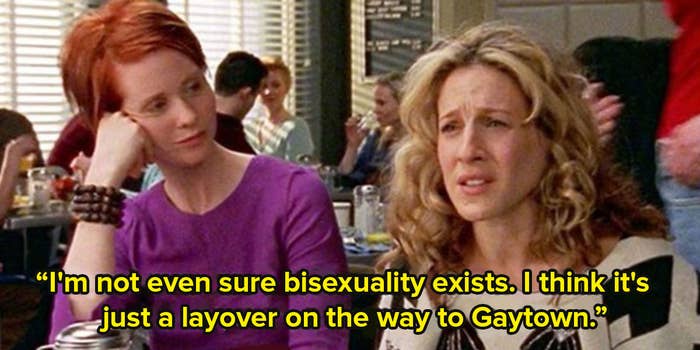 While some people do temporarily identify as bisexual before identifying as gay, that doesn’t mean bisexuality doesn’t exist. Do you know what actually doesn’t exist? A one-bedroom Manhattan apartment that Carrie could afford on a writer’s salary. Here’s the clip in full.

3. When Max begins transitioning on The L Word, and his hormone therapy turns him into a hyperaggressive, possessive jerk. 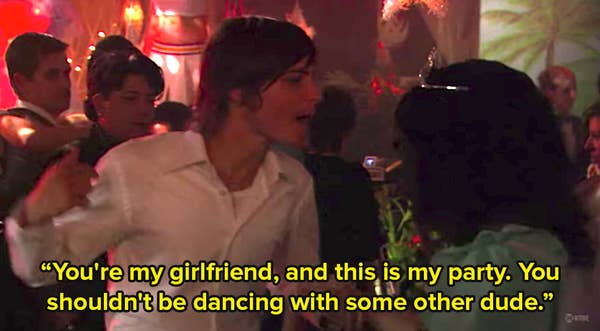 Max was a pioneering character for trans-masculine representation on screen, yet many transgender people believed the character failed to realistically portray the FTM experience, particularly during transitioning.

4. And when Max’s lesbian friends – who should’ve been supporting him – treated his choice to transition as a threat to the butch lesbian identity. 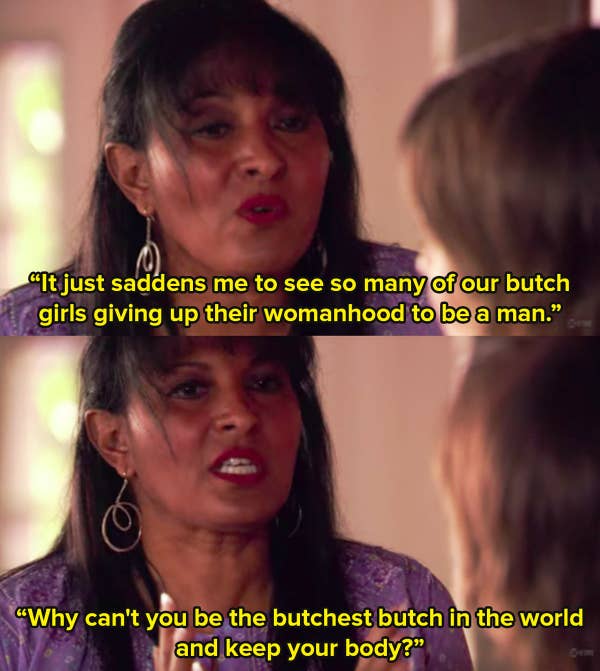 I don’t know who needs to hear this, but trans men are not butch lesbians who have lost their way! It’s sad that a groundbreaking show like The L-Word didn’t understand that, and instead chose to pit lesbians and trans people against each other. Luckily, The L-Word: Generation Q does a much better job with trans representation!

5. In Friends, when Ross assumed a male nanny had to be gay, simply because he was openly emotional and had a job in a female-dominated industry. 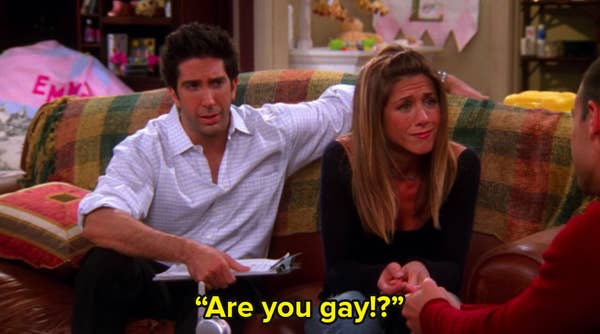 Let’s just say this episode did not age well. Ross becomes so uncomfortable with Sandy, the male nanny, for no other reason than his own anti-effeminate prejudice. It’s such a disappointing storyline as Sandy, who is perfectly lovely and super qualified, ends up being fired because of Ross’s feelings. It’s a real low point for Ross – and let’s face it, there are many!

6. Also in Friends, when Ross and Will admitted to spreading a rumour in high school that Rachel was intersex in an attempt to humiliate her. 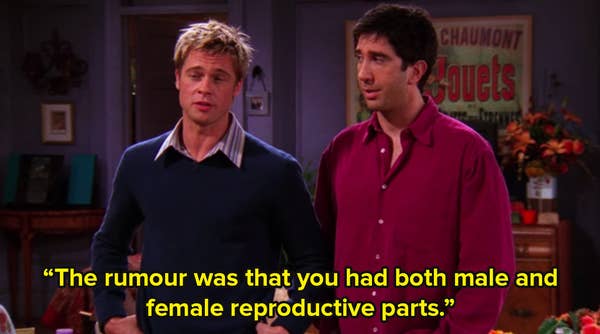 Friends portrayed intersex people as freaky and even repulsive, which is harmful and just not true. Being intersex is completely natural and actually pretty common – about one in a hundred people are intersex!

7. When Chandler’s dad was constantly mocked for her gender identity. 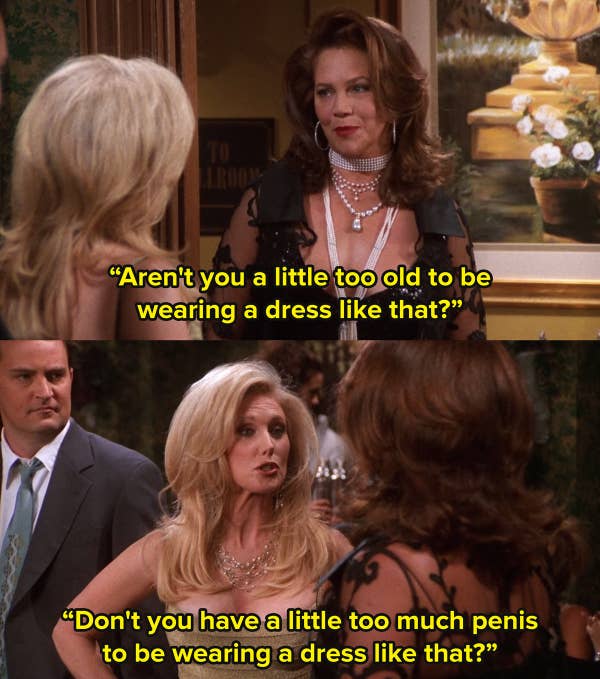 The show initially presents Chandler’s father as a man who does drag, but it seems more likely that she is a trans woman (who also does drag). Okay, we’re making assumptions a little here, but she’s probably ~not~ a cis man! Honestly, the only silver lining about the whole Chandler’s father debacle was her undeniably brilliant drag name – Helena Handbasket.

8. When How I Met Your Mother fetishized lesbianism to the point that Robin and Lily making out was the ONLY thing that could wake up Barney from a drunken stupor. 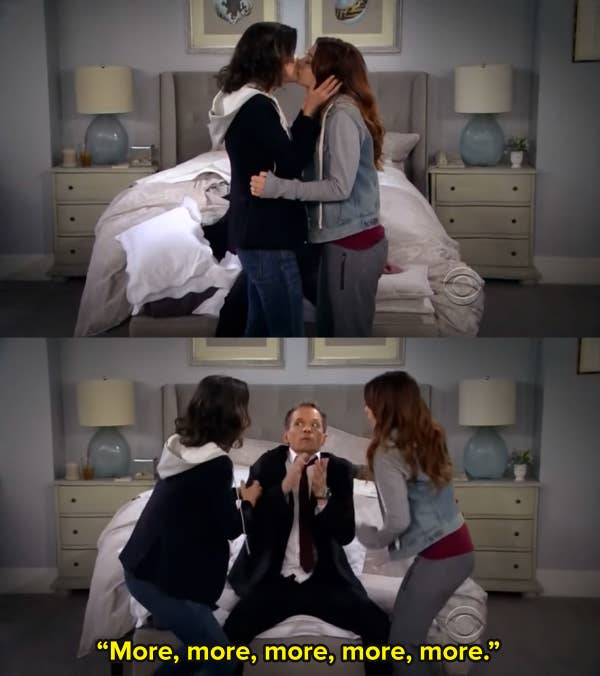 How I Met Your Mother frequently frames lesbianism as entertainment for straight men. It’s a lazy, homophobic trope that should’ve never gotten any air time! 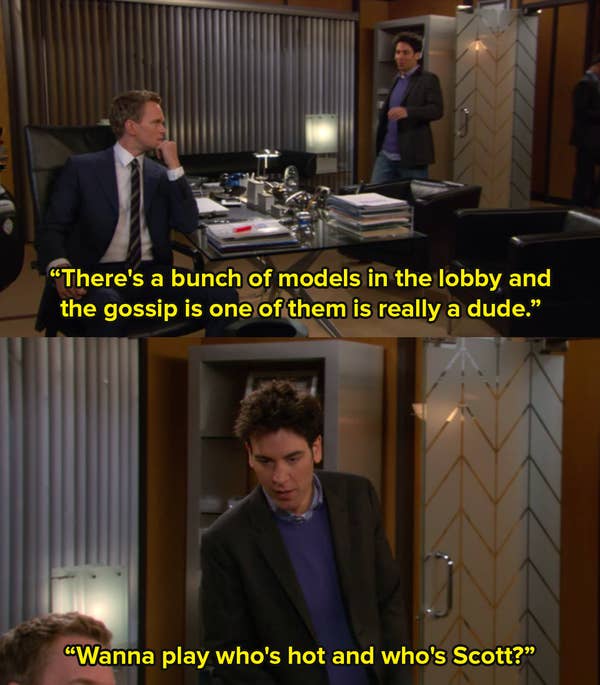 Not only does Ted claim that trans women are just “dudes,” but his idea of fun is trying clock trans people? No wonder it took nine seasons for Ted to find a girlfriend who could put up with him – he’s the worst.

10. That early episode of Bob’s Burgers, which features a group of trans sex workers who are referred to as transvestites and are all voiced by male comedians. 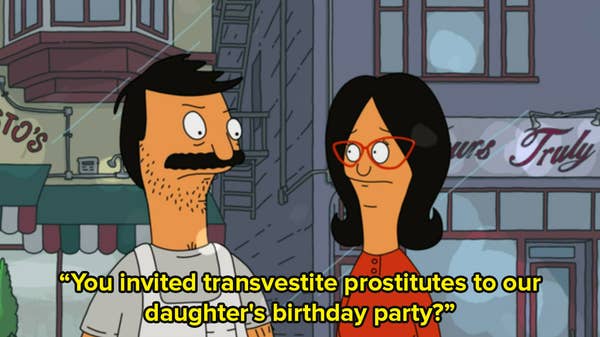 At first, it appears that the characters are cross-dressers, and one of the characters even identifies as a man. However, as the episode continues, the characters make references to transitioning, implying that they’re actually trans women. The writers clearly didn’t do any research on either community, but let’s be honest, if shows hired trans-identifying people more often, mistakes like this would probably be a thing of the past!

11. When Zach thought it was somehow gay to express his emotions and his friendship with other men in Gilmore Girls. 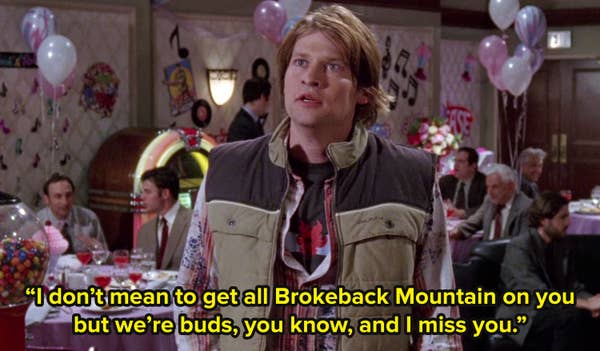 Gilmore Girls features a zillion of these kinda gags, and let me tell you – they get old real fast! Like, really, Brokeback Mountain?! How does “I miss you and you’re my friend” somehow equate to “I want you, anally speaking”?

12. And similarly, when Luke thought it was awfully gay for Kirk to be carrying his girlfriend’s handbag around Stars Hollow. 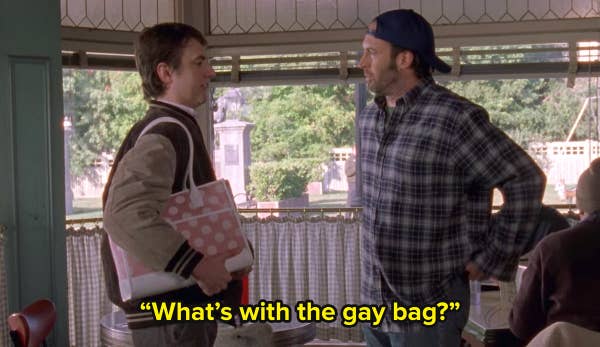 I know the hip thing in 2003 was to call things you disliked “gay” – thanks again Hilary for sorting that out – but as a longtime fan of the show, it’s always bothered me that the Gilmore Girls team kind of seemed to have it in for the gays.

13. When Douglas allowed a relationship with a trans woman called April to develop in The IT Crowd because he thought she was cis, but then he promptly broke it off after realising she wasn’t. 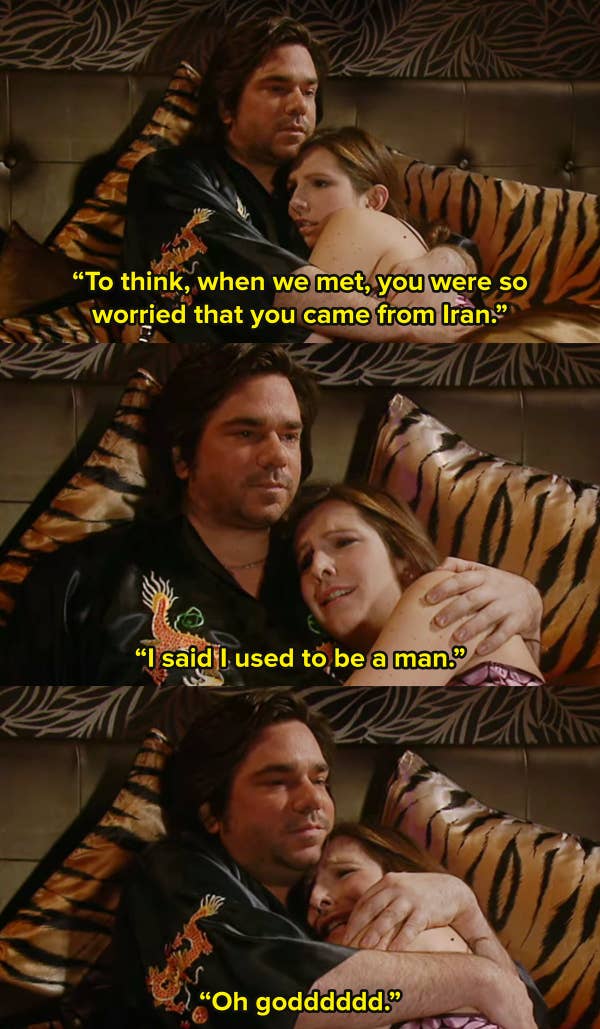 The (perhaps deliberate) irony of the storyline is that they were perfect together because they shared a lot of the same interests, which is itself inherently problematic because a) it seems to suggest that trans woman are still men somehow, and b) it is very gender essentialist. But let’s say that April does enjoy playing darts and drinking beer – Douglas letting her go because of a bigoted world-view was beyond stupid.