1. Monica appearing to change her mind about the existence of soulmates in a matter of weeks. 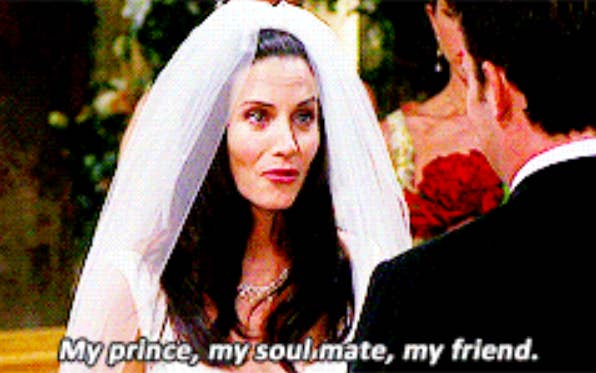 When Monica and Chandler get married, she calls him her “soulmate” in the vows. Then, just a couple of weeks later, Phoebe introduces Monica to a guy who Phoebe thinks is Monica’s soulmate. It causes Chandler to get all upset, so Monica then tells him she doesn’t believe in soulmates?!

2. Phoebe encountering her brother in season two, and it never being explained. 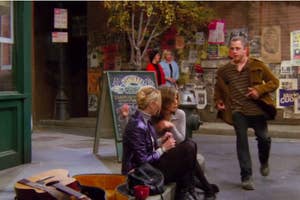 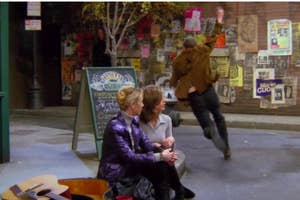 In season two, Phoebe’s brother walks past her busking in the street outside Central Perk. He throws a condom into her guitar case and later comes back to reclaim it, but it’s never mentioned when they meet as brother and sister. I always wonder if it was done on purpose, and if it was, why they didn’t somehow bring it up later?

3. Monica forgetting that Ross told her when he lost his virginity. 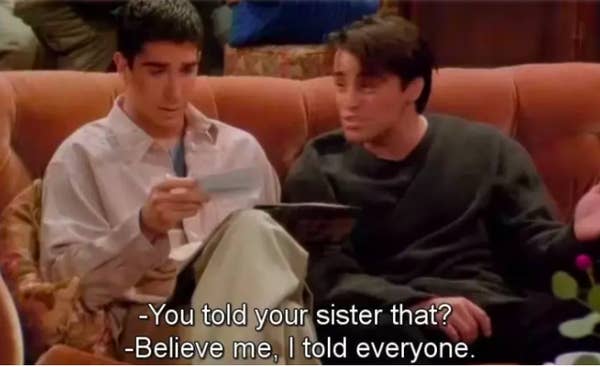 In one episode, Monica thinks she’s out with a brother and sister when they’re actually a couple. When the woman mentions how great her “brother” is in bed, Monica says: “My brother didn’t even tell me when he lost his virginity!” BUT, in the previous episode, Monica says “I hope you wouldn’t remember” when Ross realised the dates. We then find out it was the anniversary of the first time he slept with Carol – and actually the occasion he lost his virginity. It drives me CRAZY!!!!

4. Ross forgetting when he lost his virginity. 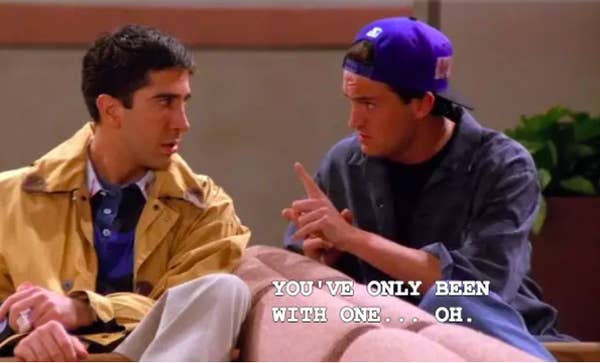 He makes this whole thing about how he lost his virginity to Carol, and yet in a much later season reveals he slept with a cleaning lady in college. So what’s the truth?!

5. Rachel being pregnant for over a year. 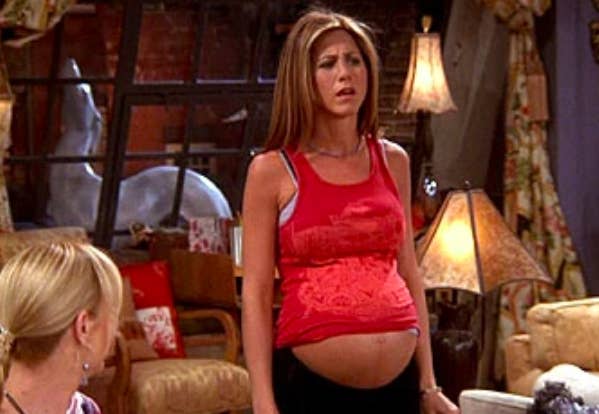 Chandler and Monica get married in May, and by that point, Rachel is already six weeks pregnant. But then Valentine’s Day rolls around and she’s still pregnant?!

6. David saying he lives in Minsk in Russia when Minsk isn’t in Russia. 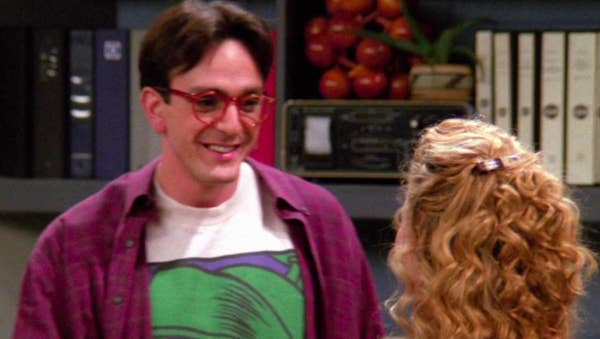 They continually say that David the scientist is living in Minsk, Russia, when Minsk is the capital of Belarus. Belarus was recognised as independent from Russia roughly three years before the airing of the first episode.

7. Monica time travelling on her date with Pete. 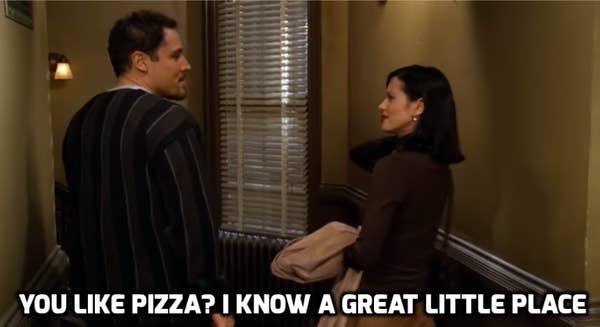 When Pete “the millionaire” takes Monica for their first date, they go to Rome for dinner. The way they lay out the episode means that basically no time passes between them leaving, “having dinner” and coming home. New York to Rome would be a nine hour flight one way! I know Pete is rich, but they must have rocketed there and back.

8. Monica and Chandler saying “I love you” for the “first time,” twice. 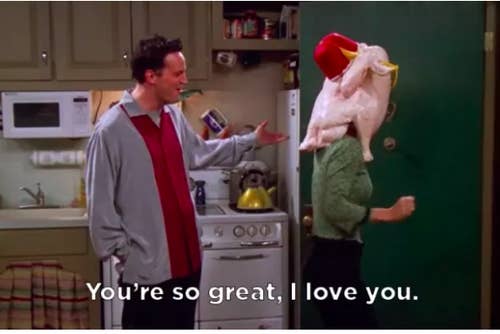 They say it once in a Thanksgiving episode and then again in an episode where Phoebe is trying to seduce Chandler to have him admit that he and Monica are together.

9. Rachel and Chandler meeting “for the first time” on three separate occasions.

There’s a whole joke about how Ross hates ice cream, but there are two scenes where he happily eats it – with his monkey, Marcel, and on a date with Elizabeth.

11. Chandler saying he can’t cry despite there being plenty of evidence to the contrary. 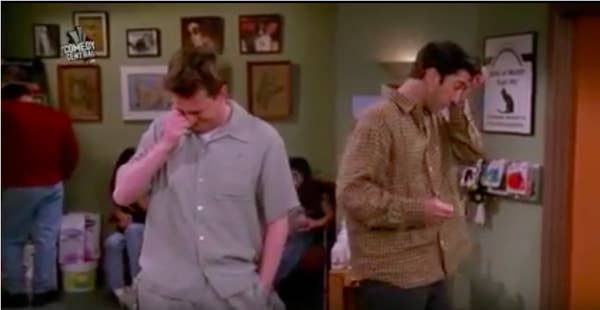 The episode “The One Where Chandler Can’t Cry” really annoys me. Before this episode, we’d seen loads of instances where he cries – like when he proposes to Monica, when Ross gives Phoebe the bike, and when Ross says he and Joey could both be best men. Sooo many examples of him crying!!!

12. Monica’s wedding gift going from wrapped to unwrapped to wrapped continually throughout this scene. 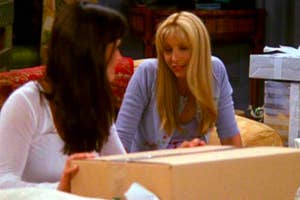 13. Mike’s Scarf going from tied to untied and back again throughout this scene. 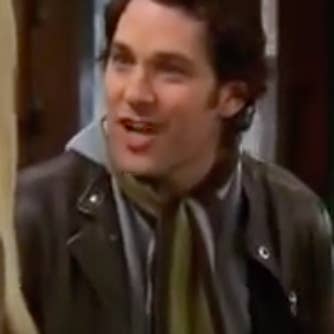 Every time they cut to Phoebe and then back to Mike, his scarf is different. It drives me crazy.

14. Joey’s shirt changing from purple to black in the same scene. 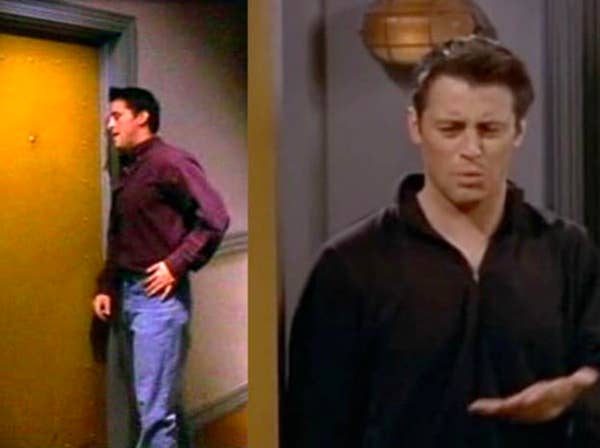 15. The numbers of their apartments changing.

Joey and Chandler’s door and Monica and Rachel’s door go from four and five to 19 and 20.