A while back, we asked the BuzzFeed Community to tell us their favorite behind-the-scenes Friends facts. Here are some of the best!

1. Ross and Rachel’s “break” was not supposed to happen.

Friends executive producer and director Kevin S. Bright said the “break” wasn’t planned to happen that way or that early, but they ended up doing it because “it allowed [them] to have fun with the show and give people something to root for.” Having Ross and Rachel get together so early, he said, kind of stole all the sexual tension from their relationship.

2. The Emily/Rachel wedding mix-up was inspired by David Schwimmer’s actual mix-up of their names in rehearsal.

In a rehearsal for a different episode, Schwimmer accidentally said, “Rachel, the taxi’s here” instead of “Emily, the taxi’s here.” Writer Greg Malins says this is the moment he came up with the Rachel/Emily name-switch idea.

3. Jennifer Aniston and Schwimmer actually had crushes on each other during filming, but one of them was always in a relationship, so nothing ever came of it. 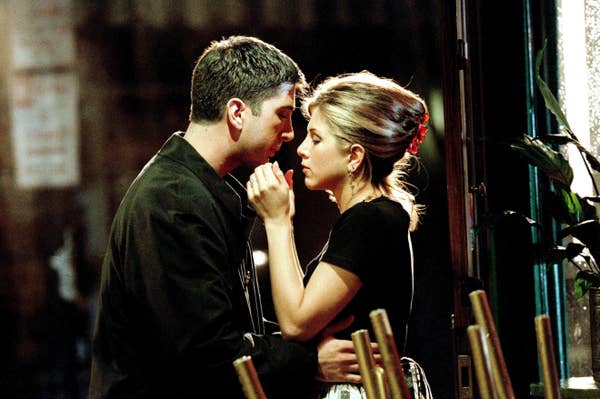 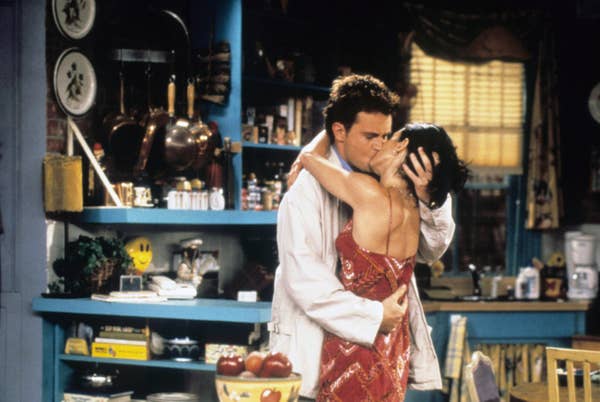 5. In Season 8, Ross wears a shirt with the ASL symbol for “friends.” 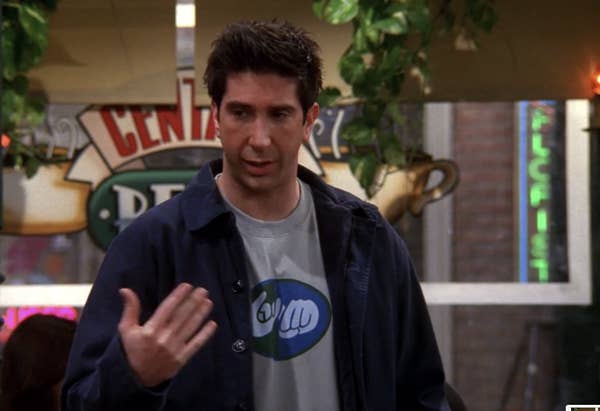 6. When Joey walks in wearing Chandler’s clothing, it’s really just cut-together pieces made to look as if they’re layered, all secured with Velcro at the back.

Costume designer Debra McGuire said, “What we did was take all these pieces from his iconic wardrobe and cut them so they were flapped and looked like they were layer upon layer upon layer .. We undid that costume from the back, so he went in through the back and his arms would go in, and it was Velcroed with a piece that went over the back so we couldn’t see the Velcro. It was quite an amazing construction job.”

7. Phoebe was supposed to end up with David, not Mike. 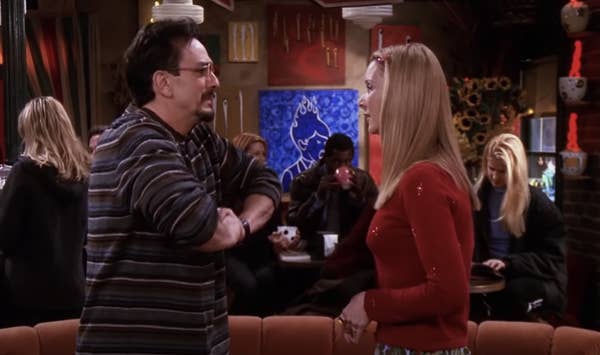 “Phoebe was originally supposed to end up with David the scientist, but the writers liked Paul Rudd’s Mike so much that they changed who she ended up with. And I think the world is better for it.”

8. Chandler and Joey’s dog statue actually belonged to Aniston. She was gifted it when she got the role of Rachel.

9. The cast of Friends went to Caesar’s Palace just before the show began airing as their last chance at anonymity. This is the same casino the characters visit in Season 5. 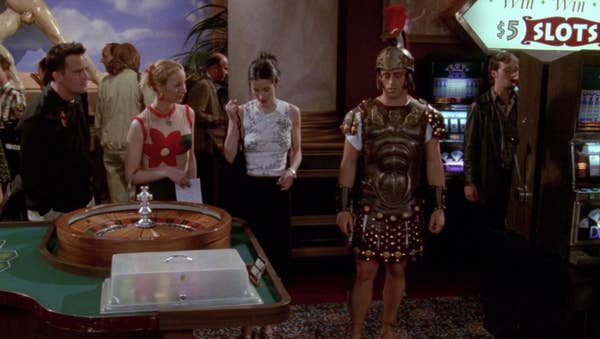 “Just before the first episode aired, they went to Caesar’s Palace for dinner and a night of gambling to have fun. The guy who directed the pilot (James Burrows) said it’d be their last chance at anonymity because they’d be famous afterward, so he took them all to Vegas. It’s the same casino where Joey gets a job and they all go to Vegas to get him.”

10. When Rachel undresses and sits in her lingerie on the couch waiting for Josh and then his parents come in, Joshua’s dad is actually played by Perry’s real-life father.

11. Although Joey is horrible at French, Matt LeBlanc is actually fluent.

“In ‘The One Where Joey Speaks French,’ [Joey] is not speaking French at all, but both LeBlanc and Lisa Kudrow speak French fluently!”

13. The scene where Phoebe sings along as Ross plays the bagpipes while the other characters try to hold in their laughter is actually a blooper that made it into the episode. 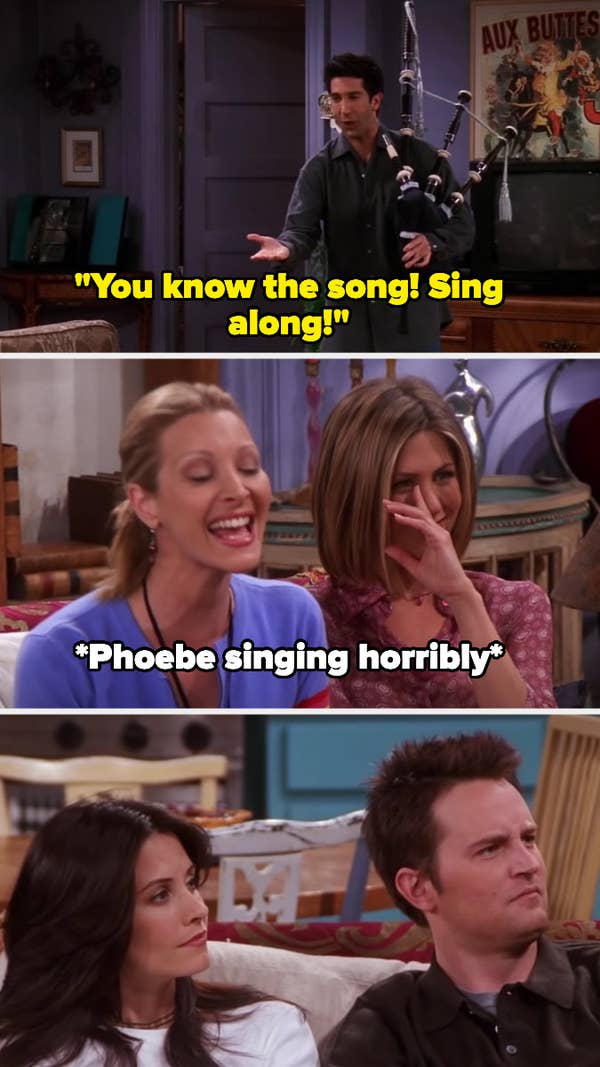 14. The fountain in the opening credits of Friends is actually the same one from Hocus Pocus.

15. The theme song was originally supposed to be “Shiny Happy People” by R.E.M. They ended up going with “I’ll Be There for You” by the Rembrandts, who only wrote a little snippet of it for the show — but it got so popular that they later recorded a whole version.

“The original theme song was supposed to be ‘Shiny Happy People’ by R.E.M. I don’t know why they went with ‘I’ll Be There for You’ instead, but that song was written specifically for the show by the Rembrandts.”

16. Monica and Chandler weren’t supposed to end up together. 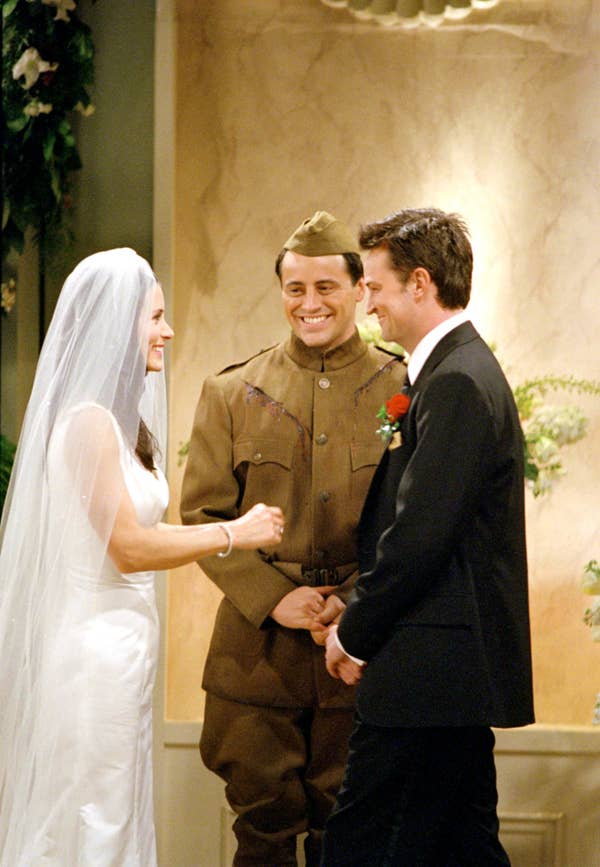 “Monica and Chandler weren’t supposed to end up married. They were originally only going to hook up in London, but the audience reaction was too much to be ignored.”

17. In fact, Joey and Monica were supposed to be the main couple of the show. 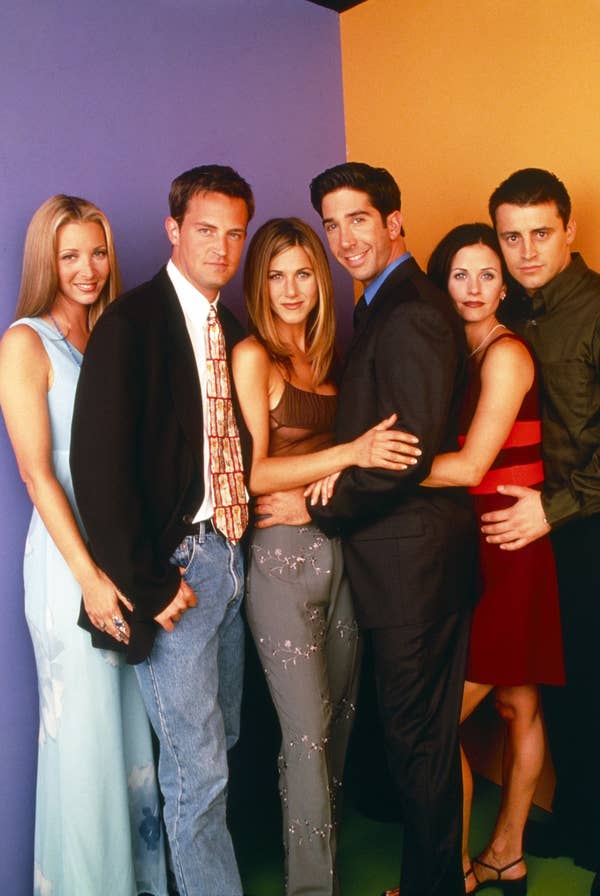 “Joey and Monica were supposed to be the main ‘Will they or won’t they?’ couple, but the strong chemistry between Ross and Rachel (who were never meant to go beyond the pilot) changed that, and they ended up being the show’s longest plot.”

18. Emily was often shown on the phone because the actor was pregnant. 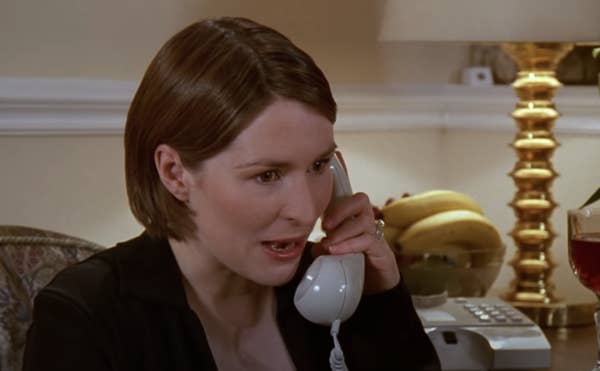 “Emily was always shown in bed talking to Ross long distance because she was visibly pregnant.”

19. She was also apparently written out earlier than intended because Helen Baxendale wanting to focus on raising her family. 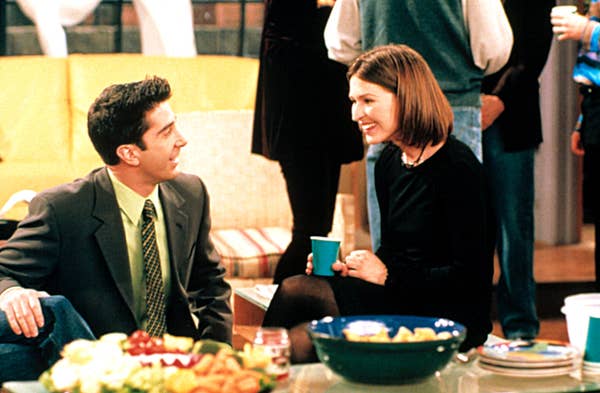 “Emily and Ross were supposed to stay together, but because Baxendale fell pregnant, the writers had them break up.”

20. The fridge in Monica and Rachel’s apartment was fully functioning.

“The fridge in Monica and Rachel’s apartment actually worked and held water bottles and other drinks for the cast and crew.”

21. Aniston was already starring on the CBS show Muddling Through and was going to have to leave Friends to honor her contract on the former show — so NBC allegedly actively tried to tank the series by airing unreleased Danielle Steel made-for-TV movies at the same time as Muddling Through, hoping to steal its audience. It worked. 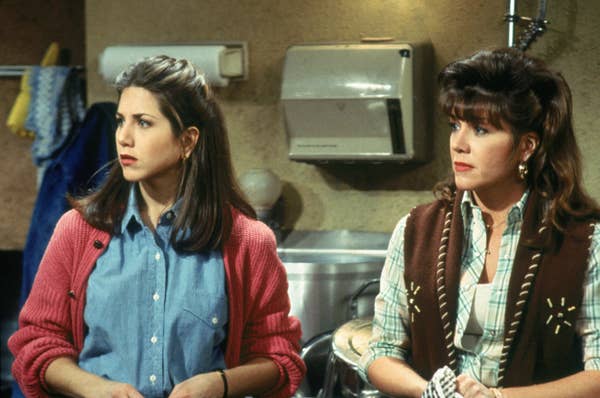 “Aniston had another show she was already starring in, so [the network] actively tanked that show’s first season so she could sign on to Friends.”

22. Aniston reportedly turned down a spot on Saturday Night Live just before Friends. 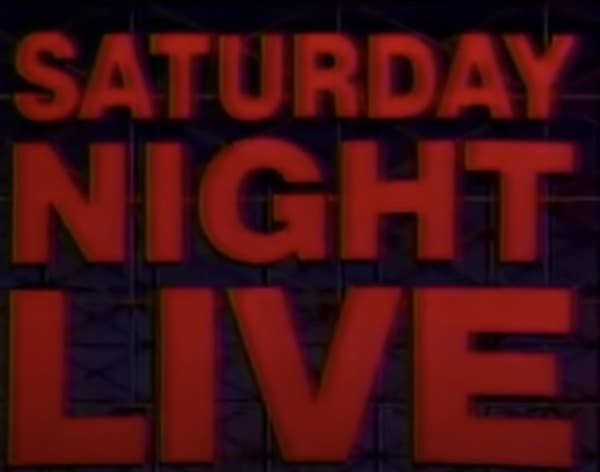 “Aniston was planning on becoming part of the SNL cast but reportedly declined the offer in 1990, leading to her eventual acceptance of the role of Rachel in 1994 for Friends. She later hosted — yes, HOSTED — SNL in 1999.”

23. Perry banging his head on the metal drawer in “The One With the Cuffs” was accidental. 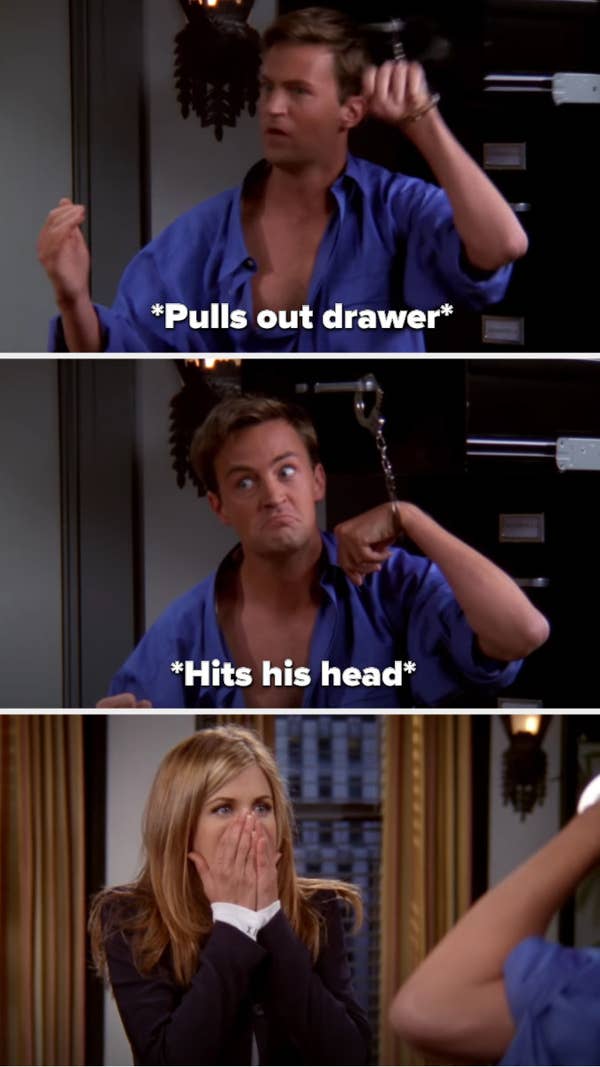 Chandler pulls at his handcuffed hand and pulls out the drawer of the filing cabinet, hitting his head, causing Rachel to put her hands over her mouth

24. LeBlanc injured his arm in “The One Where No One’s Ready,” which is why Joey’s arm is in a sling in the next episode.

“When Joey’s arm is in a sling and they said it’s because he was jumping on the bed, LeBlanc really injured his shoulder filming the previous episode, ‘The One Where No One’s Ready.’ Joey and Chandler spend that episode fighting over a chair, and LeBlanc hurt himself jumping across the coffee table.”

25. “The One Where Rachel Tells Ross” originally featured a storyline where Chandler made a bomb joke at an airport, leading to him and Monica being detained, but it was cut due to 9/11. 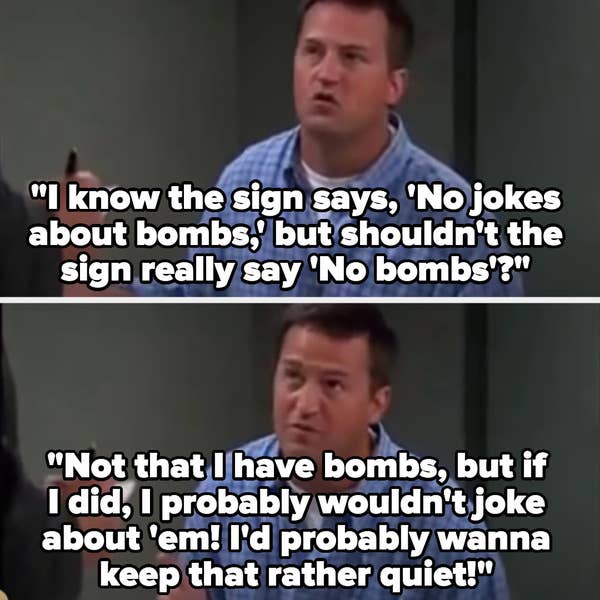 “In Monica and Chandler’s honeymoon episode, instead of the couple one-upping them, Chandler was supposed to make a joke bomb threat and get taken away by security. They ended up having to reshoot because it was set to air soon after 9/11.”

26. And finally, although 9/11 happened as the show was airing, Friends didn’t incorporate it into the storyline. Instead, the show honored New York City and its firefighters in the background of many shots, as seen below.

“Even with the show being set in New York, the writers, producers, and actors decided not to include 9/11 in a storyline. Instead, they would have the characters wear shirts, hats, and jackets with NY firefighters, police officers, and so on to show their support.”