1. In How I Met Your Mother, when every scene from the “Bad News” episode included hidden numbers that secretly counted down from 50, and when it got to zero Lily appeared and told Marshall that his dad died.

“The counting down throughout the whole episode was genius and done so well. You have no idea what they’re counting down to, and then BAM, it shoots you right in the heart. One of my favorite episodes of any show ever.”

2. In The Haunting of Bly Manor, when everything unfolded in the finale, and it was revealed that Hannah was actually staring at her own dead body down the well when Dani met her in the first episode.

“The first episode of the season showed Hannah at the well, staring blankly into its hole, but we didn’t actually learn why until the finale. The reveal in the finale of her being killed and looking down at her OWN body was chilling and brilliant.”

3. In Community, when they spent the first two seasons casually mentioning the name “Beetlejuice,” and after the third time an actual Beetlejuice appeared in the background, just like he does in the movie. 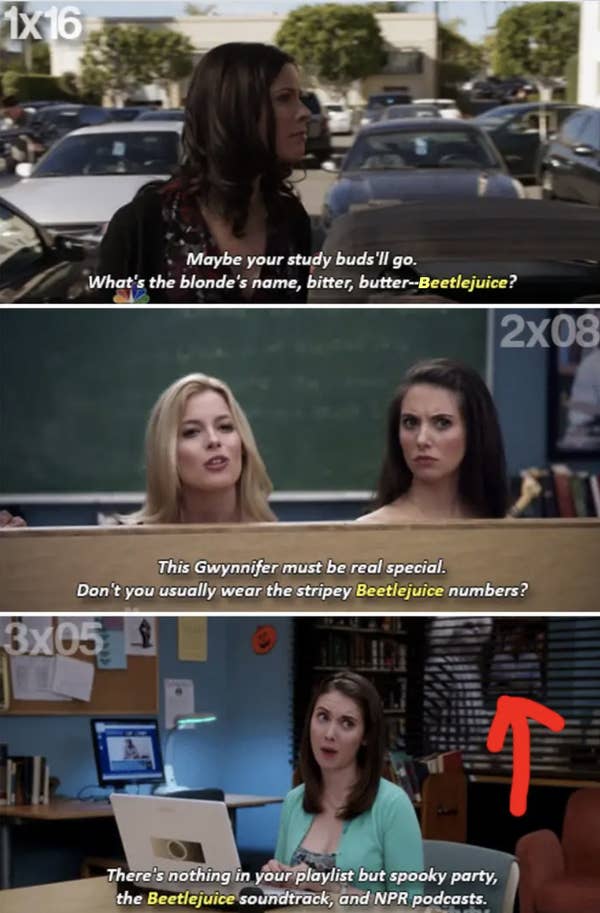 “In the movie, Beetlejuice appears after you say his name three times. So, in Community, after Annie said ‘Beetlejuice’ for the show’s third time, someone dressed as Beetlejuice walked across the screen in the background. It’s so subtle, and you barely notice it, but when you do, it’s pretty funny and clever.”

4. In Grey’s Anatomy, when an unrecognizable man was brought into the hospital in Season 5, and he traced the numbers “0-0-7” onto Meredith’s palm, calling back to O’Malley’s “007” nickname from Season 1 and revealing that he was actually George.

“O’Malley was given the nickname “007” in Season 1 when he froze during his first surgery. In Season 5, he was rushed to the hospital after being hit by a bus. Everyone referred to him as John Doe because he was unrecognizable and couldn’t speak, so he traced “007” onto Meredith’s palm, alerting her of his real identity. It was brilliant, and I always get goosebumps the moment Meredith realizes it’s George.”

5. In The Good Place, when Eleanor figured out at the end of Season 1 that they were actually trapped in the Bad Place, but everyone was made to think they were in heaven. 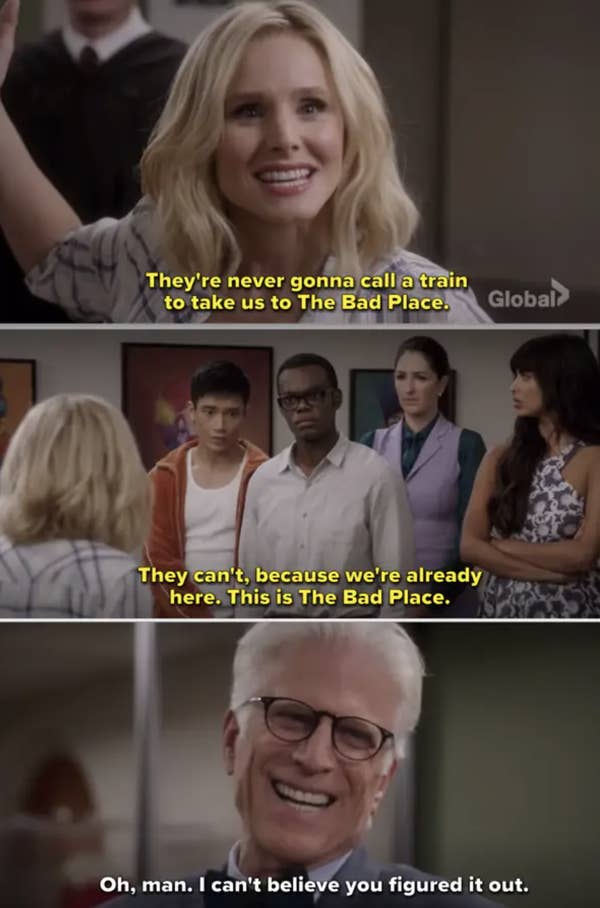 “The most clever moment in TV has to be the plot twist at the end of the first season of The Good Place. it just came out of nowhere, especially for a lighthearted sitcom. It really showcased the fact that The Good Place would be a show that redefined the genre.”

6. In That ’70s Show, when the series ended with everyone counting down to the new year, and the screen cut to black the second it became 1980.

“I mean, the show was only about the ’70s, so this made perfect sense. It was such a smart way to illustrate it and to end the series.” 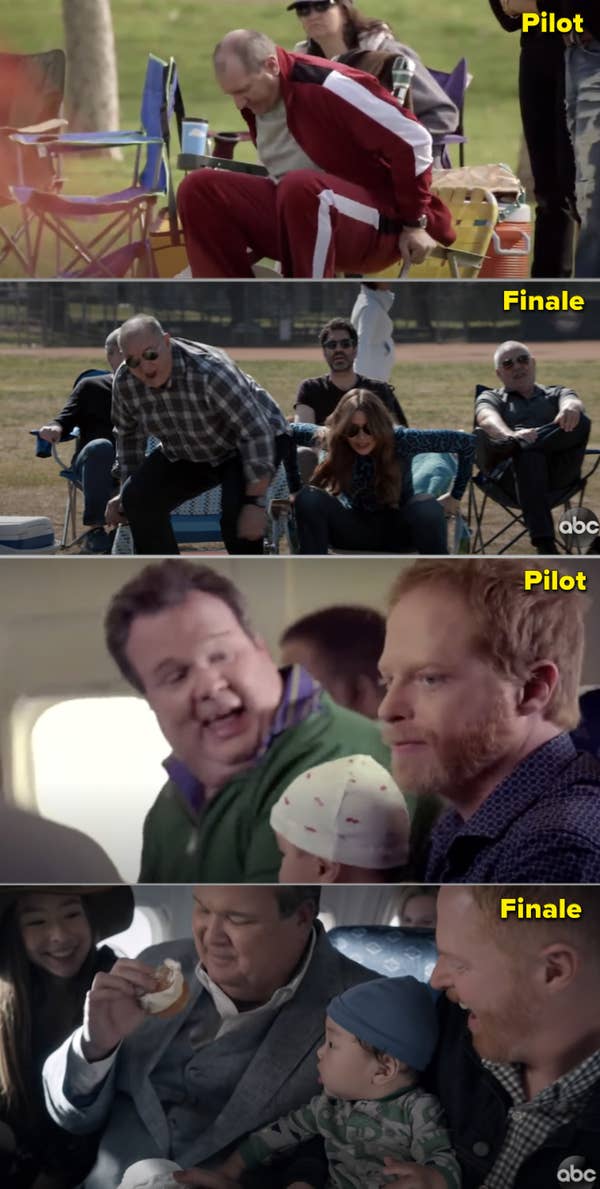 “The last scene of the last episode is full of callbacks to the first one. Mitch and Cam were on a plane with their new kid (cream puffs in hand), Jay and Gloria were next to each other at their son’s soccer game (now both of them were struggling to get out of their chairs), and Phil and Claire were planning. It was really neat.”

8. In Fleabag, when the Priest could sense that Fleabag was breaking the fourth wall and looking directly at the camera, and then he surprised the viewer by doing it too. 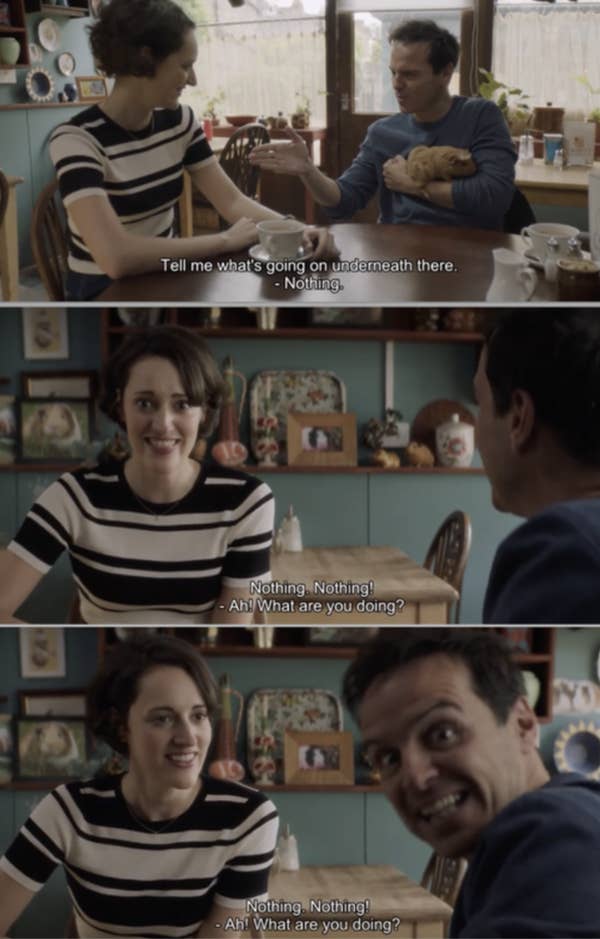 “I absolutely loved every time the Priest noticed that Fleabag was breaking the fourth wall and talking to us. It showed that he really saw and understood her. Also, the ending of Fleabag was so clever when she turned to the camera and shook her head ‘no’ to the audience, as if she was choosing to leave us and focus more on the relationships she had in real life.”

9. In How to Get Away With Murder, when the series ended with the exact same shots and dialogue that it started with, only the professor changed from Annalise Keating to Wes’s son, Christopher. 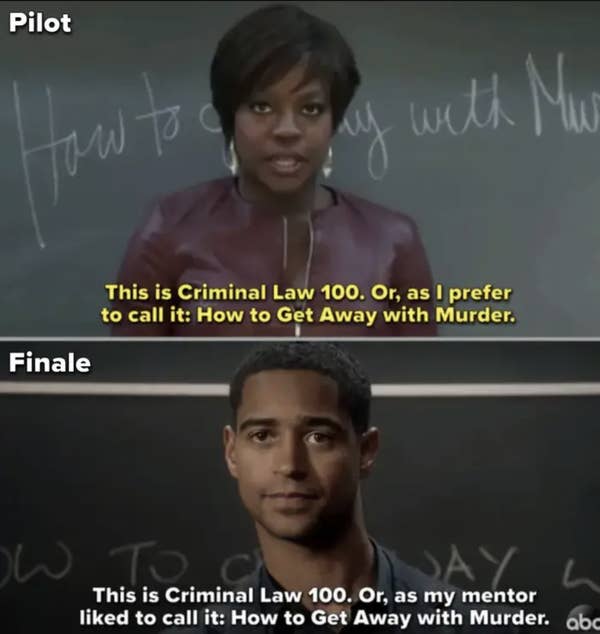 “The show had so many great plot twists, and you never knew who to trust, but that ending was perfect.”

10. In Game of Thrones, when Arya tried to kill the Night King, but he pinned her arm back, so she dropped the dagger, caught it with her other hand, and stabbed him. 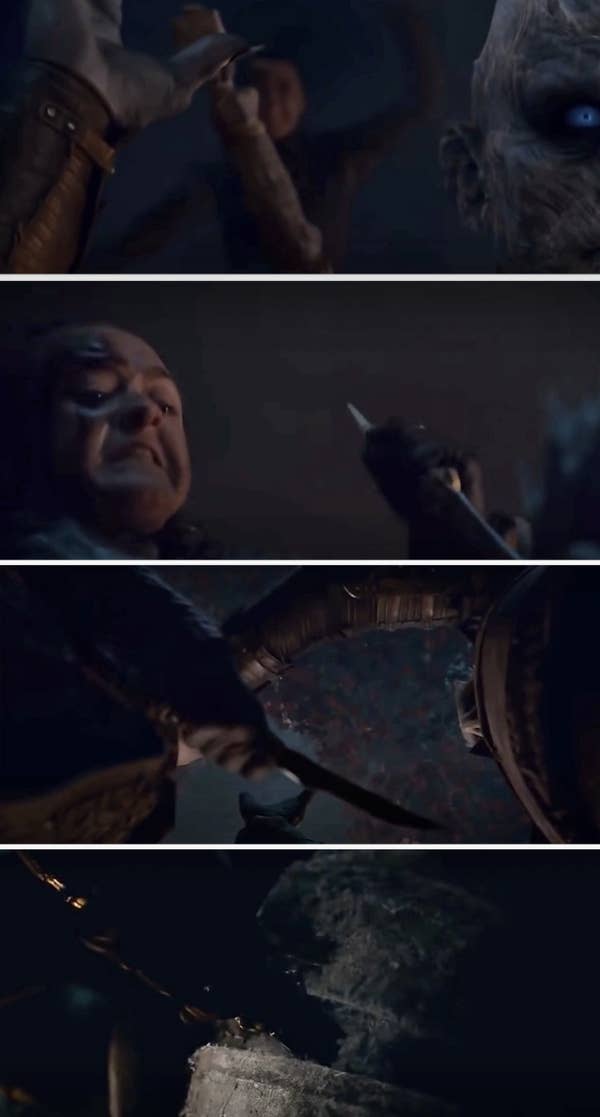 “I don’t think this list can be made without the jaw-dropping moment when Arya goes to attack the Night King, just for him to turn around and grab her by the neck. You think that’s the end of the biggest badass in the show, but then Arya reminds us why she has this title when she drops the dagger and catches it with her other hand and stabs the Night King and kills the Walkers. The emotional roller coaster that occurred in 45 seconds is what puts this moment in a league of its own.”

11. In Ozark, when the final line of Ben’s five-minute-long monologue to the taxi driver cleverly revealed absolutely everything you needed to know about Ben and his mental illness.

This particular scene is so clever that it’s actually kind of breathtaking. The whole montage is one longgggg, intimate, one-sided convo where Ben bombards the taxi driver with all of his hopes and fears. Then he utters the final line, which implies that Ben just shared all of that personal information unprompted, and the taxi driver merely asked how his day was. The scene does a perfect job of illustrating exactly who Ben is, and it gives the audience a closer look at his character and his mental illness.

12. In Veep, when Selina and her team hoped that something major would happen in the news — like Tom Hanks dying — to distract the media from reporting on her scandal in the pilot episode. Then, in the series finale, Tom Hanks’s death overshadowed the news of her own funeral. 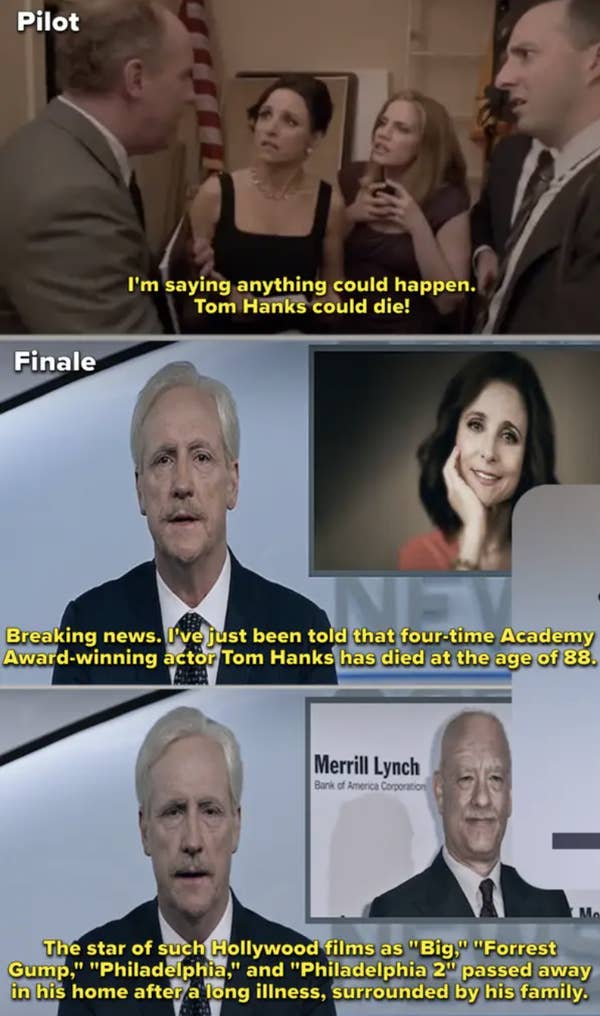 “The finale called back to so many hilarious moments throughout the show’s run, including the Tom Hanks bit in the pilot. It was brilliant.”

13. In American Horror Story: Murder House, when Violet and the viewer were tricked into thinking that Tate saved her, but she later realized she was actually dead and her spirit was trapped in the house.

About halfway through the season, Violet tried to kill herself with a bunch of sleeping pills, but they showed a scene in which Tate saved her and got her to throw up everything…or so we thought. This massive, clever twist revealed that Tate couldn’t actually save Violet, and her spirit was trapped in the house where she ultimately discovered her dead, rotting body. Brilliant.

14. In Parks and Rec, when Leslie got a free MRI during her blind date with Chris in Season 2, and he said her body was capable of having triplets the first time she got pregnant. Then, in Season 6, she got pregnant with triplets.

“I just love this moment.”

15. In This Is Us, when Rebecca saw Jack’s lifeless body in the hospital, and there was a split-second flashback to young Jack, almost as if she were trying to preserve her memory of him.

“That flicker to young Jack was perfect. It was as if Rebecca went back to her earliest memory of Jack, but then he was gone in the blink of an eye, sort of like she was trying to relive their whole relationship. What a brilliant touch to an incredible scene.”

16. In Lost, when the final scene of the show perfectly mirrored its first scene from six years earlier, only everything happened in reverse. 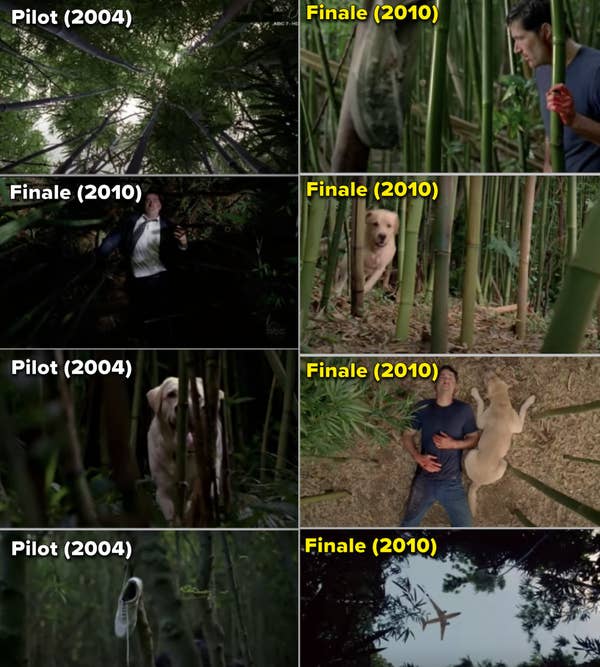 “The first and final scenes both had Jack flat on his back, looking up through the palm fronds, and Walt’s dog appearing next to him. It was a strange, confusing show, but those last scenes and the music were A+++++++.”

17. In Jane the Virgin, when the show revealed after five seasons that Jane’s son was actually the narrator all along.

“My jaw dropped! They had this planned for five seasons.”