1. First, Elizabeth Olsen and Paul Bettany improvised Wanda and Vision’s final goodbye in Avengers: Infinity War. Before filming the scene, Lizzie and Paul talked a lot about what their characters mean to each other. 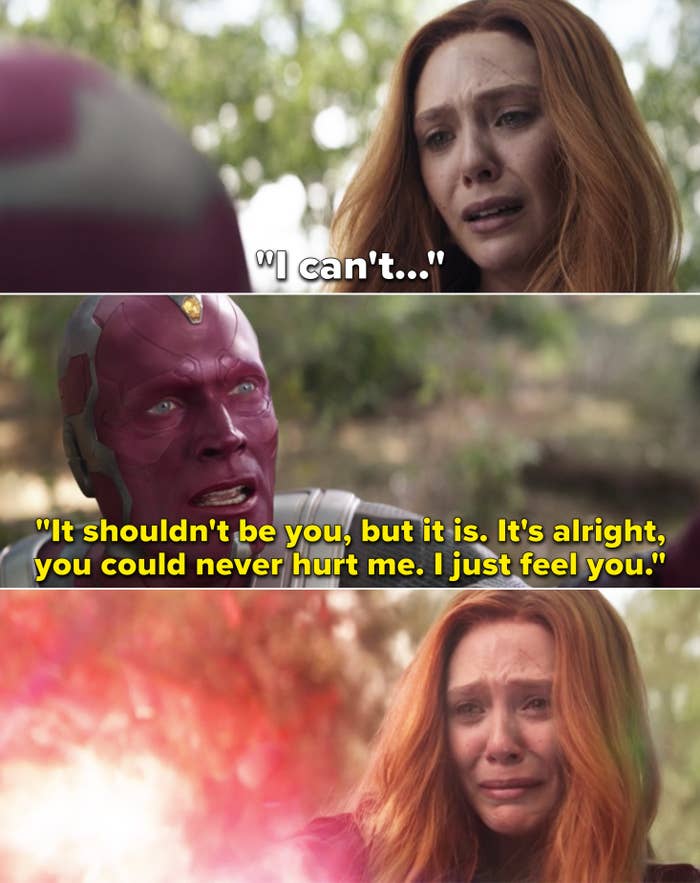 Paul said what was helpful with filming this important Wanda and Vision scene was having “a fantastic partnership that is just filled with trust and respect.”

2. And Tom Holland came up with Peter saying, “I don’t wanna go” before he turned to dust in Avengers: Infinity War on the spot. When Tom wants to make himself cry, he repeats a phrase over and over again, and that’s what inspired this. 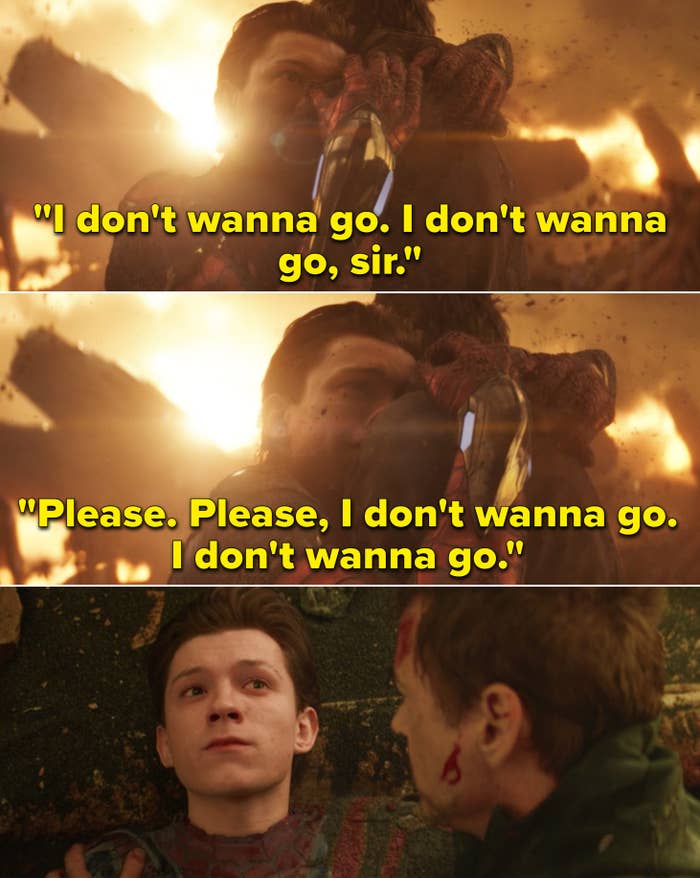 Holland explained that they did a long improvisation during the first take, and it “sparked a great idea.” Eventually, they reworked the scene, and this iconic moment was born.

3. On Euphoria, the flashback that showed Rue fighting with her mom was completely improvised by Zendaya and Nika King — the script simply said “Rue and her mom have a fight.” 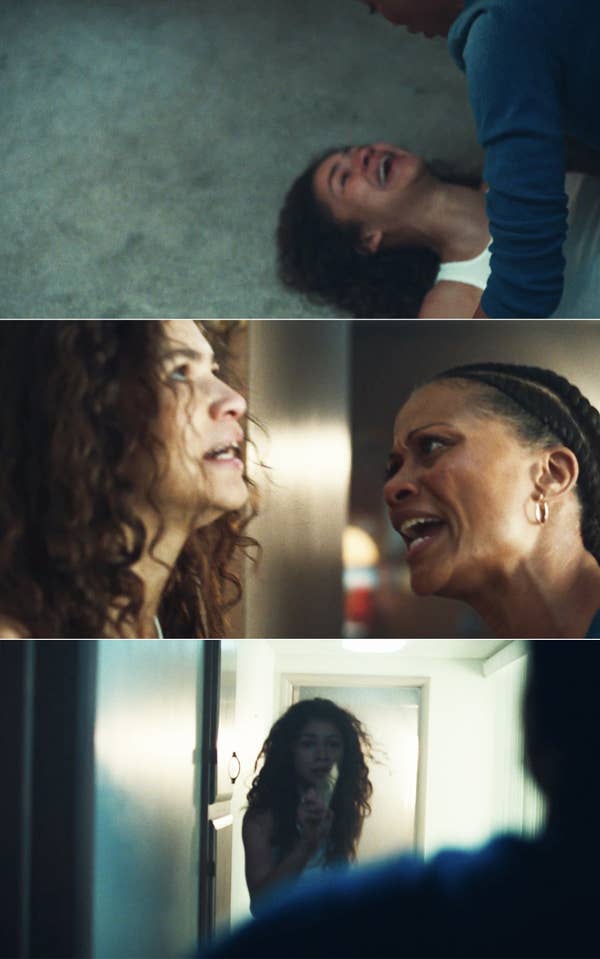 Creator Sam Levinson told Zendaya and Nika, “I want you guys to go at one another’s necks. Just go, as hard as you want to go. If she goes hard, you go harder.”

4. In Little Women, Laurie constantly saying, “I love you, Jo” during Jo’s big speech about not wanting to marry him was unscripted. 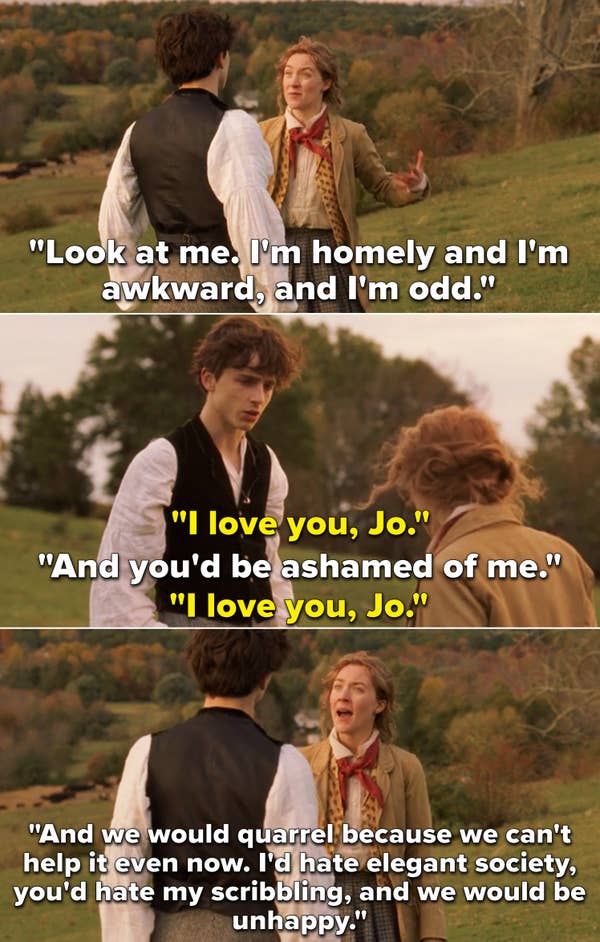 The original script simply has Jo’s dialogue without Laurie’s interruptions. You can actually read the full script here.

5. On Dead to Me, Linda Cardellini came up with the line Judy utters after learning Abe died in the moment. 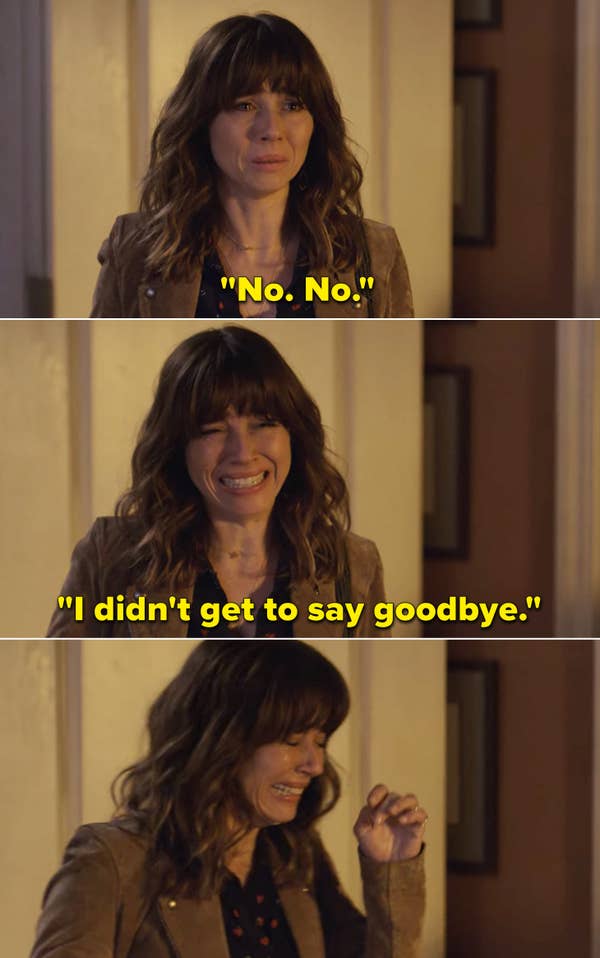 This moment was actually filmed on the last night of production for Season 1. In fact, a lot of times Linda and Christina Applegate would improvise moments long after they finished the dialogue in the script, and creator Liz Feldman would wait to say, “Cut.”

6. Oprah ad-libbed what Sofia says while she’s thanking Celie during the dinner table scene in The Color Purple. After filming, Whoopi Goldberg told Oprah, “Today, you became an actress.” 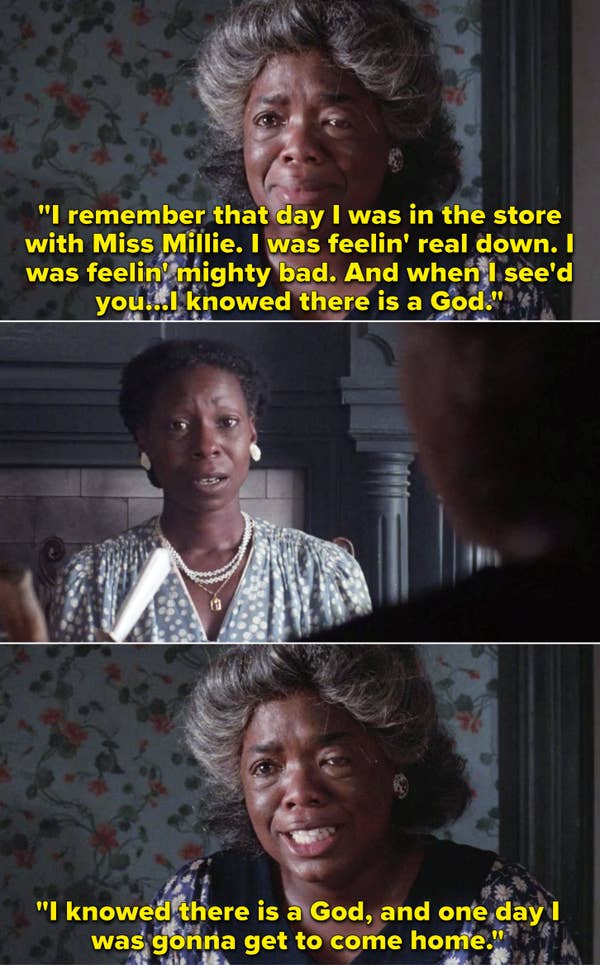 Looking back on filming, Oprah recalled Steven Spielberg simply telling her, “Just tell Miss Celie how you felt when you saw her in the store,” and she ended up “making it up” as they shot the scene.

7. Anya Taylor-Joy came up with the moment when Beth toasts Alma on the plane after her death during filming of The Queen’s Gambit — it wasn’t scripted and she thought it would be a small and impactful moment. 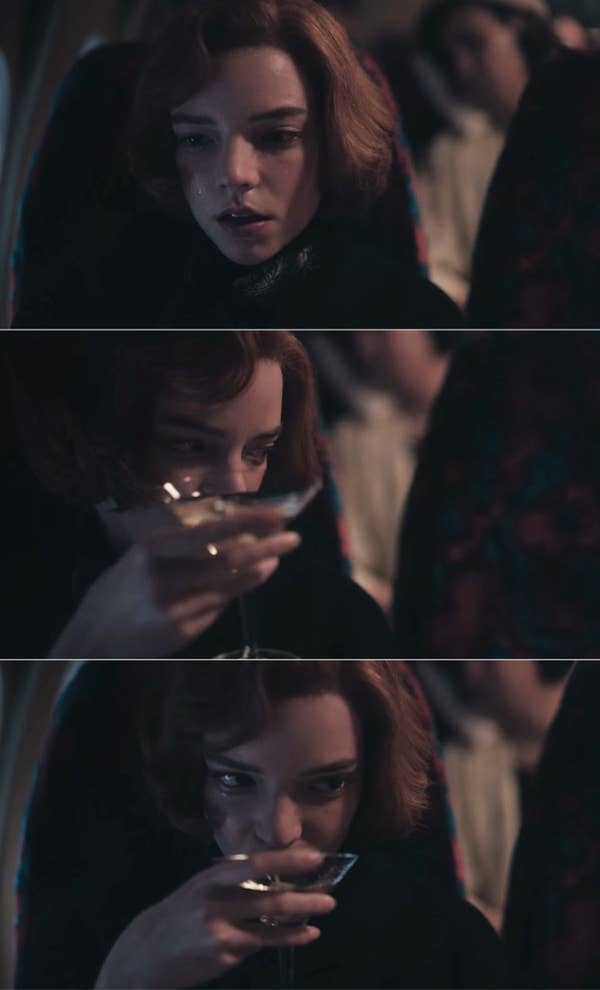 Creator Scott Frank said Anya is the best crier he’s ever worked with and there were so many small moments like this one that Anya made memorable because of her ability to shed a single tear.

8. Notably, Rutger Hauer reworked the iconic “tears in rain” monologue from Blade Runner and only kept “two lines” from the original script. 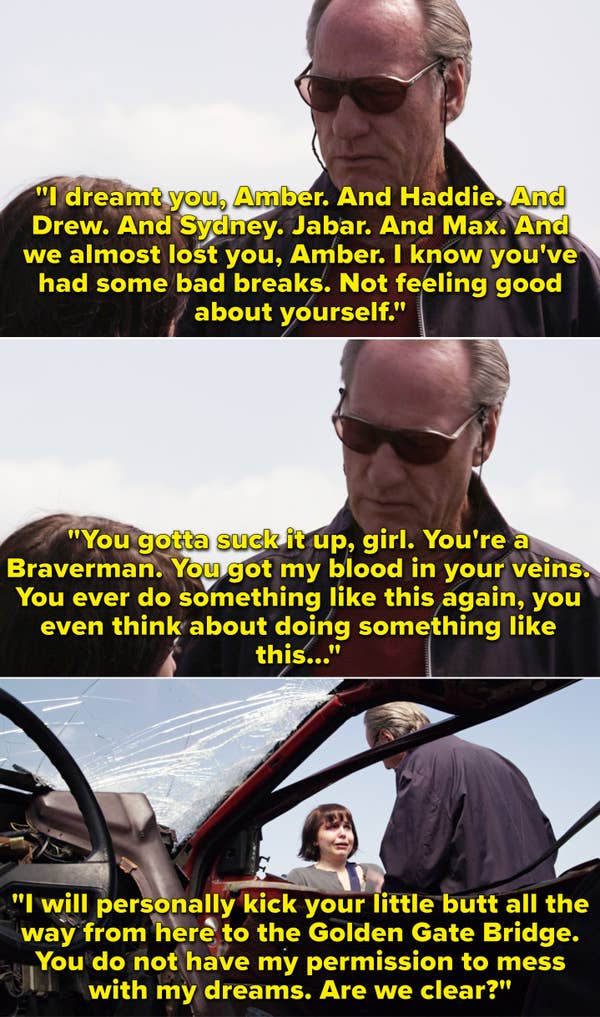 According to Rutger, the only two lines he kept were, “attack ships” and “C-beams.” He also gave a lot of credit to director Ridley Scott for allowing him to change things and interpret the character in his own way.

9. Craig T. Nelson and Mae Whitman improvised the entire scene on Parenthood when Zeek took Amber to see her wrecked car after her horrific car crash. 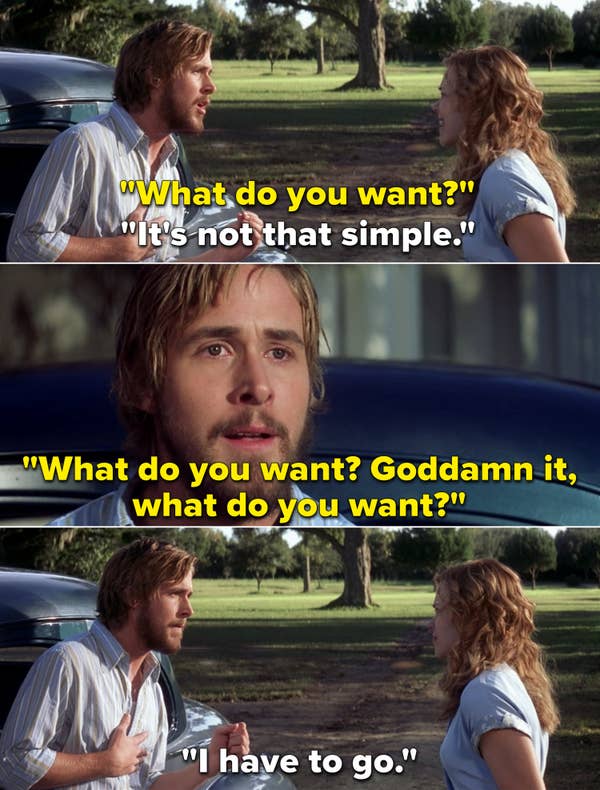 Reflecting on filming the scene, Mae said, “[Craig] improvised this incredibly, beautiful, honest, real, raw speech of like pain and heartache, and stuff I really knew he felt about his own family. So, all my reactions in that scene are totally surprised and genuine.”

10. In The Notebook, Ryan Gosling decided while filming to repeat the phrase “What do you want?” during this scene between Noah and Allie. 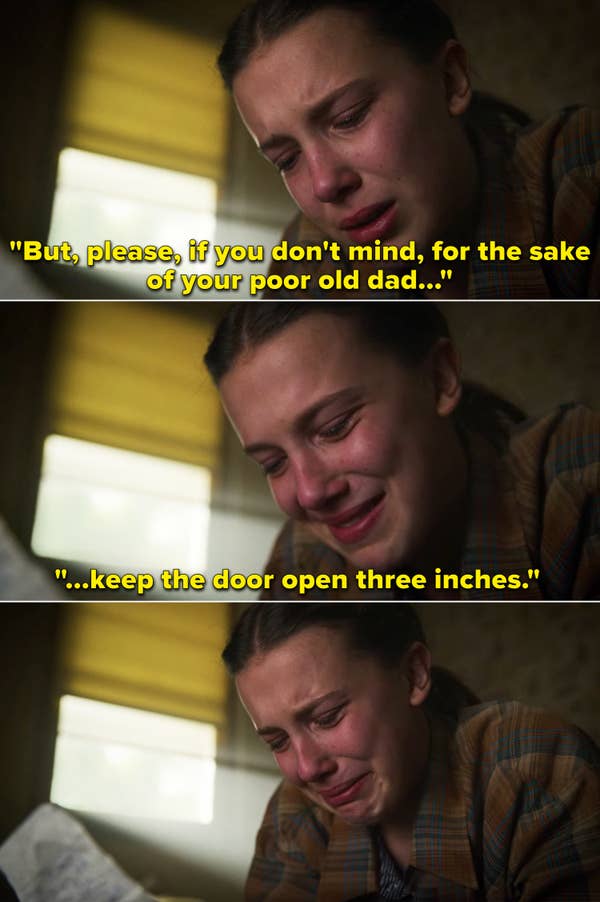 Director Nick Cassavetes reflected on the moment, saying, “It became one of the most iconic things from the film [that] wasn’t in the script. He just knew it. I’m a literary guy, I was a lit major in college and I like words, but I also like improvisation. He was so on it. We just let him go.”