“The entire Ross/Rachel ‘romance’ storyline on Friends. Ross was so jealous and whiny, and Rachel was incredibly stuck up. If you have broken up like 15 times, it just wasn’t meant to be. Who is supposed to root for a relationship built on such crappy ground?”

3. And Dan’s reveal as Gossip Girl.

“It was so random and unwanted, there was no relevance to him being Gossip Girl and everyone automatically just forgave him in the end. Him being Gossip Girl was just a major letdown and all the things he posted especially about his sister got me so irritated and just made me hate him even more. He tried to justify his actions by saying he was the outsider but I was just not buying it.”

“Every storyline involving Spencer’s personal life on Criminal Minds. Kidnapped and held hostage? Become a drug addict? Focus on that for half a season and then pretend it never happened. Oh, you finally got a girlfriend? Sorry, we’re going to murder her in front of you. Mom’s got dementia? You want to help her? Sorry, you’re going to jail.”

5. Olivia and Fitz on Scandal.

“Olivia Pope continuously getting back together with President Fitz. She’s too good for him, and his character bugs me.”

6. The last season of How I Met Your Mother.

“They made us root for a couple to get married for an entire (filler) season just to have them divorced in five seconds in the finale? Make us fall in love with the mother we’ve been waiting nine seasons to meet just to kill her off in less time than the divorce? NO EFFING THANKS. The writers basically just used the mother as a uterus so Ted could still have children and end up with his ‘soulmate Robyn’. Bullshit.”

“We waited so long for him to heal from his gunshot, and he and Jane are finally happy, and then he’s just gone.”

8. Everything on Once Upon a Time.

“Once Upon a Time’s storyline has been going on for way too long. I thought it was going to be wrapped up when they all realised who they were, but no. It just kept going and going!”

“There are so many storylines on Pretty Little Liars that piss me off but if I have to choose one, it’s the newest storyline where A.D. impregnated Alison with Emily’s eggs. Like… Yikes!”

“Terribly done, terrible storyline. They could have done a trans storyline so well if they had really tried. Instead it came off transphobic and harmful, and frankly, it wasn’t shocking. My mouth didn’t drop like when Mona was revealed, or when Toby was revealed. Even Ezra’s reveal was better! Plus, they’re the leading show of LGBT women deaths, even though it’s a supposedly ‘LGBT friendly’ show.”

11. The school shooting on Glee.

“The school shooting episode of Glee where Becky accidentally shoots a gun. It’s a sensitive topic and was completely wrong for them to use one of the most beloved and only character with Down syndrome as the shooter. Even though no one was hurt, I lost respect for the show after that.”

“For me it was on Glee when they decided to have the character of Coach Beiste be a trans man. The storyline pissed me off because up until literally that season the character’s whole storyline was that she wanted to be taken seriously as a feminine woman, despite her more masculine appearance. The whole thing just seemed incredibly out of place and it just seemed like they were trying to push an important plot onto a random character for no reason. They could have done the transitioning storyline with the trans woman character that they already had (Unique) but, as with most Glee plots, it was a WASTED opportunity.”

13. Jim and Pam’s marital issues on The Office.

“We waited four seasons for them to get together already! THEN THEY HAVE THE AUDACITY TO MAKE THE WHOLE LAST SEASON ABOUT OUR FAVOURITE AND MOST PRECIOUS COUPLE HAVING MARITAL ISSUES?!”

14. Lorelai and Christopher getting married on Gilmore Girls.

“It was so out of the blue and was infuriating to watch. Actually, the entire last season was painful but this storyline was the worst.”

“Like come on. I would have been okay with it if it was just a kiss, but Rory lost her virginity to Dean. TO A MARRIED MAN!”

16. Everything about Dorne on Game of Thrones.

“Anything to do with godawful Dorne in GoT. If it were possible to erase an entire arc from that show, it would be them.”

“Like, we understood, he was a terrible person who did terrible things, but they made him kill his own brother in cold blood, like WTF?!”

18. Everyone coming back to life on The Vampire Diaries. 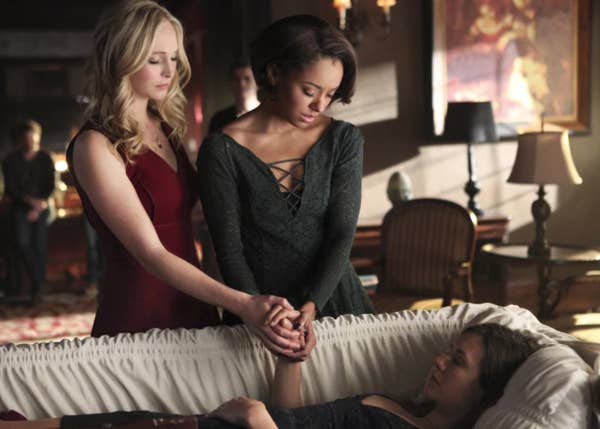 “The main characters were continually dying and coming back to life. Every other supernatural being has one, maybe two chances. Not 30. It was getting old. It wasn’t even slightly suspenseful when they died. Also the whole ~three years later~ thing going into the last couple seasons, that confused the hell out of me… the last two seasons really shouldn’t have existed, period.”

19. Izzie having ghost sex with Denny on Grey’s Anatomy.

“Izzie Stevens sleeping with a ‘ghost’ Denny Duquette. We later found out it was a brain tumor… THE. WORST.”

20. Carrie breaking Aiden’s heart, not once but TWICE on Sex and the City.

“Why on earth bring him back only to have her to break his heart again? Why even have them get engaged and move in together?! Still angers me when I re-watch the series. Poor Aiden deserved better.”

“When it took Miley Stewart’s boyfriend the last season to recognise she was Hannah Montana.”

22. Every decision Nancy Botwin made on Weeds.

“When Nancy Botwin is in New York after getting out of jail, and instead of taking care of her family she starts making poor decisions again.”

23. Emily’s dad being alive after ALL THAT TIME on Revenge.

“I mean the WHOLE show centered around the repercussions of his death, and he wasn’t even dead!!!”

25. The latter seasons of Supernatural.

“Most of Seasons 11 and 12 of Supernatural. I hated The Darkness. She had potential, which was squandered when they hired the WORST child actress to play her, and never recovered. Especially when she tried her to drag Dean into bed.
“Then Season 12. I only returned for two things: The promise that we’d be getting Cas-with-a-spine (Season 4) back, and the hint that Mark Pellegrino was going to reprise as Lucifer. He’s just been brainwashed AGAIN, this time by a fucking FETUS. That kid is going to kill someone.”

26. This one storyline on Riverdale.

27. The last season of Dexter.

“The last season was just a big fish flop. First of all, the incest storyline! I don’t care if Debra and Dexter weren’t biological siblings. They were raised together! As siblings! Ew! And then ending it with Debra dying and Dexter becoming a lumberjack? Really?”

28. Landry and Tyra in Season 2 of Friday Night Lights.

“The whole Tyra and Landry murdering a guy storyline. Did not fit in with the show’s themes at all and came out of nowhere. Was such a fantastic show but this was a stupid storyline. Plus then it just disappeared and they forgot about it and never got into any trouble over it…”

29. The switched at birth storyline on Desperate Housewives.

“When Gaby and Carlos found out their daughter was switched at birth. It was so random and it was just an excuse to have Gaby go mental. It lasted way too long and didn’t make sense because Grace and Celia would have been biological sisters and looked nothing alike.”