There are a lot of memorable recurring characters in Friends, but only a couple appeared in all seasons of the show, even if just briefly – and here’s who they are. One of the most popular and successful sitcoms ever is Friends, created by David Crane and Marta Kauffman. Friends premiered on NBC in 1994 and lived on for a total of 10 seasons, coming to an end in 2004 after a lot of ups and downs in the lives of the main characters and various unforgettable jokes.
Friends introduced viewers to a group of six young adults living in New York City and doing their best to balance their social, personal, and professional lives, all while dealing with everything that adulthood threw their way. Ten seasons were enough for fans to get to know Monica, Chandler, Phoebe, Joey, Rachel, and Ross quite well, as well as some of their family members and other characters close to them, like Mike (Paul Rudd), Phoebe’s husband. Friends also featured a number of unforgettable recurring characters, with their own catchphrases, unique mannerisms, and who connected one way or another with the main group.
Some of these recurring characters in Friends became widely popular and won the audience over even if they appeared sporadically and/or briefly, and only a couple were lucky enough to appear in all seasons of the show in some way. First off is the unforgettable Janice Hosenstain (Janice Litman-Goralnik by the end of Friends), Chandler’s long-time on-off girlfriend who wasn’t exactly the group’s favorite person. Janice made an impact with her obnoxious and nasal voice and her “oh my God!” catchphrase, which was often used to announce her arrival at some place. Janice was played by Maggie Wheeler, and she appeared in every season of Friends, sometimes briefly, others for longer as she got back with Chandler a couple of times, though it’s worth noting that her “appearance” in season 6 was just a voice cameo, in Chandler’s Valentine’s Day mixtape. 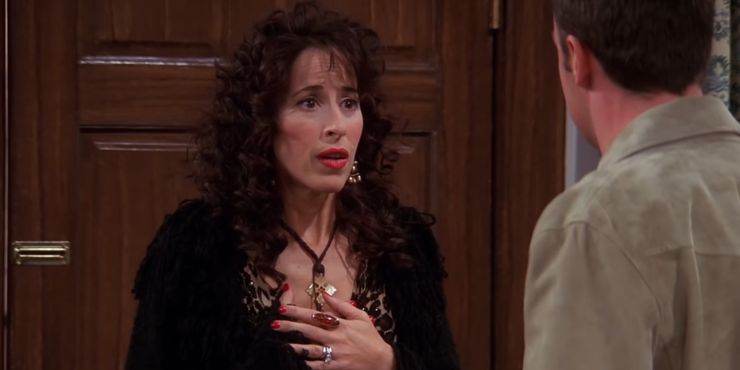 Another recurrent character in Friends who appeared in all 10 seasons is Gunther (James Michael Tyler), the manager of Central Perk who spent the whole show secretly (or not so much) in love with Rachel. Gunther never made it to the main group’s circle but was a strong enough presence in their lives that he was invited to many of their parties, which along with him always being at Central Perk, make him one of the characters to appear in all seasons (even if he sometimes didn’t say a word). Last but not least, Ross and Monica’s parents, Judy (Christina Pickles) and Jack (Elliott Gould), also appear in all seasons of Friends. Judy and Jack always favored Ross over Monica, with Judy having a very tense relationship with Monica and Jack being kinder to her. Judy and Jack are also the only parents of the main characters to appear consistently through Friends, in big part due to the rest of the characters having either divorced, dead, or estranged parents.
All of these characters were connected to the main group somehow, either by blood, a romantic relationship, or simply being an acquaintance who also happened to serve them coffee almost every day. Janice, Gunther, Judy, and Jack might have not appeared too often or for too long in Friends, but their appearances were enough for them to become some of the show’s most memorable recurring characters.