In the fall of 1994, ‘Friends’ entered homes for the first time. Almost three decades later, fans are still gushing over the show, with a recent Friends Reunion taking place and giving the fans more details on what went on behind the scenes. It was a huge success and fans couldn’t help but smile to see the band back together.

Like any other show to last ten seasons, there were certain plot holes along the way. With over 236 episodes, that was bound to happen. Insider found several plot holes, like the fact that Ross didn’t age for three seasons. In this article, we’re looking at another plot hole, which still gets to fans, given the potential of the storyline. It deals with Phoebe and finding her parents. Let’s delve into the plot hole that is still discussed on places like Reddit and Twitter.

Playing Phoebe Wasn’t Easy To Begin With
Lisa Kudrow took on the role of Phoebe throughout the show’s decade-long run. In a revealing interview with Kevin Nealon, Kudrow admitted getting the part was a process in itself, “At the audition, I was the only one who could cope with the audition process and that’s how I got it, I think. So I had to work hard at being Phoebe, you know.”

Kudrow would go on to admit she put a lot of pressure on herself to thrive in the role. It took a talk from Matt LeBlanc to settle her down, “Matt LeBlanc was like, ‘What’s going on with you?’ And I said, ‘I can’t, I don’t think I have it. I mean, I don’t know what I’m doing.’ And he went, ‘You’re here, relax, you got it. You’ve been doing this fucking character for three years. You’re working too hard. That’s your problem. You don’t need to work this hard. Relax.’ And he was right.”

During season three, the spotlight was on Phoebe as in the finale, she finds out that her birth mom is still alive. Despite the allure of the story, she disappears after season five.

The One When Phoebe’s Mom & Dad Vanish
Phoebe’s mom is mentioned a couple of times, but she basically disappears after season 4. Making things that much more bizarre, she doesn’t even attend Phoebe’s wedding. Oddly enough, Phoebe’s dad was also a write-off from the show after just one episode. 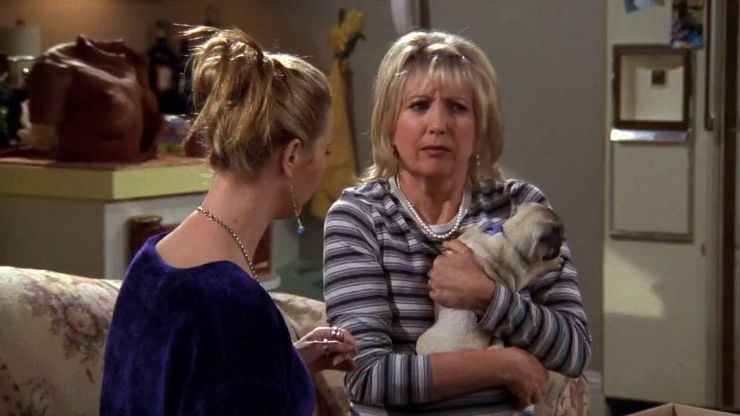 According to a Reddit user, this was a big plot hole and fans seem to agree, “This is one of my biggest problems with the show. I mean, the writers never cared about continuity too much, but I wish at least one of her birth parents would stick around. We saw her father for a single episode. Phoebe didn’t immediately accept him back into her life for obvious reasons but it looked like they would at least try to patch things up. Then, she basically went back to pretending he didn’t even exist. I can assume that she couldn’t forgive him in the end, and her not mentioning him ever again would be understandable. Except for her search for her birth father had been a huge part of her character up to that point, and we never even got to see how it all played out. They could have at least have her mention in passing at some point later in the series that she doesn’t want to talk about her birth father because it’s too painful or something. Instead, we got nothing.”

In the comments on Reddit, fans had a few theories of their own. One fan made mention that MS was a reason for Phoebe’s mom’s absence, “Teri Garr, who played Phoebe’s birth mother, has MS, which was announced publicly around season 8 or 9, so that may have played a part in her not appearing in the later episodes, although I do agree she should have warranted a mention at Phoebe’s wedding.”

Another fan had their own clever theory on Phoebe’s mom missing the wedding, “I just figured she couldn’t make it to the wedding because of all the snow.”

Some fans argue it was just the show perhaps getting tired of the character, like in the case of Ben, “I feel like the writers made Ben start of Ross’ story, then regretted it and tried to ignore that he existed. I mean, come on, he should be a pretty big thing in Ross’ life, don’t you think?”

Who really knows what the logic was. In truth, it would’ve been nice to get some kind of an update during at least the final season. We’ll have to come up with our own storyline as to what happened.