1. In Modern Family, when Phil spent one last day with his dad before he died: 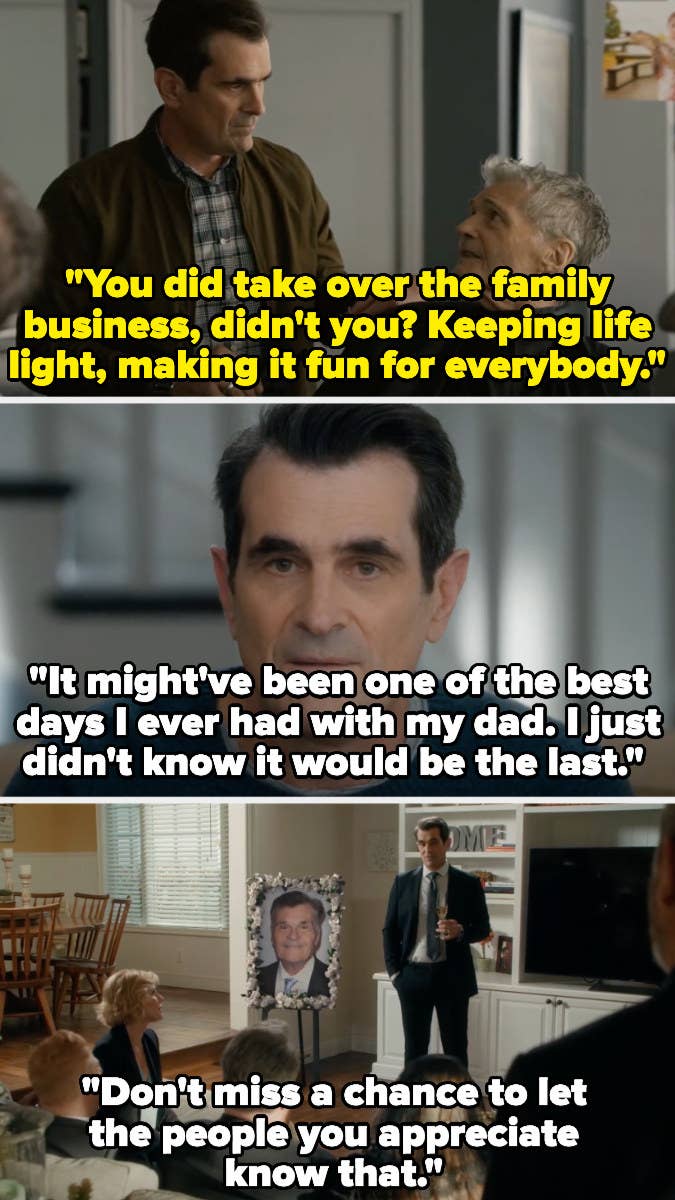 “On Modern Family, when we learn that Phil’s dad passed away. It came from out of nowhere and was such a gut punch. I am fortunate enough to still have my dad, but I can only imagine that I will handle his passing in the same way that Phil handled it. … Maybe it was that realization that just crushed me with this scene and made my eyes erupt with tears.”

2. In Superstore, when ICE took Mateo away: 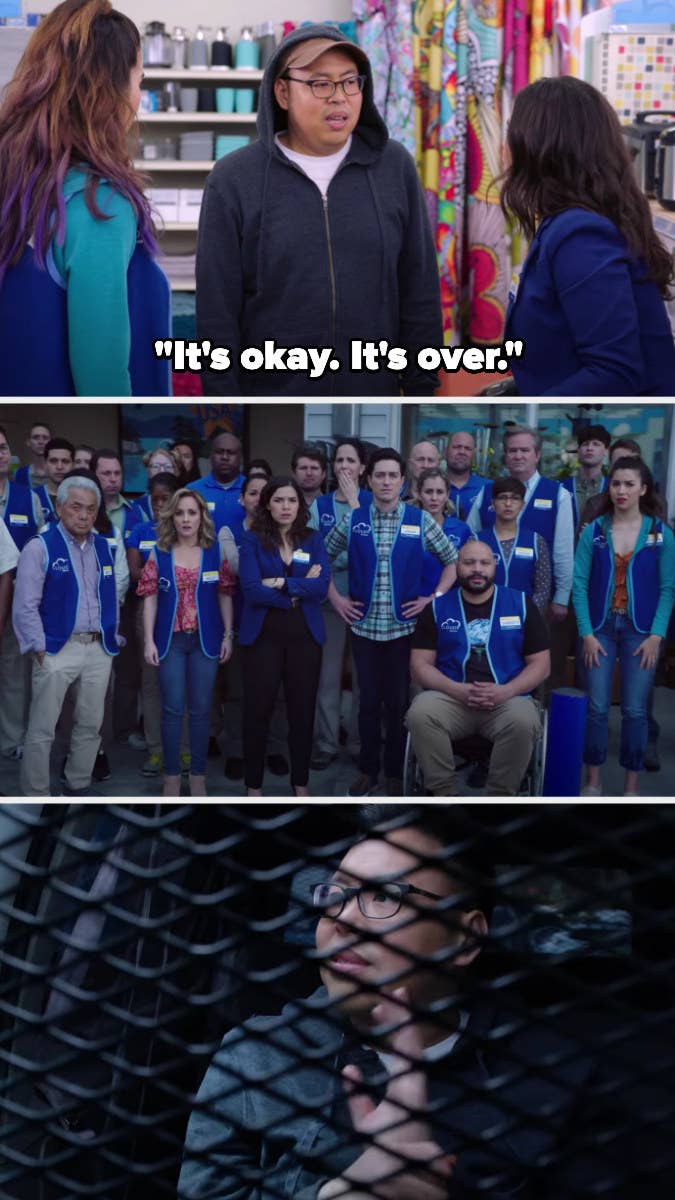 “The whole scene is so charged, and Dina’s energy and defeat when she can’t find a way for him to get out feel so soul-crushing, as we so badly want him to be okay. Then the ICE van just slowly drives past all the employees with Mateo behind bars. I’ve never sobbed over an episode of TV like that.”

3. In Crazy Ex-Girlfriend, when Rebecca attempted suicide on the plane:

“Crazy Ex-Girlfriend never gets the amount of attention it deserves. The part that always kills me is when Rebecca is on the airplane after she has had a nervous breakdown and she realizes that she has no one left in her corner, so she attempts suicide. I always bawl when the airplane signal turns into ‘hope’. But the kicker is in the episode directly after that, [when] she tells Paula that she didn’t want to die, she just wanted the pain to stop…For anyone who has had suicidal tendencies, depression, anxiety, and dangerous negative self-talk, that line cuts so deep.”

4. In Scrubs, when Turk and JD skipped their fancy dinner to stay with a patient who was dying:

“Turk and JD from Scrubs skipping their fancy dinner to spend the night off-duty with a dying man once they realize he doesn’t have any family. The whole scene felt so genuine and not overdramatized for TV purposes.”

5. In Parks and Recreation, when Leslie stood up Ron for lunch: 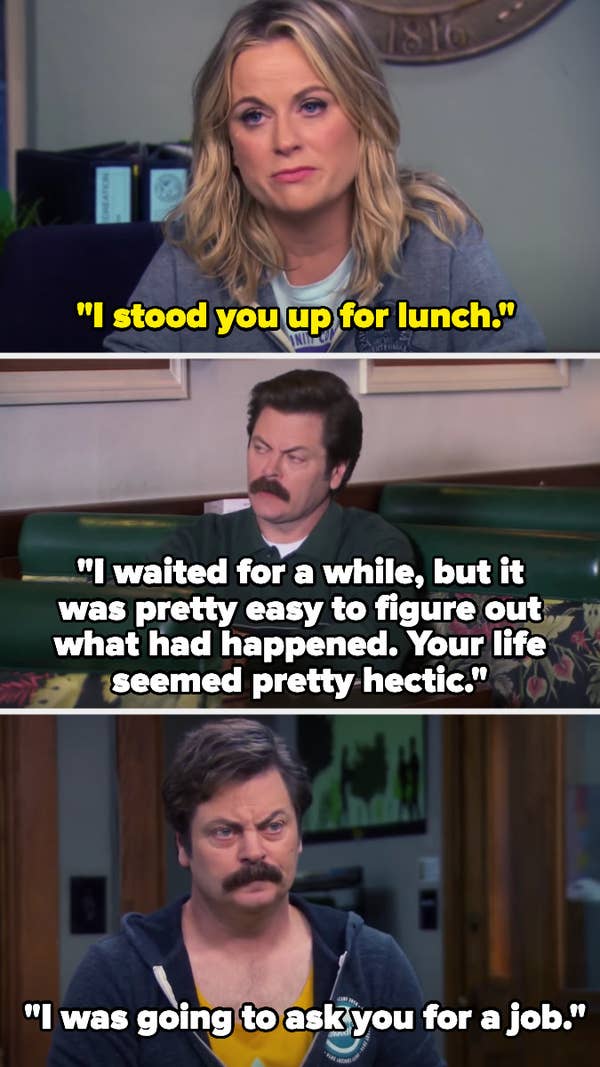 “If you’re a fan of the show and know the history that leads to that moment and the events that follow, as well as the character’s key traits, like Leslie’s loyalty and Ron’s hesitancy to ask for help, it’s gut-wrenching.”

6. In Freaks and Geeks, when Nick and Lindsay both pretended to have completely moved on: 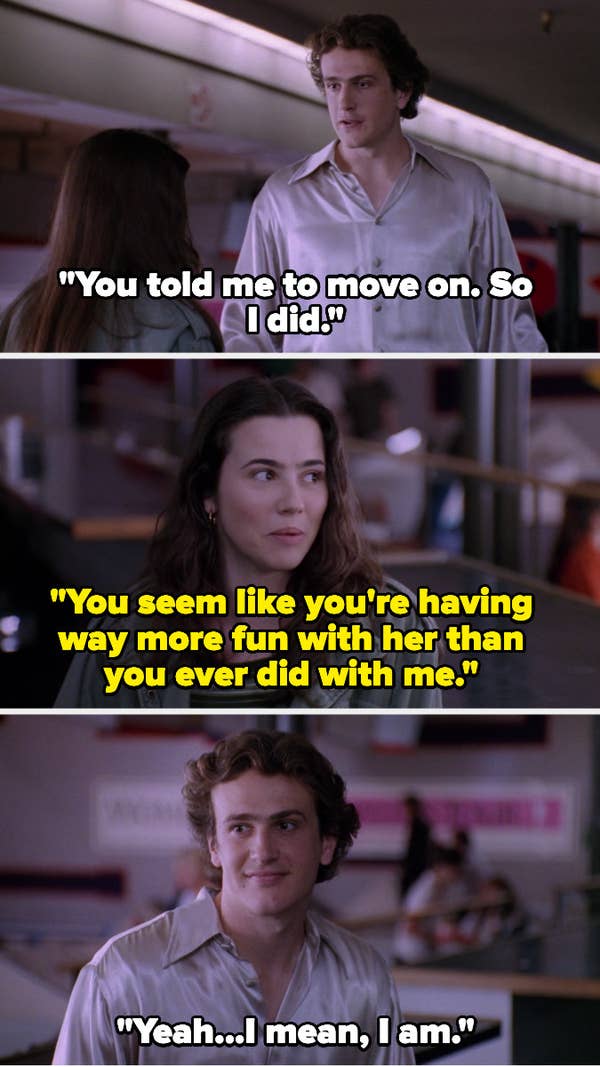 “They’re talking about how they don’t like each other anymore and have moved on, but their facial expressions show that they do still have feelings for each other. It’s just a well-acted and underrated scene and it hurts more that we never know what would have happened.”

7. In Community, when Jeff said goodbye to Annie: 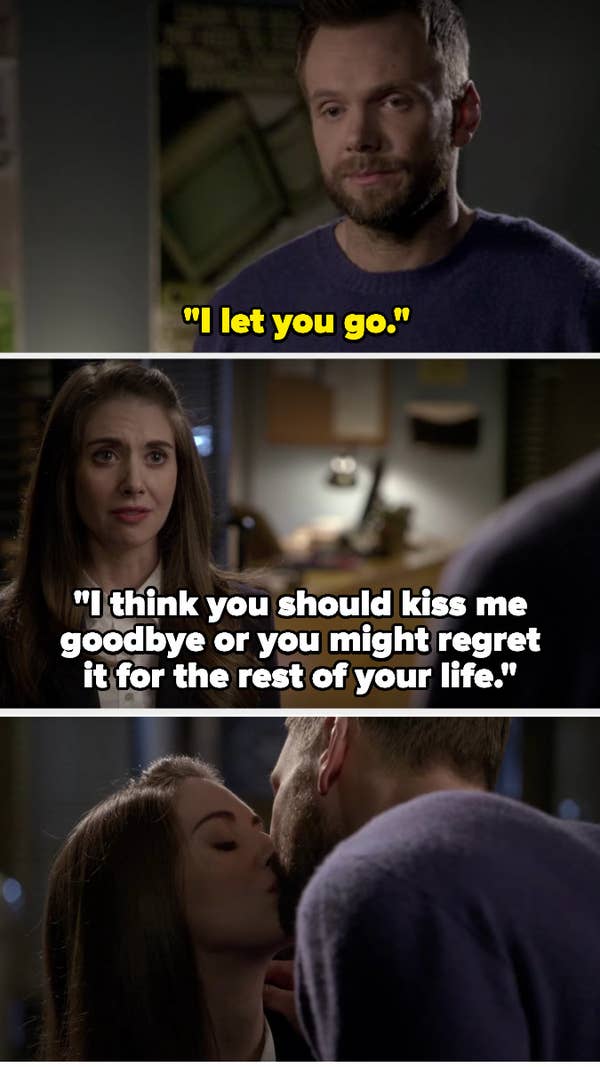 “Jeff started as this jaded cynical man who didn’t believe in love or marriage, but we see in his pitch he would want that with Annie. But because she’s leaving to go off and live her dream, he doesn’t know if she’d be happy to finally be with him. And he chooses to let her go. The whole scene from the pitch until she tells him…to kiss her goodbye for no regrets, is gut-wrenching…Seeing how much growth Jeff has had, from someone who didn’t want to be there in the first place to getting left behind after realizing how much he’s always loved her.”

8. Also in Community, when Troy said goodbye to Abed: 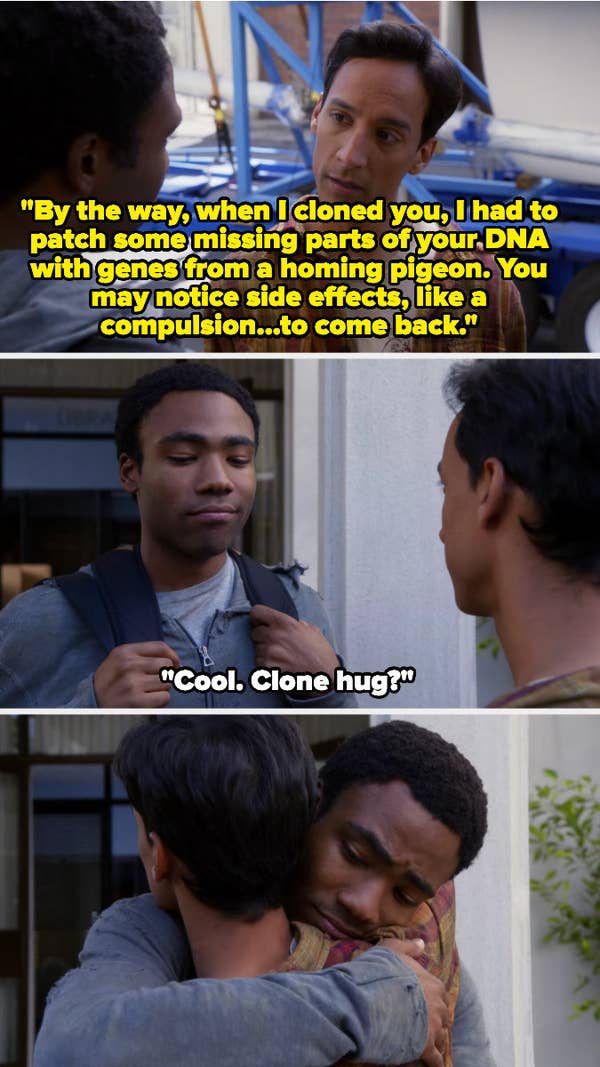 “Abed saying he spliced his DNA with a homing pigeon so he’ll come back made me tear up. Their friendship is the best thing on the show and no one talks about it as a sad moment.”

9. In King Of Queens, when Carrie revealed she’d miscarried: 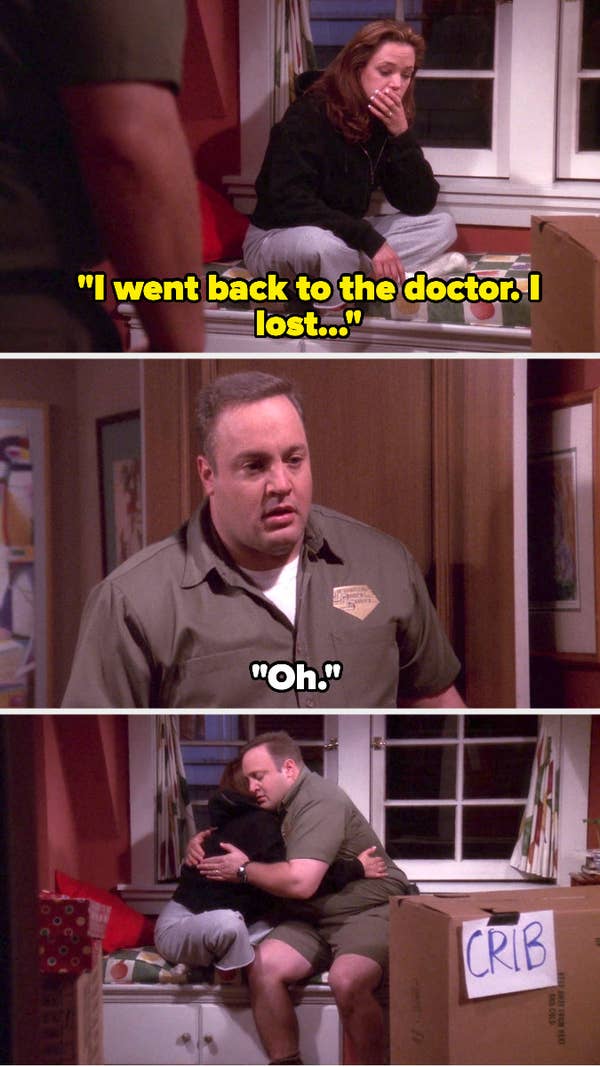 “Carrie’s miscarriage on King of Queens, specifically her sitting among the boxes of baby items they had purchased for the nursery. This is such a powerfully sad scene. We don’t tend to talk about pregnancy loss in our society, and it’s rare to see it on TV…especially in a sitcom. But they took on this topic in a way that was heartfelt and relatable. Leah Remini did a great job in that scene and deserves more credit for it.”

10. In It’s Always Sunny in Philadelphia when Mac came out to his dad through a dance:

“In Always Sunny, when Mac performs a beautiful dance to come out to his dad. His dad leaves but Frank watches with tears running down his face. Incredibly moving.”

11. On Zoey’s Extraordinary Playlist, when Zoey and her father shared one last dance: 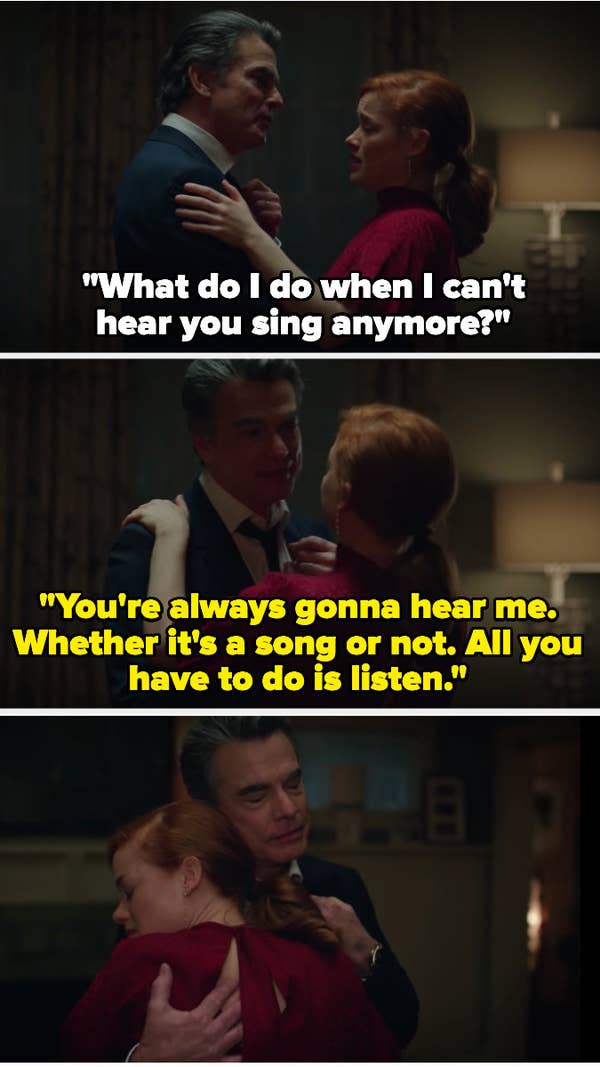 “I’ve just finished watching Zoey’s Extraordinary Playlist and wasn’t expecting it to be so emotional. All of the scenes between Zoey (Jane Levy) and her dying dad Mitch (Peter Gallagher) are heartbreaking.”

12. In Gravity Falls, when Dipper and Mabel went back home at the end of the summer: 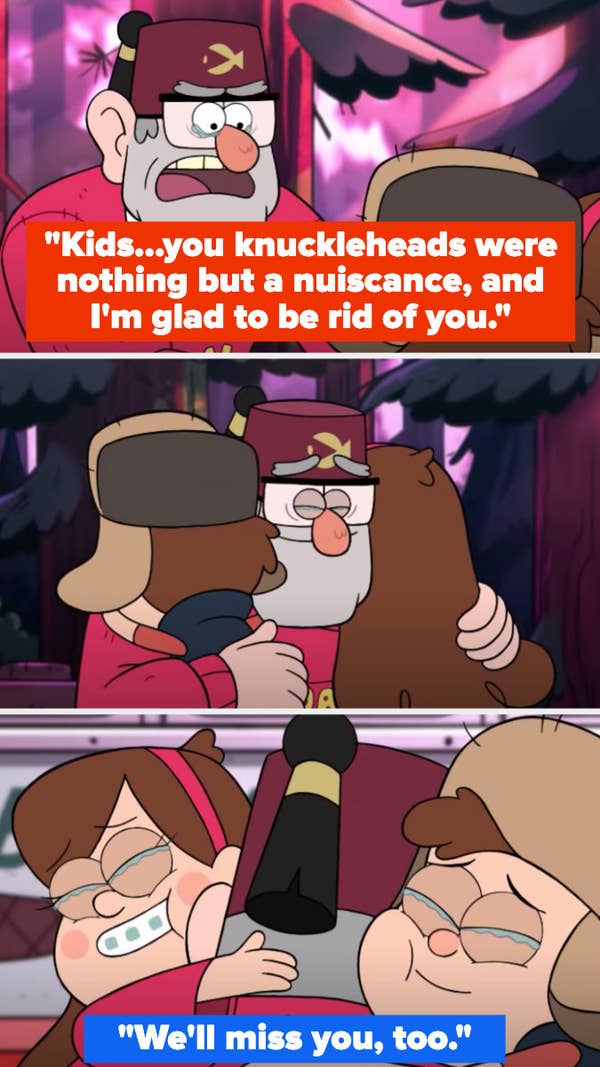 “The last five minutes of Gravity Falls! I’m not ashamed to say my sister and I stayed up live watching the last episode, and when it came to the part with the bus and saying goodbye to everyone, I ugly cried.”

13. In Futurama, when Fry found out it was his nephew, not his brother, who went to space, and that his brother named his son after Fry: 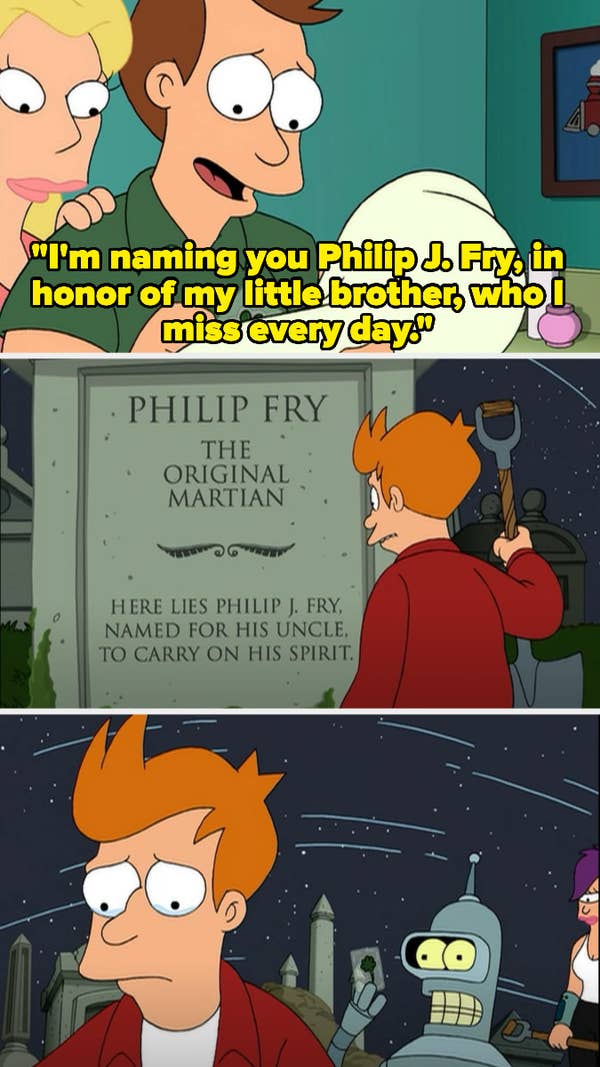 14. On Kim’s Convenience, when Jung visited his dad in the hospital:

“When Jung visits his father in hospital after not speaking to him for 15 years after his father kicked him out. And Mr. Kim is high on painkillers and tells him about the time he held Jung’s hand in hospital when he was a little kid. And the next day, he doesn’t remember that it was Jung who visited him.”

15. On Parenthood, when Kristina told everyone she had cancer: 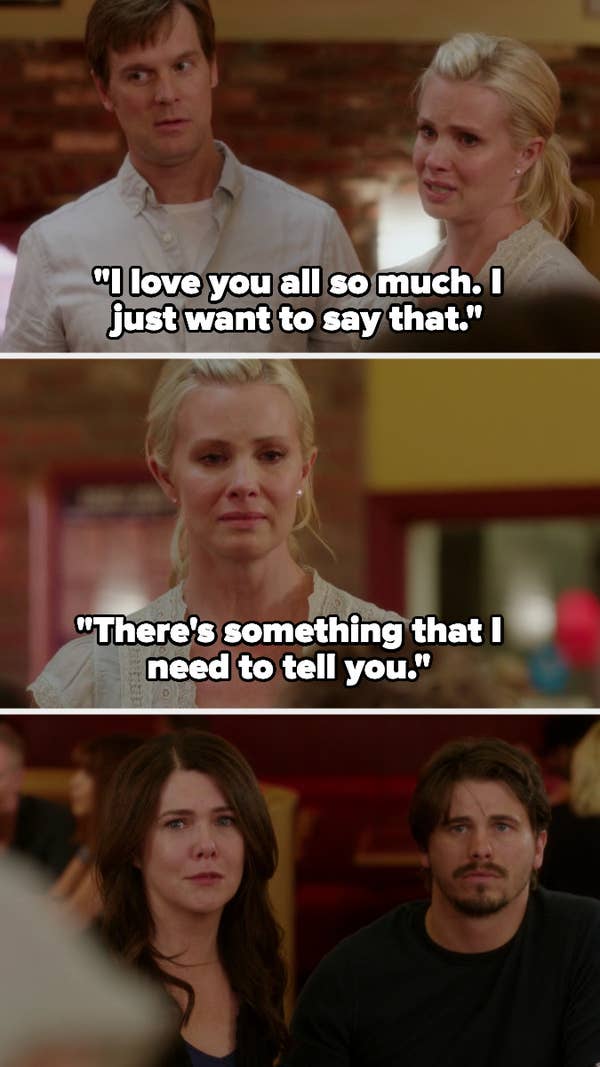 “They’re all out to eat and Haddie shows up from college. Everyone is confused as to why she, Kristina, and Adam are so emotional and then Kristina turns to everyone and says she has to tell them something. The dialogue cuts out and it’s just music and the family’s reaction to finding out she’s sick. I bawl every single time.”

16. In How I Met Your Mother when Lily told Marshall his dad was dead: 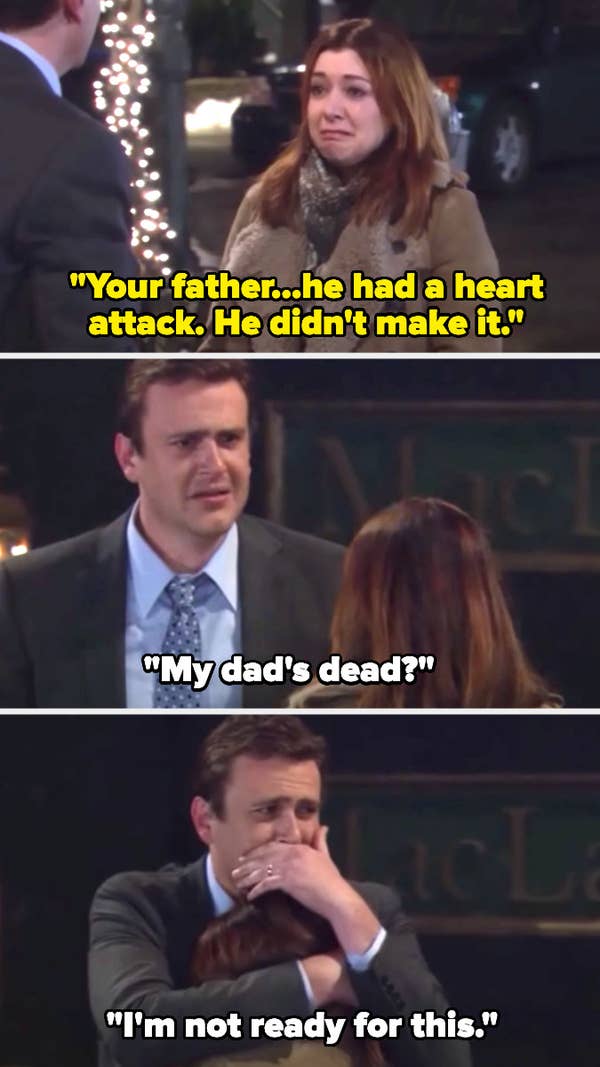 “Alyson Hannigan and Jason Segel did such a beautiful job with that scene. Marshall’s last line, ‘I’m not ready for this,’ is so sad. I bawl every single time I watch that episode.”

17. In Scrubs, when Carla said goodbye to Laverne: 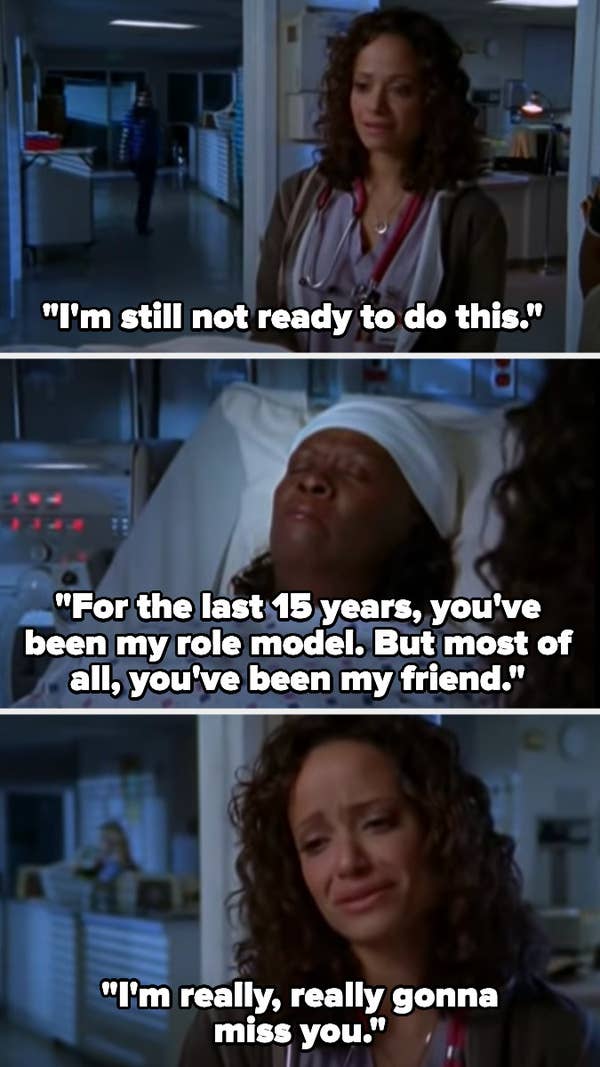 18. In Friends, when Chandler convinced Erica to let him and Monica adopt her baby: 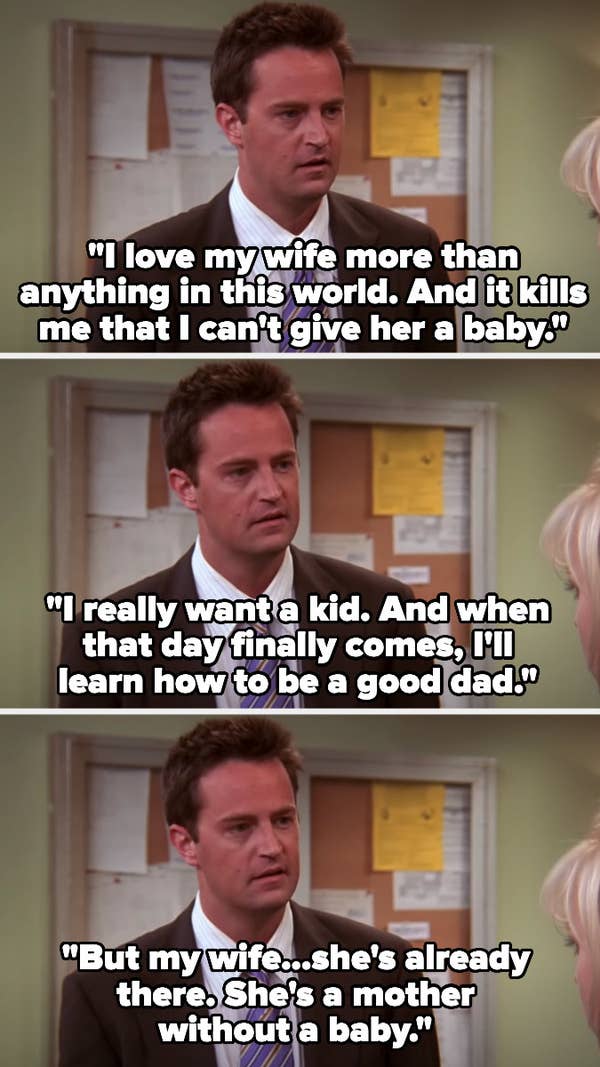 “I always cry in that episode of Friends when Monica and Chandler are trying to adopt and are mistaken for a reverend and a doctor and go along with it because they so desperately want a child. And when they come clean they almost don’t get the baby until (the part that makes me cry) Chandler gives that speech to Erica about how when he becomes a dad he will learn how to be a good father, and then he says, ‘But my wife, she’s already there. She’s a mother without a baby’…that line has me sobbing every time. Even just thinking about it makes me emotional.

19. In Golden Girls, when Sophia finally broke down over the death of her son: 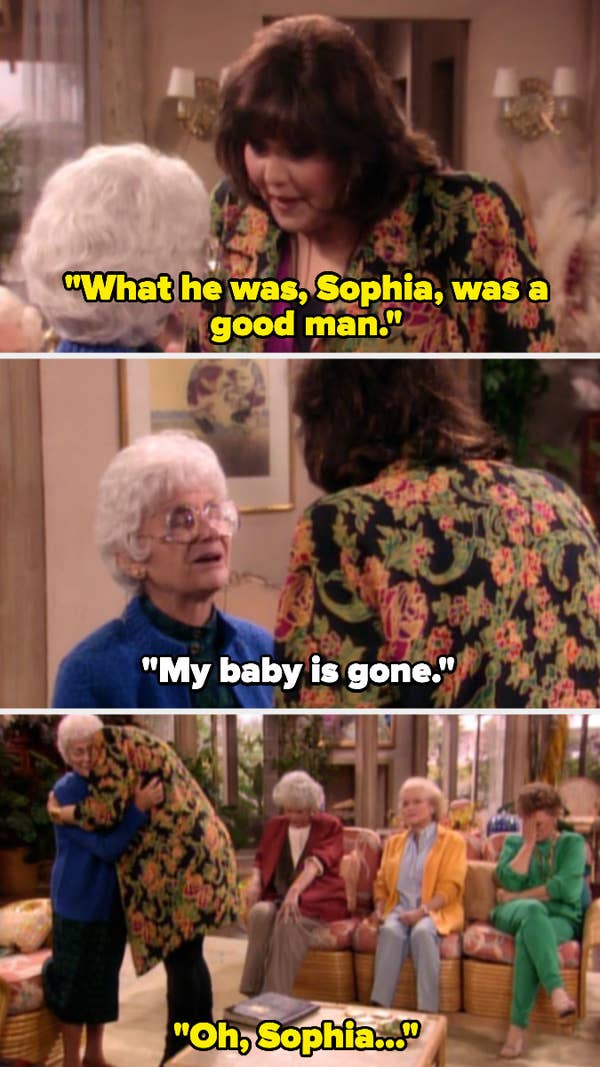 “When Sophia’s son Phil dies and she was mad at his wife because she didn’t stop him from wearing women’s clothing, but Sophia is mad at herself…At the end, when Sophia breaks down in Angela’s (Phil’s wife) arms, it hurts so bad.”

20. In Black-Ish, when Dre and Bow decided to separate and take space: