Let’s take a behind-the-scenes look at what really happened with these guests who tried to join the crew of Friends.

Reese Witherspoon was a fan-pleaser when she appeared as Rachel’s bratty little sister, Jill. Her character was catastrophically annoying, and fans ate it up. Reese had secured a 6-episode appearance schedule on Friends, so when she refused to come back after taping just two episodes, rumors began that she was mid-conflict with Jennifer Aniston. That couldn’t be further from the truth! These two leading ladies remain the closest of friends, even today. Reese was so intimidated by the sheer success of the show and the stars within it, that she was afraid to come back and not do the show justice.

It’s hard to imagine a star as significant as Brad Pitt would bomb during his appearance on Friends, but that’s precisely what happened. When Brad Pitt appeared as a Rachel-Greene hater from high school, he was actually married to her in real life. Sadly, this will forever be considered “the worst guest appearance” for this show. His performance was slammed by journalist Eric Deggans, who said; “Stilted reactions, overly exaggerated comedy, near-palpable self-consciousness – despite his cred as a film actor, Pitt knew he was out of his depth on a sitcom stage. After five minutes’ viewing, the audience did, too.”

This is one of the best coincidences of all time. Robin Williams and Billy Crystal were merely walking down the hallway at the NBC studio when one of the writers saw them in the building and asked if they’d like to appear. Their roles were completely unscripted, and they ad-libbed nearly everything that they said during this episode. Their cameo is one of the most talked-about, to this day.

Courteney Cox married David Arquette, so clearly she liked him… but producers of Friends really regretted his appearance on the show. He got along with everyone, so it wasn’t a personal issue, but when he played Phoebe’s stalker in 1996, that particular role, or perhaps the content portrayed, just didn’t resonate with the show as a whole. Producer Marta Kauffman weighed in by saying; “The stalker. We did a lot of re-writing to make that one work,” while David Crane looks back at the episode with the comment; “Really? We went with that?”

Julia Roberts Made A Guest Appearance… Then Went On To Date Matthew Perry!

This was one of the best stories to come out of a guest appearance on this show! Julia Roberts appeared as Susie Moss, a former classmate of Chandler’s from the past. She wanted to get him back for a prank he pulled on her during their childhood, so she faked her affection for him and roped him in, only to leave him naked in a restaurant bathroom, wearing nothing but her thong! The most adorable part of all of this – they sparked real-life chemistry after being paired up for this episode, and they ended up dating for several months!

Matt LeBlanc Was Terrified About Working With Susan Sarandon, And She Sang His Praises

It’s hard to imagine Matt LeBlanc being intimidated by anyone. He saw unprecedented success with his fame from Friends and made a bigger paycheck than most others in the industry, yet starring opposite Susan Sarandon really rattled him. She played Jessica Lockhart, the slapping soap opera actress starring opposite Dr. Drake Ramoray on Days Of Our Lives. In a fun twist, she was a huge fan of the show and was thrilled to be part of it. She later reported; “Matt LeBlanc was so sweet and patient that we actually did work past the panic to a place where we enjoyed ourselves.”

This is an interesting bet to lose! When Bruce Willis starred opposite Matthew Perry in the movie The Whole Nine Yards, they made a bet about the success of the movie. It turns out that Matthew Perry won that bet and Willis had to make an appearance on the show. He played Elizabeth’s father, Paul, and fans loved the dynamic he added. He continued to join in for numerous episodes. The best part… since he lost the bet, he appeared for free!

Paul Rudd May Have Played Phoebe’s Husband, But He Really Dated Jennifer Aniston

Paul Rudd played the role of Mike, the ever-patient husband of Phoebe who managed to embrace all her quirky notions and beliefs. Their wedding was a high-rated show, and his character very quickly became a regular one. However, in spite of dating and eventually marrying Phoebe on the show, he actually dated Jennifer Aniston in real life. The two were rumored to have a wee little fling before she hooked up with Brad Pitt.

George Clooney and Noah Wyle played doctors on ER, then came and graced the set of Friends with those roles as well. Fans went nuts, and NBC ratings went up on both of these hit shows. This was a natural pairing and in spite of the fact that Rachel and Monica made fools of themselves and lost out on their doctor-double-dates, Aniston and Clooney remained good friends. They’ve seen each other through various marriages and break ups, and are very close-knit to this day.

Charlie Sheen Liked It So Much, He Came Back Twice

Charlie Sheen played the role of Ryan, a love interest from Phoebe’s past who left her to join the Navy. When he returned after a mission, he wanted nothing more than to share time with his past love, but he discovered she had the Chicken Pox. He eventually got chickenpox too, and the results were hysterical! Charlie Sheen was only supposed to appear for one episode, but he ended up coming back for two. He loved his time there as much as fans loved seeing him as part of this show.

Brooke Shields Appeared Opposite Matt LeBlanc, Setting Her Then-Boyfriend Into A Fit Of Rage

Brooke Shields played a convincing and fabulously funny crazed fan of Joey’s when his character starred in Days Of Our Lives. During one of their scenes together, Shields licks the hand of Dr.Drake Ramoray in a seductive manner. Fans loved every moment of watching these two together, but Shields’ boyfriend at the time, Andre Agassi, had a very different reaction. According to the Mirror, “tennis player Agassi smashed every trophy he owned after watching from the sound stage while she licked the fingers of Matt’s character, Joey.” Whoa!

Sean Penn has long been known as “Mr. Anti-Hollywood”. Guest appearances aren’t really his thing, nor is the Hollywood lifestyle as a whole. Getting him to appear in one episode is a huge feat, but Friends managed to host him as a guest-star twice! He agreed to do this not because he was a fan of the show per se, but because his children were. Apparently, his kids who were aged 10 and 8 at the time were avid watchers of the show, so when producers asked him to participate, he agreed for the sake of his children.

Winona Ryder Was Saddened When Her Guest Appearance Was Ill-Received

Winona Ryder didn’t expect to be shunned after her appearance on Friends, but that’s exactly what the actress experienced. In a slightly awkward episode that didn’t quite follow the same vibe as the ones we’re used to, Ryder played the role of Melissa, a past friend of Rachel Greene’s from their college days. When the two shared a kiss, most assumed ratings would sky-rocket. Instead, fans slammed the show and were up in arms about the same-sex display. Many viewers that felt the show was successful enough in its own right didn’t need to rock the boat with a same-sex kiss.

The Audience Didn’t Clap When John Stamos Appeared On Set 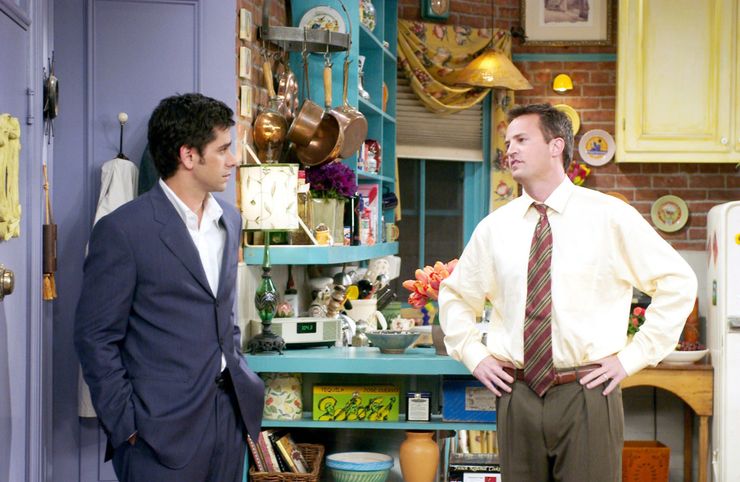 John Stamos didn’t get the warm reaction that he expected when he made a guest appearance on Friends. We’re sure nobody would have had guessed this would be the case, otherwise, he wouldn’t have been asked to appear, so it was actually a shock to everyone, not just him. Critics assessed the lack of enthusiasm after the fact, and their best guess is that the Full House star just didn’t resonate with the audience due to a lack of relevance with that age group.

We previously mentioned that Jennifer Aniston and Paul Rudd had a bit of a fling after he first appeared on the show. His role evolved into a much bigger one when his character married Phoebe, and towards the end of the show, he was a staple character who had made numerous appearances. Naturally, for the season finale, Rudd was by Phoebe’s side. Aware of the historical moment he was a part of, Rudd made what was supposed to be a funny comment about how they had all made it to the end of the show, which irked Aniston. He wasn’t one of the show’s original characters, and she didn’t respond very well to this last appearance.