First, remember when the phrase “It was way back in 2005” felt like a message from the future? Lord, it was a simpler time. 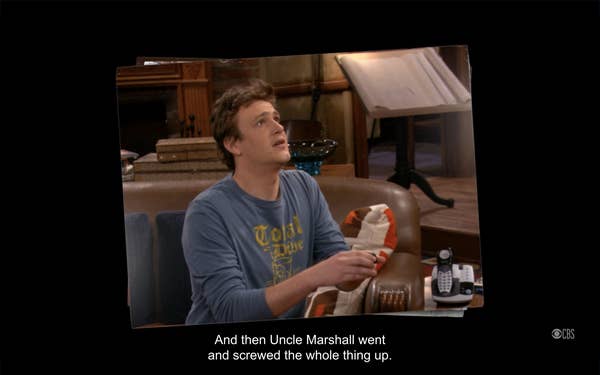 Okay, I know that this is obviously a joke™ — but I feel like this opening dichotomy of Ted being in emotional turmoil over his friends’ engagement shows his selfish streak. 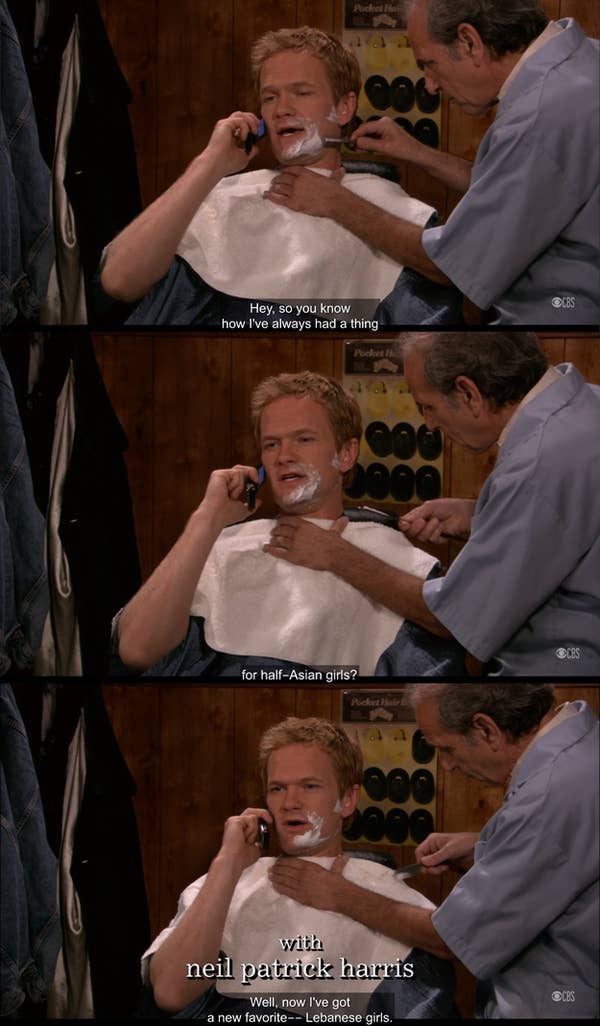 Now, if there was a character I would bet my money on being problematic with 2020 vision — it would clearly be none other than Barney Stinson. But come on. THIS is the first thing he utters on the show: 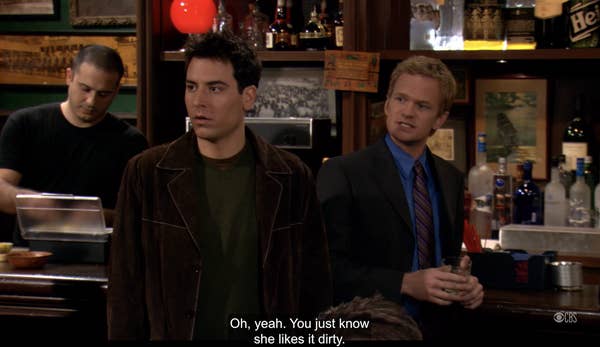 Then we have Barney’s first words about Robin. Of course the show is all, “What a lovable scamp!” about his gross comments.

But honestly, why are any of them friends with Barney? Why is he not the villain?

Next we have Lily, who accidentally got hit in the eye by a rogue champagne cork. The cab driver, Ranjit, asks if the injury is because Marshall hit Lily, and Lily responds by…yeah.

Then Ted actually goes out with Robin before she can go to Orlando for a week, and he literally says she’s not like other girls: 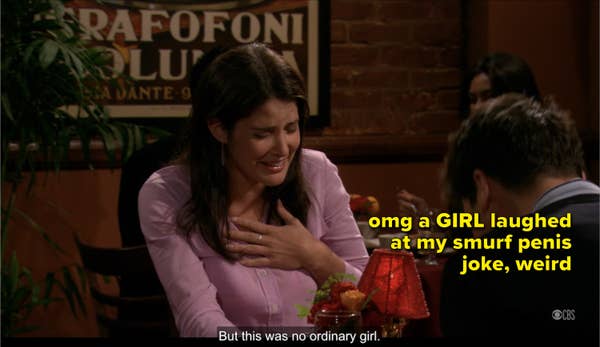 Alas, the date is thwarted by Robin’s coworkers. They refer to a person about to kill himself in an ongoing news story as a “jumper,” among other chillingly callous and derogatory language.

Now, I know that this woman is not one of the main “friends” of HIMYM — but still, Robin is just like, “Yup, sounds good, let’s get into the van.”

So Ted doesn’t kiss Robin in front of her coworkers who have just discussed suicide, which feels valid. Well, that is until Lily comes out with this yikes comment: 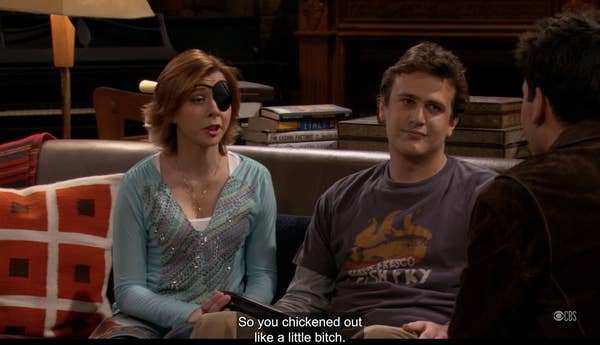 To seek more heinous advice, they turn to Barney. He also thinks that Ted should have kissed Robin, and forcefully kisses Marshall without his consent to…prove it? 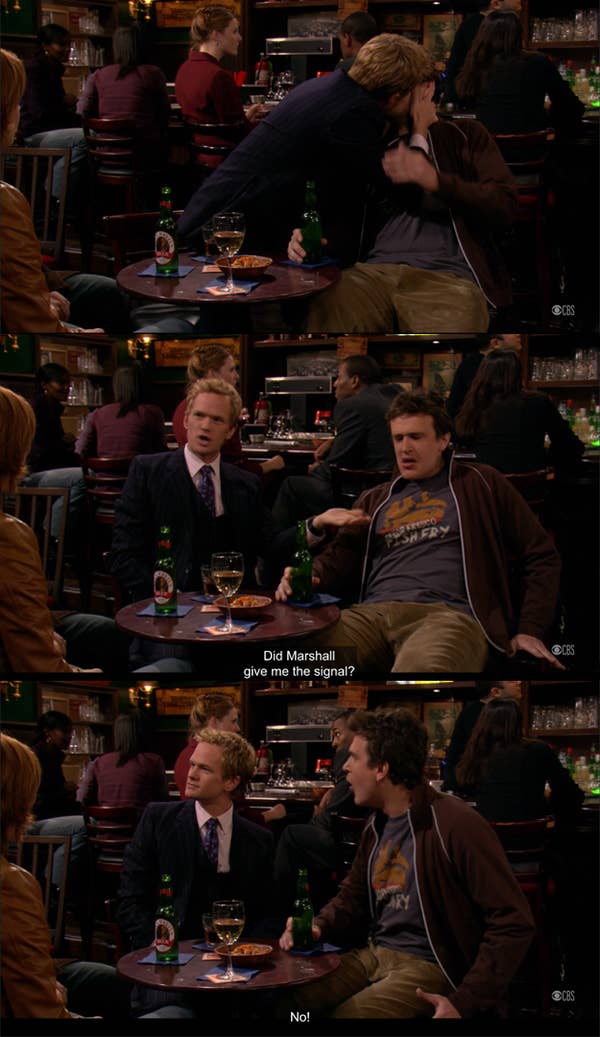 This actually convinces Ted to change his mind.

Seriously, this may be some of the worst dating advice I’ve heard on a TV show in a hot minute. It would be totally normal for Ted not to see Robin for a week, even if she wasn’t going to Orlando. 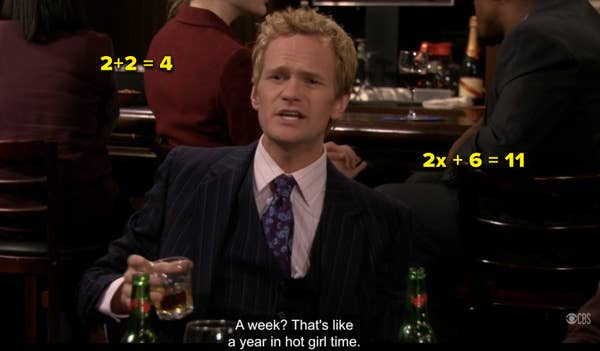 Ted follows the love experts, and we get the infamous blue French horn. Nothing like a bit of theft and showing up unannounced in the middle of the night to get the girl of yo’ dreams. 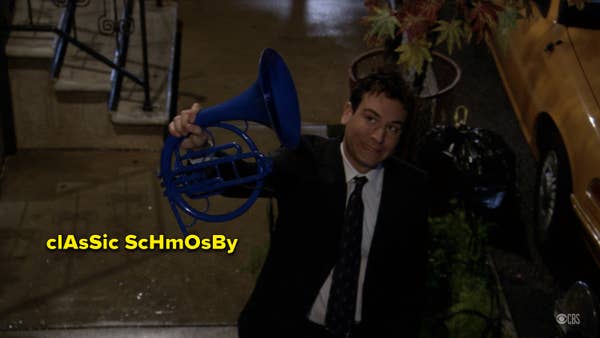 Again, they JUST met and had ONE date.

Meanwhile, Barney assumes that Ranjit, who is from Bangladesh, is from Lebanon — because that “joke” just won’t quit.

Again, and I cannot stress this enough: Why do any of them hang out with Barney?

While Lily is trying to get away from her supposed friend, Ted is pulling the ol’ too-much-too-soon. If this were real life, this whole kerfuffle would be the mother of red flags. To me, this is Ted’s biggest character flaw: He’s so desperate to find a wife that he doesn’t actually listen to the women he’s dating. Here’s hoping he learns! 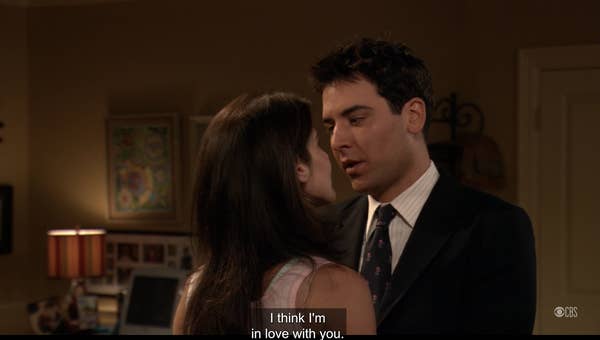 In short, me @ most of the characters now: