For 10 seasons, fans watch the characters of Friends as they move in and out of relationships. Monica found her true love in Chandler and Rachel gave her lobster, Ross, a second chance. Even Phoebe found love in a man who Joey happened to find at Central Perk. 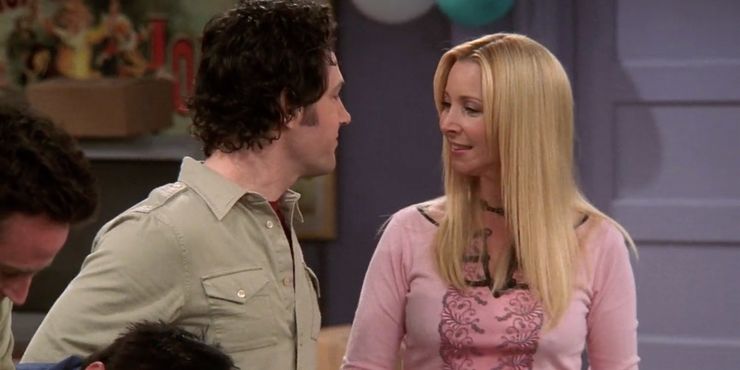 In the final episode of the show, Monica surprises that gang coming home with twins. Everyone is elated and shocked at the news. While everyone marvels at the twins, Mike tells Pheobe that he wants his own. Phoebe being Phoebe makes the joke that Mike should tell her which twin he wants and she’ll sneak one under her coat.

Mike is being serious and Phoebe says she wants a whole bunch, like the Von Trapp family. This is a sweet moment as fans know how hard it was for Phoebe to give up the triplets after birth. Phoebe found someone whose more than willing to have the big family she’s always wanted. 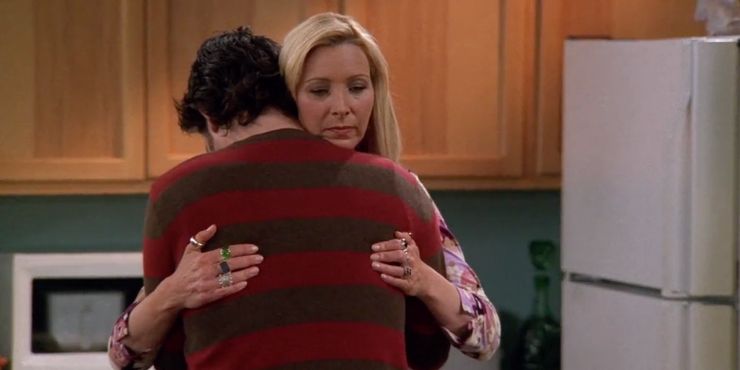 In episode 16 of the ninth season of Friends, there was a critical moment in Mike and Phoebe’s relationship. It wasn’t necessarily the happiest, but it hashed out underlying issues.

Phoebe and Mike plan to move in together and the topic of marriage comes up. Mike wants to make clear that he’s not planning on getting married. Phoebe is on board, originally thinking Mike is only talking about not getting married in the near future. But Mike tells her the hurtful truth that he doesn’t want to get married ever again because of his bad divorce from his ex. Phoebe may be unconventional, but she does want to get married, so she and Mike call it off. 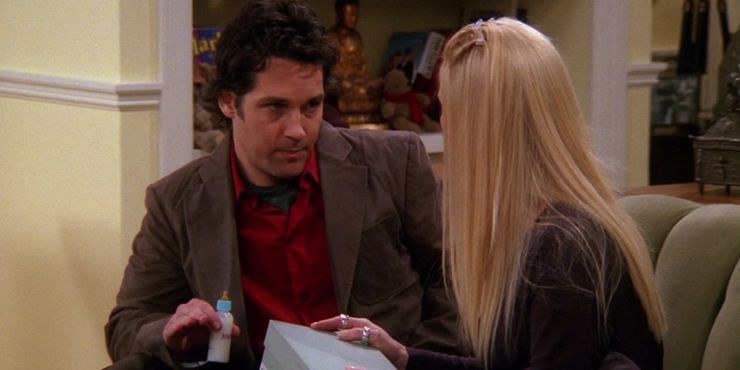 Phoebe has always been a little out there, but it makes her a lovable character. So it was no surprise that when Mike finds a rat in her cupboard, she’s not shocked as it’s her pet rat, Bob. Phoebe compromises with Mike to get rid of him, but when Mike sets up a trap, he accidentally kills Bob.

Mike is somewhat on board with the rat babies becoming their responsibility. Later, at home, Mike makes her realize that rats will breed despite being siblings. Phoebe comes to the sad conclusion that she has to let them go and Mike is there to comfort her. 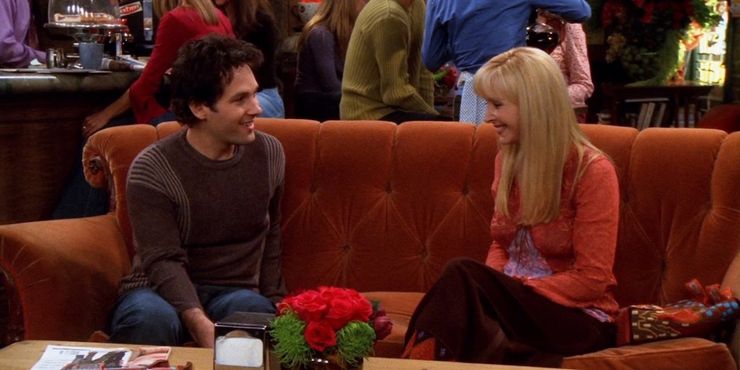 Leave it up to Mike and Phoebe to meet in the most unusual circumstances. Phoebe and Joey make a deal to set each other up on blind dates. While Phoebe keeps her end of the deal, Joey completely forgets. In a rush to find a suitor, he yells “Mike” in Central Perk and actually finds Phoebe a date.

Their date doesn’t go well, though, as Phoebe realizes that Mike and Joey don’t actually know each other. Later on, Mike approaches Phoebe at Central Perk apologizing and wanting to get to know her. When Mike tells her he’s a pianist, she makes him showcase his true talent, even with no piano in sight. 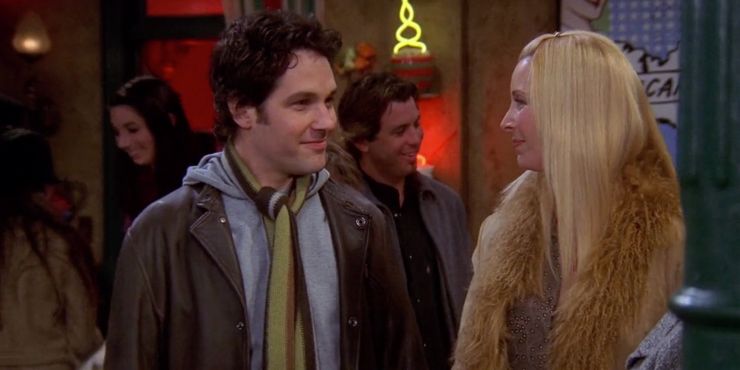 In episode 14 of the tenth season of Friends, Phoebe learns that she can change her name to anything she wants. She was planning on taking Mike’s last name but instead goes for Princess Consuela Bananahammock. It’s very Phoebe, but Mike sees it as a bit of a problem.

Phoebe is set in keeping her new name, so Mike retaliates. He changes his name to Crap Bag. Introducing your new husband as Crap Bag doesn’t sit well with Phoebe. She finally understands where Mike is coming from and instead goes with Phoebe Buffay-Hannigan. It’s sweet to know that Mike is more than happy to play along with Phoebe’s antics 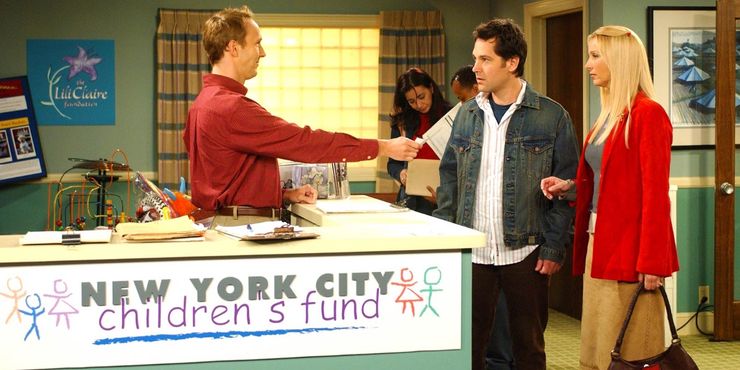 Mike comes from a very affluent and rich family, something Phoebe has never experienced. Because Phoebe is so kind-hearted, she feels like the money used for their wedding should go to a better purpose. She comes up with the plan to donate it to a children’s charity. Mike sees how good-hearted she is and agrees, as all he cares about is marrying Phoebe.

But Phoebe soon changes her mind feeling like she deserves a lavish wedding. Mike is stuck in the middle between doing the right thing and supporting Phoebe. At the charity office, Mike tries to put his foot down and make a decision, but can’t. The worker becomes so fed up that he gives them the check back. 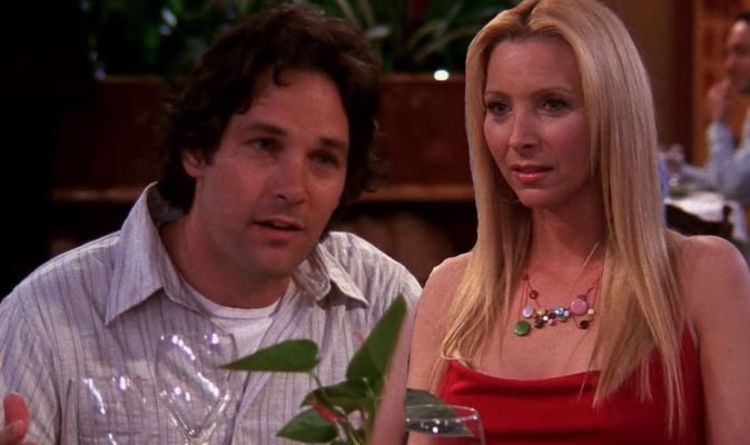 By the end of season nine, Phoebe and Mike are no longer together. Instead, Phoebe gets back together with David. It’s clear that Phoebe is still hung up on Mike and David thinks he has to propose to keep Phoebe. But while on the Barbados trip, Mike appears and tries to win Phoebe back.

He goes into a heartfelt monologue saying there was really no reason why they’re apart. He can’t imagine losing her and proposes. Comically, Phoebe says no. She never wanted a proposal but rather the assurance that they are going to have a future together. Mike ends it by saying, ‘We can have any future you want.”

3.Standing Up To Mike’s Parents 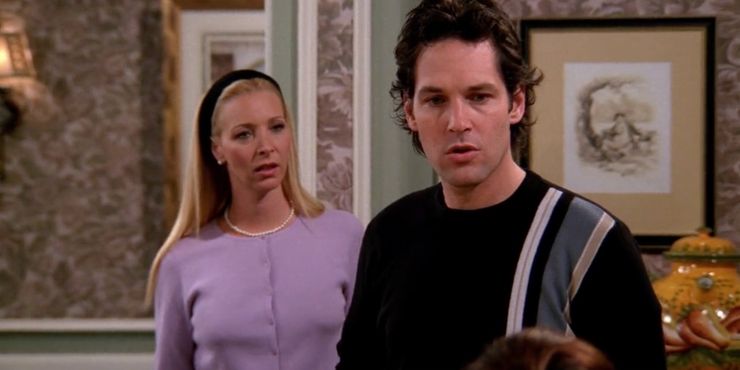 Phoebe grew up on the streets and with no real parental figures, so when it’s time to meet Mike’s parents, she tries to impress them by being someone she’s not. She fixes her hair, wears pearls and pantyhose. Mike’s parents are upper class and find Phoebe to be too eccentric for their taste.

Mike tries to reassure her, but it doesn’t go well. Phoebe accidentally hits Mike’s father where he had surgery and tells his mother about how great Mike is in bed. While she’s away from the table, Mike’s parents talk about how bizarre Phoebe is. They even try to sway Mike to find someone else. But Mike stands up for Phoebe and admits that he loves her. 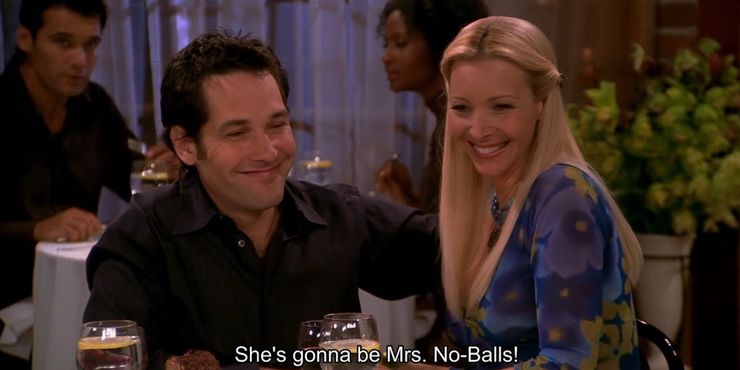 The Barbados proposal didn’t actually end in a proposal. In episode five of the 10th season, Phoebe accidentally ruins Mike’s shot at proposing. It’s their one-year anniversary and they go to a basketball game. On the Jumbotron, another couple is getting engaged and Phoebe expresses that such a proposal is tacky and impersonal.

Phoebe’s now afraid that Mike will never propose and instead decides to ask him herself, but this only embarrasses him. Later, at dinner, Mike finally asks Phoebe to marry him and the rest is history.

Phoebe and Mike’s wedding finally happens. But after the disastrous dinner rehearsal, it actually gets worse. On the special day, there’s a huge snowstorm that ruins their plans. Upset over not being able to get married how they wanted, Monica gives them a glimmer of hope.

Phoebe always wanted to get married outdoors and so they instead hold their wedding in the snow outside Central Perk. Phoebe looks radiant in her wedding dress as Chandler walks her down the aisle. Joey is the one to marry Mike and Phoebe. They give their heartfelt vows and Phoebe finally gets the family she always wanted. The wedding wasn’t ideal, but it was perfect.